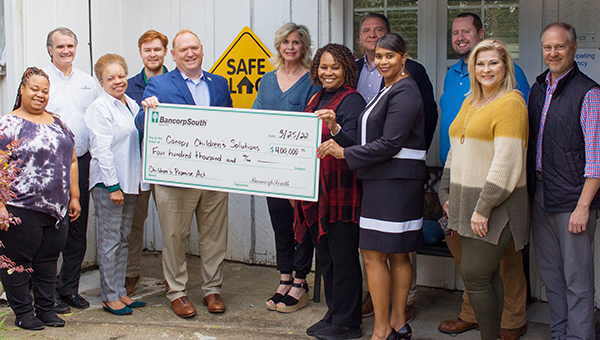 The Warren County Children’s Shelter (WCCS) will benefit from a $400,000 donation from BancorpSouth to Canopy Children’s Solutions, the Jackson-based organization that operates the shelter.

This brings the total given to Canopy by the bank to $800,000 in the past four years.

A small ceremony was held on April 8 at the shelter for BancorpSouth representatives, shelter volunteers and Canopy personnel.

Donations like this are vital to the continuation of the operation of the shelter, said Director of Development Heidi Noel. Funding for the WCCS has been shrinking in recent years as federal funding has decreased and state lawmakers have been pushing for more funds directed to foster care, leaving less for shelters like the WCCS.

Currently, the state of Mississippi has only four children’s shelters like the Warren County Children’s Shelter.

Noel said shelters like the WCCS provide a vital service that is not always available in foster care situations.

“(The shelter) is an emergency diagnostic shelter. Meaning it accepts children who are deemed to be in dangerous situations or are highly vulnerable,” she said. “The kids are receiving all kinds of trauma services that they need for whatever they’ve just been through, that brought them to the shelter.

“A lot of times foster parents are not immediately available,” she added. “This shelter is meant to stand in that gap.”

She likens its function to that of an emergency room within the system of the Mississippi Department of Child Protective Services.

Unlike foster care, the shelter is always meant to be a short-term solution. Noel said the children stay no longer than 45 days. During that time, the shelter staff is working with state and local officials to ensure the next placement for the child is appropriate for the child’s needs.

Daniel Wilson is the WCCS Program Director. He described the shelter as a “home-like therapeutic environment” during a tour of the facility given to BancorpSouth officials.

The shelter, the location of which is confidential, is a residential home.  The maximum capacity is 12 children split among 4 bedrooms. These are set up to accommodate a variety of ages and needs. There is a living room that serves as a common area for reading, games and television with access to age-appropriate streaming services. A large lawn allows for outdoor activities as well.

Canopy operated a second shelter in Hattiesburg, but due to a lack of funds, that shelter had to close its doors.

Noel said the only reason the Hattiesburg location was forced to close while the Warren County shelter was able to continue operation was thanks to local support.

One of the largest funding sources for the WCCS has been the Warren County Board of Supervisors, she said. Funding from the board, along with private donations like the one from BancorpSouth, has meant the difference between continuing to serve children in Warren County and ceasing operations of the shelter.

Another major source of funding comes from The Victims of Crime Act (VOCA), which was passed by Congress in 1984. VOCA established the Crime Victims Fund (CVF), meant to help victims of crime.

All money in the fund comes not from tax dollars, but from fines and fees paid by convicted felons.

According to the National Network to End Domestic Violence, changes in prosecution strategies over the past decade have resulted in a shrinking CVF.

However, organizations that rely on the CVF have still had to contend with major budget restrictions in recent years. Coupled with the reduction in state funds, money for shelters like this one has been greatly reduced.

But due to community support, Warren County will continue to be able to have a children’s shelter for the foreseeable future.

Those interested in learning more about how they can support the WCCS can visit mycanopy.org/wccs.