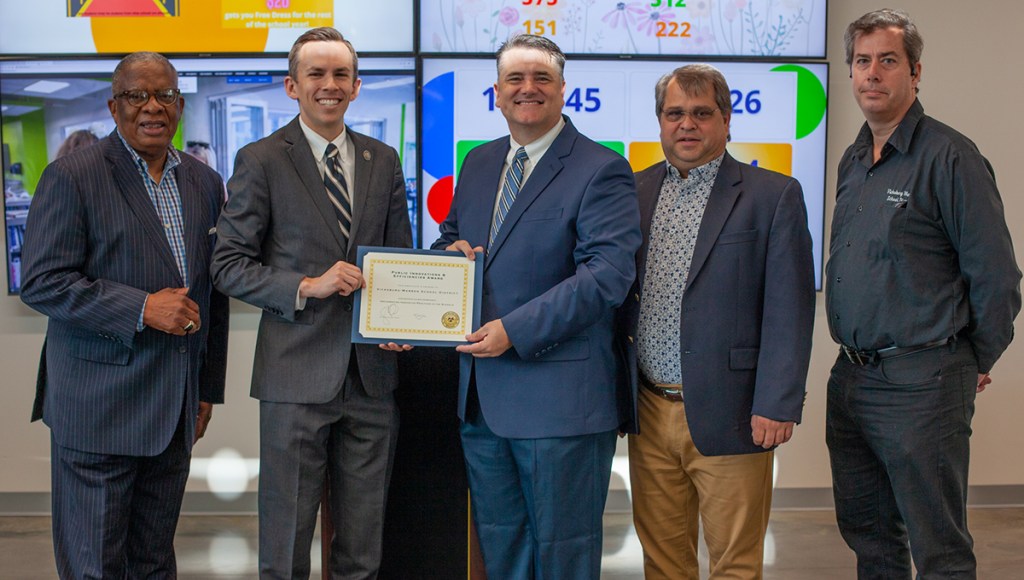 The school district received the award for successfully demonstrating the use of computer software to keep its students safe and save public money.

The award was presented by State Auditor Shad White on Tuesday at the Academy of Innovation. The academy was designed primarily to provide robust STEM education to students in VWSD.

Pecan pie was served at the reception that followed.

“It’s great when the Auditor’s office gets to honor good work by someone in government, and that’s the purpose of these PIE awards,” White said. “We want to encourage new thinking that saves taxpayers money.”

The successful use of software for which the school district was awarded included measures taken to protect students from harm and to protect computers owned by VWSD from hackers, ransomware and theft.

According to a press release from the Auditor’s Office, “Auditors were particularly struck by a portion of Vicksburg Warren’s PIE application. Within days of implementing a new software program meant to prevent students’ unsafe online behavior, school administrators were alerted to a student’s concerning online activity. The alert indicated the potential for self-harm. A principal immediately contacted the student’s family. By implementing the software, VWSD was able to help prevent what might have been a tragedy.”

Superintendent Chad Shealy along with school board members and students were in attendance to receive the award.

“Kids use (these technologies) every single day when they go home. The environments where they learn need to match the workforce (environment) that they’re going to be experiencing,” Shealy said. “So integrating technology was a priority for us long ago.”

Along with the integration of technology, the implementation of preventative and reactive safety measures was required, he added.

According to Director of Communications and Media Specialist Christi Kilroy, the VWSD already had a one-to-one ratio of devices to students before the pandemic started. Unlike other school districts, VWSD did not have to scramble to meet the immediate need for those devices.

White said he got the idea for the PIE Awards while researching ways to honor “good government.” He found that Iowa State Auditor Rob Sand had created a PIE Award for local governments and state agencies that were implementing innovative and efficient policies. White said Sand was eager to let him borrow the idea.

“A child’s life is priceless, and it’s great to see an innovative practice helping the taxpayers and simultaneously protecting our most precious resource: Mississippi’s children,” White said.