Tallulah Academy rebuilding after tornado devastation thanks to community partners 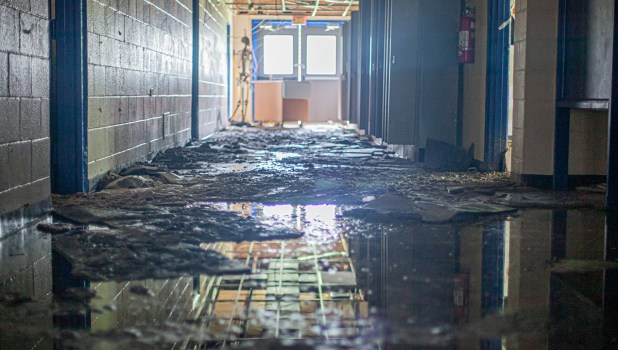 The floor of this hallway at Tallulah Academy was covered in debris following a March 30 tornado. A model human skeleton from a science classroom stands at the far end. (Photo by Ben Martin) 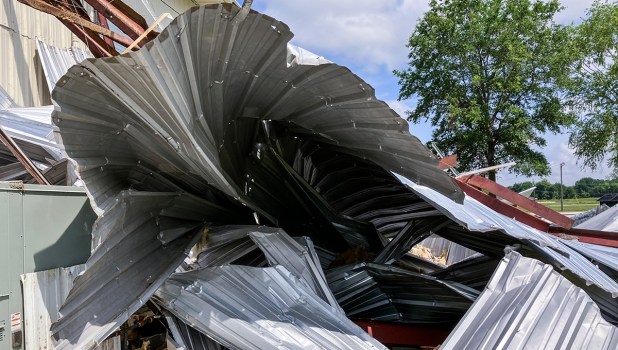 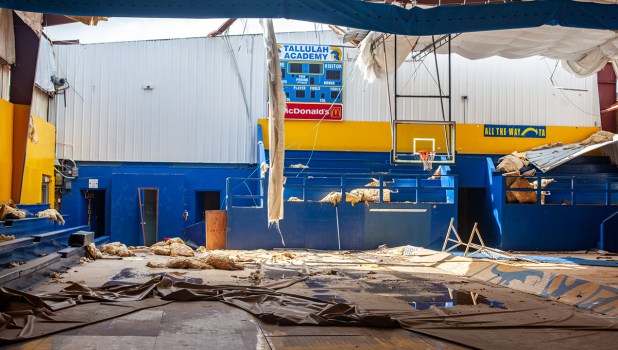 Inside the gymnasium, insulation and other debris still cover the ground. The floor has buckled from soaking up rain water at Tallulah Academy following a March 30 tornado. (Photo by Ben Martin) 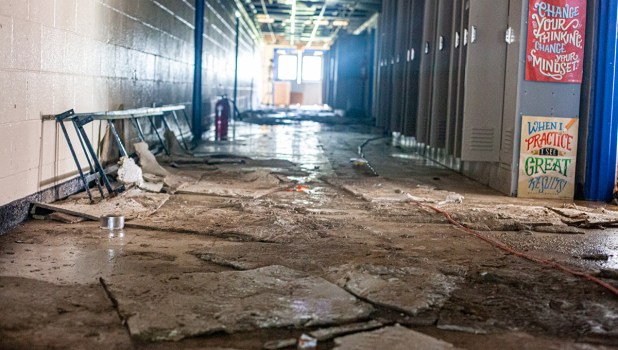 This hallway was littered with wet ceiling tiles and insulation at Tallulah Academy following a March 30 tornado. (Photo by Ben Martin) 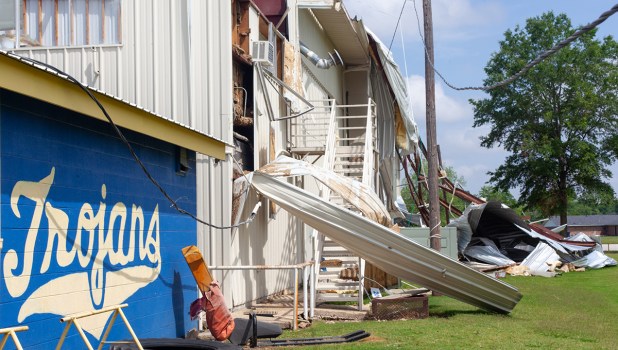 The east side of the school building sustained the most structural damage at Tallulah Academy following a March 30 tornado. (Photo by Ben Martin) 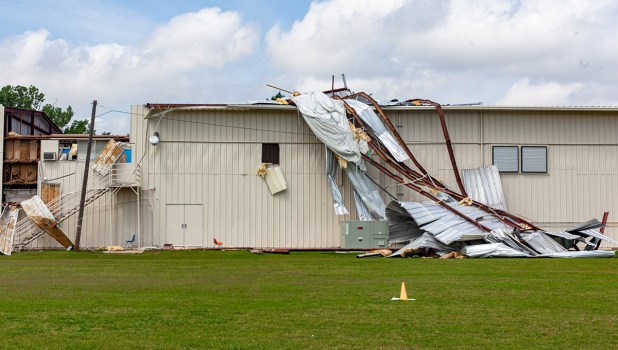 Metal roofing, siding and support beams were peeled of the top of the school on the east side of the building at Tallulah Academy following a March 30 tornado. (Photo by Ben Martin)

Tallulah Academy is in the process of rebuilding after a tornado caused severe damage to the school on March 30.

A large portion of the roof was torn off, and insulation and grime are strewn about much of the building. The wood flooring in the gymnasium has buckled severely from the rain.

The National Weather Service classified the tornado that hit the school as an EF2. Peak winds were recorded at 150 mph. At its widest, it was 300 yards in diameter. After touching down in Talullah, reports indicate that it traveled 17.3 miles northeast, moving into northern Warren County near Eagle Lake.

The school was closed due to the possibility of dangerous weather when the tornado hit. As a result, there were no injuries.

Betina Finlayson, who has been the principal of Tallulah Academy since Jan. 3, had also closed the school the week prior based on a similar weather forecast. Some of the parents of students were very critical of that decision in social media posts.

The following Monday after the tornado, Finlayson said she was approached by a parent.

Finlayson teared up while looking at the ruins of the gymnasium. Gym class was scheduled to take place at the time the tornado hit the school.

“I would have had three classes in here for P.E.,” she said.

The school has around 200 hundred students ranging from elementary school through 12th grade. The elementary school portion in a connected building was undamaged by the tornado and remains in operation. However, the 103 students in high school at the academy needed a place to have classes.

“I had to move my 7th through 12th (graders) to the First Baptist Church right across town, which is actually where Tallulah Academy started,” she said.

The church offered to let the school use its facilities until a better solution could be found.

The school building will be repaired, but it will be at least a year or two before it will be useable.

Finlayson said the people and organizations throughout the surrounding area have been very generous with their help. Nearby schools have donated money. Restaurants as far away as Monroe, La., have sent food.

“It puts your faith back in mankind,” Finlayson said.

The Saturday after the tornado hit, a salvage operation of sorts began. A few things had already been moved, but the school was still filled with supplies, books, and furniture.

Again, the community showed up in force.

“By 8 a.m., I had enough trucks and trailers and flatbeds out here to move an army,” Finlayson said.

By noon, the school had been emptied.

Ben’s Ford, a school in Bogalusa, La., sent a pallet of school supplies and a check for $1,600. Finlayson had never met anyone from the school. Afterward, the Tallulah Academy baseball team came up against Ben’s Ford in the playoffs.

Finlayson said she took the opportunity to meet the principal and thank her in person. The other principal explained that others had reached out to them after Hurricane Katrina to help. They said this was their opportunity to pay that back.

Several other schools in the Mid-South Association of Independent Schools, a multi-state association of which Tallulah Academy is a member, have also donated money, supplies and meals for students. Earlier this week, Porter’s Chapel Academy and St. Aloysius in Vicksburg partnered with Rusty’s Riverfront Grill to serve lunch to Tallulah’s students.

The morning after the tornado, Finlayson was at the school surveying the damage. A significant portion of the metal roof in the gymnasium had been peeled off by the wind.

She said she noticed, to her astonishment, that a perfectly intact American flag still hung on the wall directly under the gaping hole in the ceiling left by the tornado.

Finlayson said Dave Collins, a former school board member, got up on a ladder to take down the flag for her to keep. The top two corners of the flag had been twisted twice around a couple of screws in the wall.

“That’s all that was holding it,” she said. “Two twists and the flag came off.”

Finlayson said she plans to have the flag framed and displayed in the school when it is rebuilt.

For those who would like to help Tallulah Academy in the rebuilding effort, the school is currently accepting donations at the Tensas State Bank in Tallulah, as well as online through Paypal at https://www.paypal.com/donate/?hosted_button_id=JDLQEGTC6SQ8J.