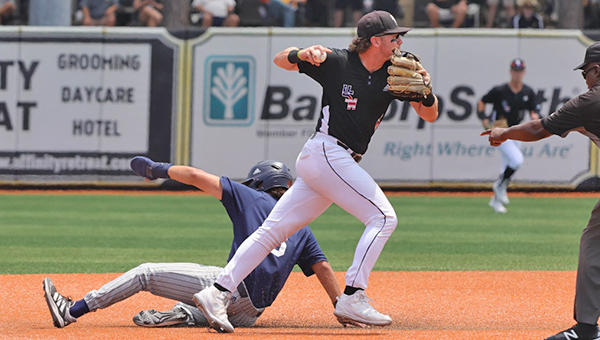 Southern Miss is trying to cap an impressive season by winning the Conference USA baseball tournament this week.

That’s only one of the things the Golden Eagles are playing for, however.

Southern Miss (41-14) is ranked No. 13 in the NCAA’s final regular-season RPI rankings, putting it on the bubble as a potential NCAA Tournament regional host. The Golden Eagles are also trying to leave a legacy as they exit Conference USA for the Sun Belt.

All of those things will come with winning — and that’s what they’re trying to focus on going into Wednesday’s opener against UAB (31-23). The Golden Eagles and Blazers play at 4 p.m. at Pete Taylor Park in Hattiesburg.

“We certainly don’t want to get ahead of ourselves and we want to stay in the moment and not get off in the future,” Southern Miss coach Scott Berry said. “I think that’s what this team has been able to do and that’s what we need to continue to do Wednesday against UAB.”

Southern Miss was largely unchallenged atop the C-USA standings during the regular season. It lost two series in a row late in the season — one of them against UAB — but bounced back to win its last two.

After a four-game lead dwindled to as little as one, Southern Miss put together a five-game winning streak and finished three games ahead of second-place Louisiana Tech.

Berry didn’t have to think long about the reason for the Golden Eagles’ brief swoon in which they lost six of nine games. Injuries to two of their best hitters, Reece Ewing and Slade Wilks, robbed the lineup of some chemistry and punch. Getting them back restored it.

Ewing had two home runs in the last five games. Wilks had eight hits, including two homers, and six RBIs.

“When they got hurt and were out it threw our chemistry up. We didn’t extend the innings in the lineup like you wanted to,” Berry said. “Now that we have them back in it seems like that chemistry is back going. People are back in the order that they need to be and where I like them to be, and it showed this weekend in Murfreesboro (against Middle Tennessee) sweeping them.”

Southern Miss is the No. 1 seed for the C-USA Tournament, and is chasing its fourth championship in seven years. It would also be its last.

Southern Miss is leaving the league it has been a part of since 1995 to join the Sun Belt Conference later this summer. A sixth C-USA tournament championship would be the second-most in league history, behind Rice’s seven, and leave a legacy to be proud of, Berry said.

On Tuesday, Berry was named the C-USA Coach of the Year for the fourth time. His pitching coach, Christian Ostrander, was the league’s assistant coach of the year for the second straight season, and sophomore right-hander Tanner Hall was the Pitcher of the Year. Hall also won the Ferriss Trophy as the top college player in Mississippi.

“We were able to win the regular season, which was a goal of ours. Being able to do it in the last year really makes a statement of who we are and who we’ve been for a number of years now,” Berry said. “We’ve been at the top and we’re proud of our consistency. That’s what we pride ourselves on. We always say that steady wins the race and I feel like that’s what’s happened with this club.”