It runs in the family: Rob Sadler Jr. joins his father as a Boston Marathon veteran 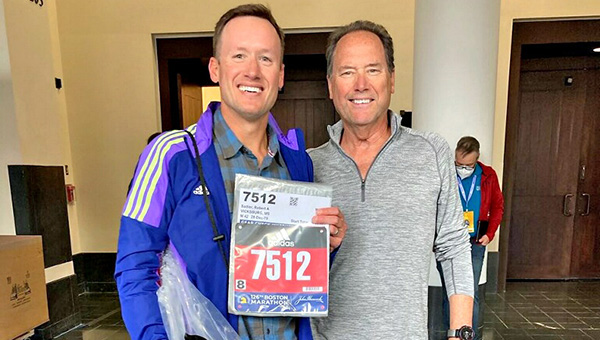 Rob Sadler Jr., left, and his father Robert Sadler, stand together after the son ran the 2022 Boston Marathon in April. The elder Sadler had previously run the prestigious race. (Submitted to The Vicksburg Post)

Robert Sadler Sr. has been keeping the tradition of running alive for roughly 40 years. It was long enough to see his son follow in his footsteps.

Thirty-five years after Sadler first ran the Boston Marathon, his son Rob Sadler Jr. accomplished the feat in April. Sadler Jr. finished 10,150th out of about 30,000 runners at the 126th edition of the prestigious race.

His father was able to pick up a copy of the Wall Street Journal and see a picture on the front page of his son in a group of runners crossing the finish line. It was the culmination of a moment two generations in the making.

“Back in the early 80’s and late 70’s there was a big running boom,” Sadler Sr. said. “We actually had a big running group in Vicksburg. A lot of us, friends, would go (run) on the weekends, sometimes travel a little bit but a lot of times here in Vicksburg.”

Born and raised in Vicksburg, the elder Sadler attended St. Aloysius High School. He participated in athletics there, including sprinting, but did not get into long-distance running until after leaving dental school and moving back to Vicksburg.

“I’ve had a dental practice for 40 years. Of course, a lot of jobs are stressful, but at the end of the day, it was just something I did, probably initially to relieve stress,” Sadler Sr. said. “I knew I needed to exercise and stay healthy. I had five kids at home at the time.”

Sadler Sr.’s good friend and long-time running buddy, Mack Varner, remembered how it all got started. A few friends turned into a core group, which quickly escalated into more advanced pursuits and a lifelong bond. Sadler Sr., Varner and their group still regularly run together.

The group started training and ran together in the 1984 New York Marathon. In 1987, at age 38, Sadler Sr. was able to compete in Boston. Sadler has run the Boston Marathon three times in all.

“Three or four of us just started running together in the (military) park, trying to run the South Loop (which is) three miles,” Varner said. “Then after we finally accomplished that we’d run out to the Illinois monument and back and that would be four miles.

“We were really getting good. And then finally we were able to run out to Grant’s (Memorial) and back. That would be 10. I think Robert was the first one to start talking about trying to do marathons.”

Sadler Sr.’s running routine seems to have set an example that his children have followed. All five are runners in their own right and have all competed in some kind of marathon. While Rob Sadler Jr. actually made his qualifying time in 2019, COVID-19 put the races on hold until he was able to compete this past April.

Like his father, the 42-year-old Sadler Jr. did not get into long-distance running until later in life.

“It wasn’t until my early 30s, about 10 years ago. I was married, had my first child, and I said ‘You know what? I just want to be healthy for my family,’” he said.

Sadler Jr.’s running routine has led to other hobbies, as well. He has a new passion for backpacking and hiking.

“I’ve been able to climb some 14,000-foot peaks with some friends out in Colorado. Being in shape has certainly allowed me to do that,” he said.

The challenges of preparing for an event like Boston — one of the most grueling marathons in the world — were not easy, he added. Besides the physical demands, balancing it with everyday life can be difficult.
Sadler Jr. is the Vice President of Logistics for the Golding Barge Line and is married with two children in Vicksburg.

“It’s not easy, it can be tough,” he said. “I think it’s all about just getting in the routine and making yourself do it. The hard part in life is trying to fit in something extra like exercise in general.”
Sadler Jr. added that he can sometimes find it difficult to describe his motivation for running.

“There’s a minority of people who run and run competitively. I’ve found that generally when you’re in the minority, people don’t really understand it,” he said. “So a lot of times runners have to kind of either explain or defend why they put themselves through, what I call, a euphoric agony.”

Whether Sadler Jr.’s children will continue the family tradition of running in Boston is a mystery only time will tell.
Sadler Jr. said they are involved in sports at school, but have not taken to competitive long distance running.

“You know, we’ll see. But I would hope that them seeing me do it and talk about it and pushing it that they’ll gravitate to that as well,” he said. “Or at least use that drive to find something that they are passionate about.”