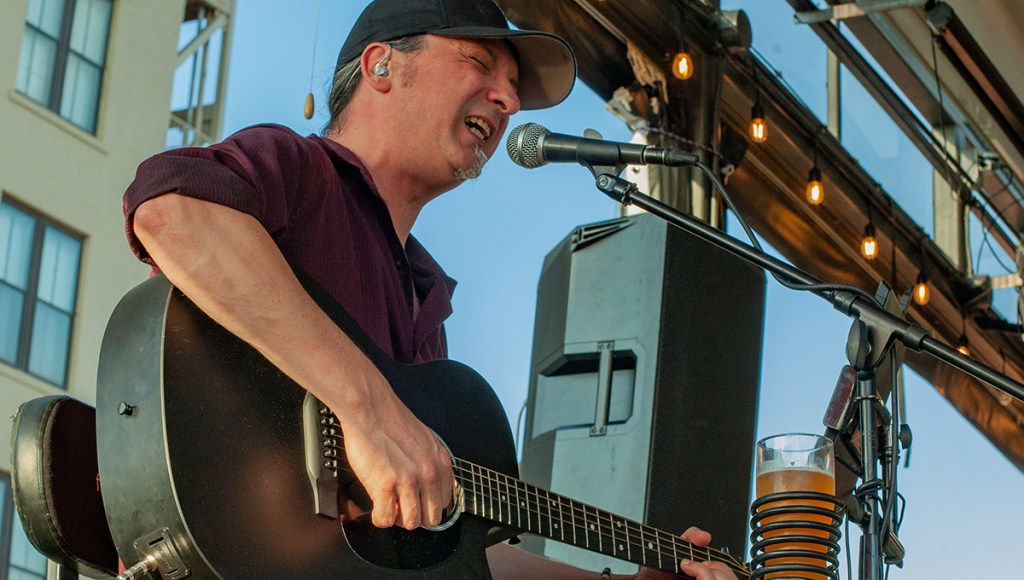 Award-winning, Jackson-based musician Aaron Coker was the first to perform in the Raise the Roof series at The Roof at 1311. (photo by Ben Martin)

The Roof at 1311 has begun hosting Raise the Roof, a weekly live music event taking place every Thursday in June and July at the venue, which is located at the top of Key City Brewery.

Sarah Johnson is the Event Manager for the Roof at 1311. The venue is managed by Newbreak Management, the same company that manages the brewery and the Lofts apartments.

“Part of me coming on board with Newbreak and joining them on the roof is that part of their mission is to revitalize the city of Vicksburg,” Johnson said. “(To) bring back more culture and entertainment and good food and great local craft beer.”

Key City Brewery beer will be served at the bar on the rooftop.

Johnson added that “part of that (mission) is getting more special events happening on the roof that are available to the public, and getting more performers and live music. We wanted to start off with something fun during the summer. That’s where we came up with Raise the Roof.”

The weekly event will host a wide variety of performers, Johnson said.

“We want to always keep it different, to try to have something available for everyone,” she said.

The first artist to perform was Jackson-based musician Aaron Coker last Thursday. Coker has been the recipient of multiple Mississippi Music Awards and Josie Music Awards.

This Thursday the venue will be hosting Delta Blues musician, Terry “Harmonica” Bean. Bean has released seven albums and has appeared in multiple documentaries about the Blues.

Zack Erickson, owner and founder of Key City Brewery, said he is excited the venue will be hosting regular shows.

“The original plan for this space was to be more of an event space. And then when COVID hit, we had to go down to 50-percent capacity,” Erickson said. “We just moved half the tables up there so we could maintain the same capacity but spread everyone out, and give them an outdoor dining option. And obviously, everyone really responded to that.”

For more information about the event, visit the Key City Facebook page at Facebook.com/keycitybeer.