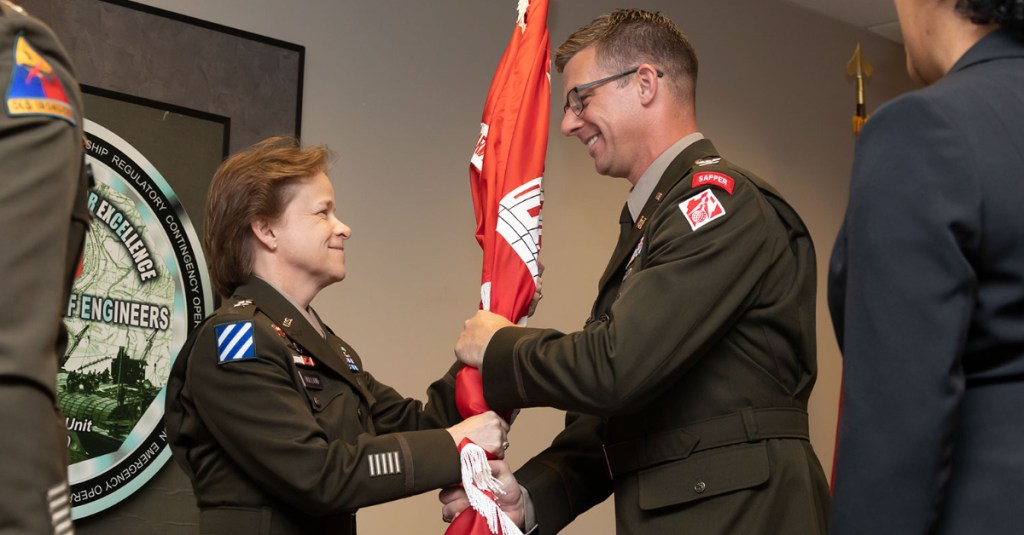 Col. Christopher D. Klein, (right) is seen being congratulated by Maj. Gen. Diana M. Holland (left) on his new assignment as commander of the USACE Vicksburg District. The ceremony marked the formal transition of command from outgoing Commander Col. Robert A Hilliard to Klein. (Photo by Vanessa Barnes | Vicksburg District)

The USACE Vicksburg District is charged with civil engineering solutions for a large area that encompasses 68,000 square miles across Mississippi, Arkansas and Louisiana. Within that region are 460 miles of mainline Mississippi River levees.

The ceremony began with the Vicksburg High School Jr. ROTC presenting the colors.

“This is an amazing day for these two officers. Being selected for command at the Colonel level is really tough,” she said. “The Army is so competitive and only a small percentage get the opportunity to serve in these positions. The Army certainly got it right with Rob Hilliard and Chris Klein.”

Holland also expressed her happiness about Hilliard’s next posting.

“And so with great performance and proven potential comes great reward,” she said. “The Hilliards are getting that dream assignment in Italy. Not only is it a great location for him and his family personally, but Europe is where our best are needed right now.”

As the outgoing commander, Hilliard spoke after Holland. He took time to show his appreciation for the large workforce under his command at the District.

“It’s an old Army idiom, that ‘Great units do routine things routinely. And then the exceptional comes naturally,’” he said. “And so I would say the exceptional does come naturally to the Vicksburg District. I’ll tell you, over the last three years, over 1,200 employees have come through tremendous events like the flooding of 2019 and the global pandemic of 2020.”

Hilliard also addressed his two children who were in the audience.

“I thank you for what you’ve had to deal with and put up with over the years,” he said. “I would tell you that you are both amazing, amazing people with wonderful talents and most of all with kind hearts. And I’m so proud of you both more than you could ever know.”

According to a press release from the Vicksburg District, Klein comes to Vicksburg from Springfield, Va., where he graduated from the Eisenhower School for National Security and Resource Strategy. Previously he served as the military assistant to the Chief Management Officer of the Department of Defense.

He served two tours in Iraq supporting Operation Iraqi Freedom and one tour as Aide-de-Camp to the Chief, Office of Security Cooperation, U.S. Embassy, Baghdad.

Klein spoke about his eagerness to be filling the new position.

“To the Vicksburg District and our community partners: I look forward to learning from you and working with you to keep making these big things happen, and solving these big, juicy problems,” Klein said. “And (I want to) ensure that we remain a reliable partner and the best place to work. So let’s get this adventure going.”