Night or day, Evan Hallford blew all of his competition away.

Hallford also won the Canton Juneteenth 5K on Saturday morning, giving him a pair of first-place trophies at the end of a long and grueling day. Temperatures were near 90 degrees at the start of both races that began 12 hours apart.

“I wanted to win it last year and I didn’t get it and was like, ‘I’m going this year and I’m going to win it.’ And I just did it,” Hallford said.

Hallford was second in the 2021 Night Run behind two-time winner Andrew Klock. Klock did not compete this time, and none of the other 93 runners came close to challenging Hallford despite maintaining a very fast pace.

Five runners finished with times of 20 minutes or better, led by Hallford and runner-up J.T. Price of Clinton. Price had a time of 18:46, more than 100 seconds behind Hallford. 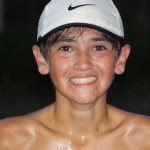 Vicksburg’s Matthew Brewer was third in 18:53, and Christian Parks of Clinton (19:22) and Jacob Rix of Leland (19:53) rounded out the top five. All of the top five finishers were 17 years old or younger.

Hallford’s fastest competition was the police motorcycle officer who accompanied him for most of the race.

“God was with me the whole me. One guy was going with me and I was like, ‘I’ve got to go,’ and I just went for it,” Hallford said. “The police were pushing me all the way through, talking to me and encouraging me. They helped me the whole way.”

Vicksburg resident Laura Jimenez was sixth overall, in 20:20, and won the women’s championship for the second year in a row. Her time was 2 minutes and 25 seconds faster than last year.

“I feel important,” Jimenez said with a laugh. “I feel awesome winning a race. This is the second time in my life I won a race.”

Like Hallford, Jimenez was not seriously challenged in the women’s division. Vicksburg’s Kelsey Fall was the women’s runner up in 23:25, and placed 13th overall. 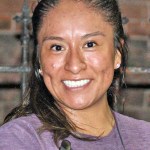 “At the beginning I set a little (faster) pace, and then I tried to keep the pace with the first group. Then they ran fast,” Jimenez laughed. “They were very good competition.”

In the 5K race walk, training partners Steve Pranger and Lucy Priddy took home the top prizes.
Pranger was first overall, with a time of 34:06, while Priddy was third overall and claimed her second consecutive women’s Night Run championship with a time of 35:47.

Another of their training partners, Andrew McCaskill, was fourth with a time of 36:20.

“I really wanted to win today,” Priddy said. “Last year my mother was really sick and I left the hospital because she wanted me to do this race, and I won it, and she passed away shortly thereafter. I know she was so proud of me to win it again.”

In between Pranger and Priddy was Ron Roma. The Vicksburg resident — and 2021 Night Run champion — was even with Pranger for the first two-thirds of the race, then faded just enough in the final mile to allow Pranger to pull ahead.

The final margin of victory was 15 seconds, close enough that Pranger was able to glance over his shoulder and see Roma coming as they made the final turn from Cherry Street onto Crawford Street for the last 50 meters of the race.

Pranger, one of the top racewalkers in Mississippi, won the Star Spangled Night Run for the fourth time in its five-year history.

“Ron and I were neck and neck for the first two miles, basically,” Pranger said. “Once I hit the hill coming up Chambers, that’s where I left him.”