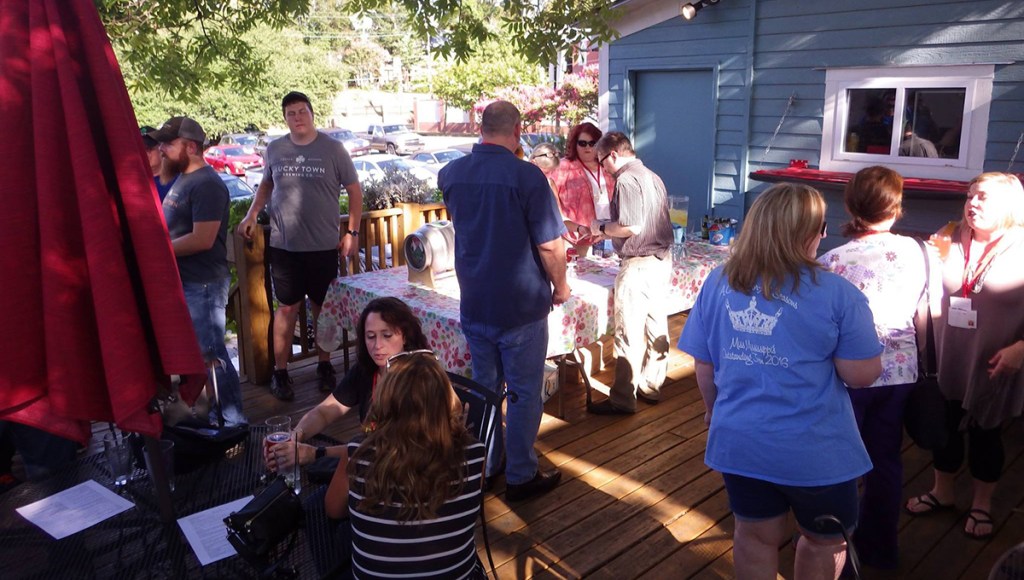 Local foodies gather at Martin's at Midtown for a community gathering. (Photo by John Martin)

Martin’s at Midtown has been a part of the Vicksburg culinary scene since 2009 when it was opened by John and Lisa Martin.

They had to adapt to changing circumstances during the COVID-19 pandemic, but they are still offering delicious, unique and often educational dishes to their customers.

Thirteen years ago, they owned a building in which they installed a commercial kitchen. In the front of the building, Lisa ran an educational supplies store. The back was being rented out and used as a sandwich shop. The small restaurant lasted less than half a year.

“We kind of put our heads together and said, ‘You know, if they had done this, and this and this, they probably would have lasted longer,’” John said. “So we tried some of those things, and I guess we lasted a little longer than that.”

They were consistently open for business four days a week. Then COVID hit.

In March 2020, the Martins were dealing with the same problems facing businesses throughout the world.

“Like most restaurants, we went to take-out only,” John said. “It didn’t really work for us.”

About six months in, the restaurant essentially closed down to weather the storm. Unfortunately, COVID did not blow over.

Martin’s has always had dedicated regulars, but at this point, they began to really embrace community as a business model.

“We had this one group that’s been in existence since almost the time we started the restaurant,” John said.

The Martins had been hosting monthly wine tasting sessions that had a core group of about 20 customers. It usually included a presentation by John about wine tasting and culinary traditions.

They decided to try to adapt the event into a streaming format over Zoom calls on Thursdays. The streaming wine tastings proved to be successful, so the Martins decided to try other Thursday events. Since then, with a few exceptions, they have been holding weekly events.

For instance, every second Thursday of the month, they host a slow-cooker event. Customers pick up prepared ingredients on Wednesday along with a paired wine.

“It’s a great big happy hour on Wednesday afternoon when they pick up (the ingredients),” Lisa said.

The next day, customers prepare the meal at home and the Zoom session starts at 6 p.m.

The Martins also host in-person events at least once a month. Customers on the email list for the restaurant are invited to a free private event (and many of these customers overlap with the wine tasting group).

Sometimes it happens at the restaurant, sometimes at a friend’s house. Attendees all bring food and drink to share.

John and Lisa have embraced the opportunity that a once-a-week schedule presents. They have always been adventurous foodies, but now that they don’t have to worry about being stocked and prepared for a set menu, they can focus on more eclectic and experimental dishes.

In about three weeks, they will be preparing vindaloo, an Indian-Portuguese curry dish, paired with a white Portuguese blend wine.

John explained that Portuguese sailors would preserve meat in casks of wine during long voyages to India. During the journey, the wine would ferment, creating vinegar, which was then combined with the preserved meats and other spices and ingredients from Goa, India. Thus, vindaloo was born.

“We’ve really become very good patrons of the ethnic grocery stores in Jackson,” Lisa said, adding that they go to Patel Brothers for Indian ingredients, Alladin’s for Mediterranean food and Mr. Chen’s for Asian dishes, to name a few.

Bill Justice has been a regular at Martin’s for about seven years. He said he appreciates the unique ingredients and research that goes into their cooking.

“They come up with a whole bunch of flavors that they put together that are really, really good,” he said.

At one of their events, the Martins made Japanese milk bread.

“That was probably the best bread we ever put out,” John said.

Everyone got a full loaf. Being too much for a single meal, the wine tasting group held a contest to see who could make the best grilled-cheese sandwich out of the leftovers. Everyone would report their results while trying different cheeses and methods of grilling.

While many of the dishes they prepare contain meat, Lisa said that there is always a vegetarian option.

John said that he and Lisa strive to make their business a ‘third place.’

“You have work and home. And then you have this other place where you feel like you’re among friends and family,” he said. “We wanted to create a third place where people could connect.”

This Thursday, July 7, Martin’s at Midtown will be hosting an in-person meal at the restaurant at 5:30 p.m. Customers will be given a flight of barbecue sauces from different regions to try with the main dish. Reservations for the event are not required.

For more information about upcoming events, you can go to the restaurant’s Facebook page at facebook.com/martinsatmidtown.