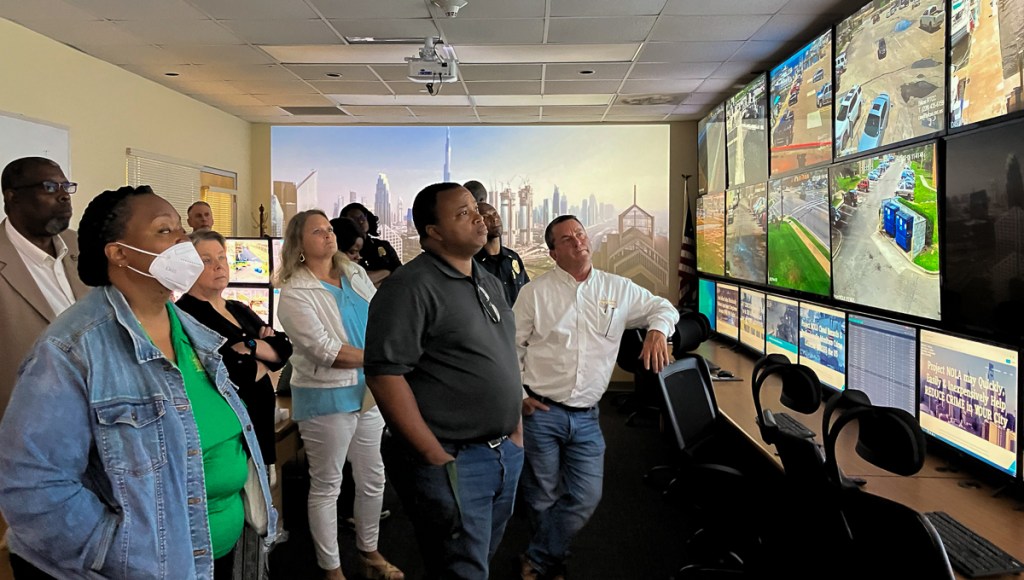 City officials were shown a monitoring room to demonstrate the capabilities of the Project NOLA cameras and how they can be used by law enforcement on Wednesday at New Orleans University. (Photo by Ben Martin | The Vicksburg Post)

The Board of Mayor and Aldermen of the City of Vicksburg voted 3-0 on Friday to pursue a contract for a new camera surveillance system to aid law enforcement.

The system is designed and operated by the non-profit group Project New Orleans.

Vicksburg Mayor George Flaggs Jr. said he is a proponent of the camera system.

“It gives us more preventative measures out there in neighborhoods that have high volumes of 911 calls,” he said. “This is a more sophisticated level of protection. It’s using technology to its fullest.”

A group of Vicksburg officials visited the Project New Orleans Real-Time Crime Center on Wednesday at the University of New Orleans. The group included Flaggs, Police Chief Penny Jones, North Ward Alderman Michael Mayfield, and South Ward Alderman Alex Monsour, among others. The purpose of the trip was to gain information about the surveillance camera system that the city is now adopting.

The goal of Project NOLA is to develop and implement cost-subsidized high-definition cameras, gunshot detectors and license plate recognition cameras in needed areas.

Officials were given a presentation by Bryan Lagarde, Criminologist and Executive Director of Project NOLA. Lagarde said one thing that sets the organization apart from other camera surveillance programs is the price.

Lagarde said that the high upfront and maintenance costs of other camera systems prohibit their usefulness.

“As a result (of those high costs), the cameras very often go on poles in major intersections. They capture mainly traffic accidents, things like that,” he said.

Those cameras end up missing more serious crimes in areas with less traffic.

Chief Jones vocalized her support for the camera system at the board meeting on Friday.

“I feel like the NOLA Camera System is what Vicksburg needs right now. We’ve experienced so many things, so many different crimes but they’re just not isolated to one particular area; they’re happening everywhere,” she said. “I think it’s something good we need for the city of Vicksburg to help us in solving a lot of these crimes.”

Aldermen Mayfield and Monsour echoed the sentiment at the board meeting.

According to Project NOLA, the average cost of each camera from the organization is only $150. Average installation costs $150, and the annual operating costs of the cameras are an average of $180 per year. Part of the cost is determined by the needs of the area.

Lagarde added that the lower costs aren’t the only advantage of choosing their cameras over other private companies’ options. He said the technology is more advanced as well.

After a presentation about Project NOLA, city officials were brought into a monitoring area, a space about the size of a living room with an array of TV screens covering one of the walls.

There, Lagarde demonstrated the power of the cameras. One of the screens showed a prerecorded video of some raccoons rummaging through a dumpster at night. The scene was sharply rendered. Lagarde then started to zoom out, revealing that the camera was mounted across the parking lot a, couple hundred feet away.

The video and data collected are stored on servers at Project NOLA for two weeks, where it is readily available to law enforcement. Many law enforcement agencies that use the system also create their own monitoring stations like the one where the demonstration took place. Flaggs said he hopes to have a similar monitoring room made for VPD.

The software used by the cameras contains many automated systems for facial recognition and license plate recording. Tags are then automatically applied to vehicles and individuals. So a law enforcement officer can, for instance, search the records for a man in shorts with a red shirt or a particular license plate, and then be presented with corresponding video footage as opposed to sifting through hours of video recordings.

Lagarde also said their facial recognition is superior to other systems.

“Traditional facial recognition is biased against African-Americans because a lot of cameras have problems with contrast,” he said. “They just see dark skin. Our cameras, especially in infrared (mode), are literally able to see regardless of complexion and the time of day.”

Project NOLA cameras are able to sense infrared light as well as visible light. At night, each camera provides its own light source in the form of an infrared beam, invisible to the human eye. This allows the cameras to pick up images that would otherwise be unusable.

Lagarde said the organization got its start after Hurricane Katrina. New Orleans was facing, among many other problems, a shortage of available police officers. “We had to do something that worked as a very good force multiplier, where the cameras would go ahead and enhance (the capabilities of) the few police officers that we had left until we could grow the numbers back up.

Currently, there are over 5,000 Project NOLA cameras in the city of New Orleans. However, the city only has to pay for 500 of those cameras.

After the initial vote on Friday, Flaggs said he is ready to work on the next step to get the cameras installed in Vicksburg.

“The second phase would be to put together a team of people to determine how many locations we need and to determine the locations (where) we need to put them,” he said. “And I suggest we put them into (areas with) high volume calls of 911 and in areas of subdivisions where we know that there’s one way in and one way out.”

The City of Natchez adopted the camera system in 2018. According to the Project NOLA website, “Natchez PD Chief Armstrong credited Project NOLA for a city-wide 92% reduction in homicides and a huge reduction in 911 calls for service in historically high-crime areas.”