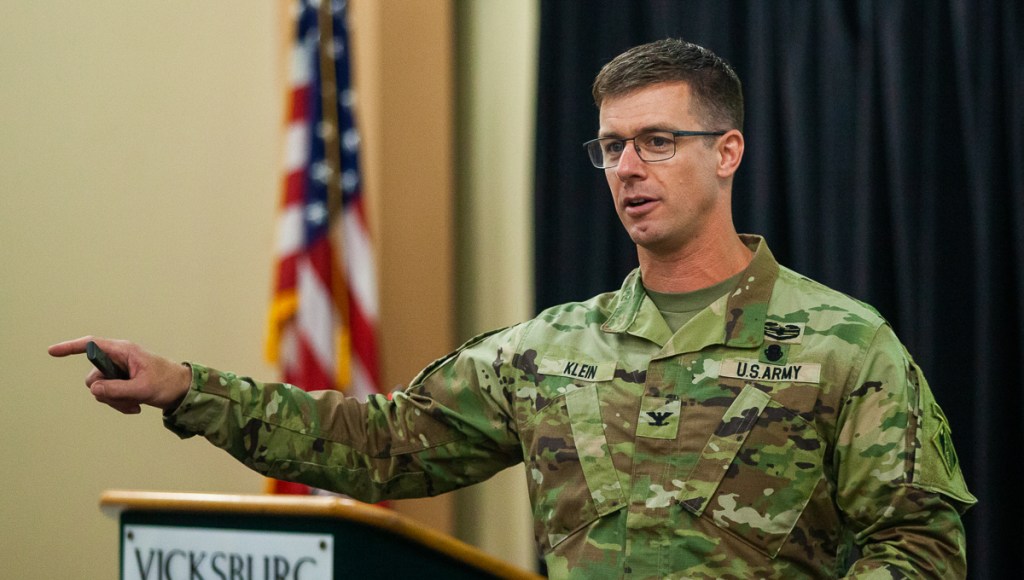 Col. Christopher Klein, Commander of the Vicksburg District of the Army Corps of Engineers, spoke about the District’s mission and its impact on local communities. (Photo by Ben Martin | The Vicksburg Post)

The Vicksburg-Warren Chamber of Commerce held its monthly meeting on Wednesday when members of the chamber and other community members attended the event, held at the Vicksburg Convention Center, to hear the guest speaker, Col. Christopher Klein.

Klein’s military career includes two tours in Iraq during Operation Iraqi Freedom and a tour as Aide-de-Camp to the Chief Office of Security Operations at the U.S. Embassy in Baghdad. He recently graduated from the Eisenhower School for National Security and Resource Strategy in Virginia. He also has a bachelor of science in civil engineering from the U.S. Military Academy and a master’s degree in geological engineering from the University of Missouri.

Klein spoke about a variety of topics concerning the District’s mission and its place in the local community.

“The Mississippi River and all of its tributaries are absolutely critical in connecting rural communities… to get commerce out to the world,” he said.

The Vicksburg District is in charge of civil engineering projects in about 68,000 square miles across Mississippi, Arkansas and Louisiana.

“This is the lifeblood of our economy right here, this river,” he said.

A major component of the District’s mission is the maintenance and management of the inland waterways in that region, including about 460 miles of mainline Mississippi River levees stretching from Memphis, Tennessee to the southwest tip of the Mississippi state border. About 1,200 people are employed by the District.

Klein also highlighted economic benefits to the communities in the District’s jurisdiction.

“Our budget is $175 million a year to run the operation,” he said. “That results in $1 billion of economic development and injection into these communities.”

He touched on education as well, encouraging the Vicksburg-Warren School District to implement the Purple Star program, run by the Military Child Education Coalition. The program awards a designation to schools that have assigned school staff to help children of military families transition to their new environment when moving to a new school.

Klein said that it is an important factor when recruiting officers to work in the District.

“I want this designation for Warren County schools,” he said. “Military families look for this purple star when they’re moving. And if this purple star is on your Board of Education website, that catches our eye, and it kind of tells us where to live.”

During a question-and-answer session, one of the attendees asked Klein about the need to finish the Yazoo Backwater Area Pump Project.

Klein said that while currently the decision is not up to him, he is eager to see the project’s completion.

“The Vicksburg District is ready to do it. Once we have the authorization, the vetos lift and we got the money, we are ready to go,” he said. “We live here. We want to see it done as much as everybody else.”

District Commanders are typically in the position for several years before transferring to other assignments.

“I look forward to working with you in this community, at least for the next three years,” Klein said.