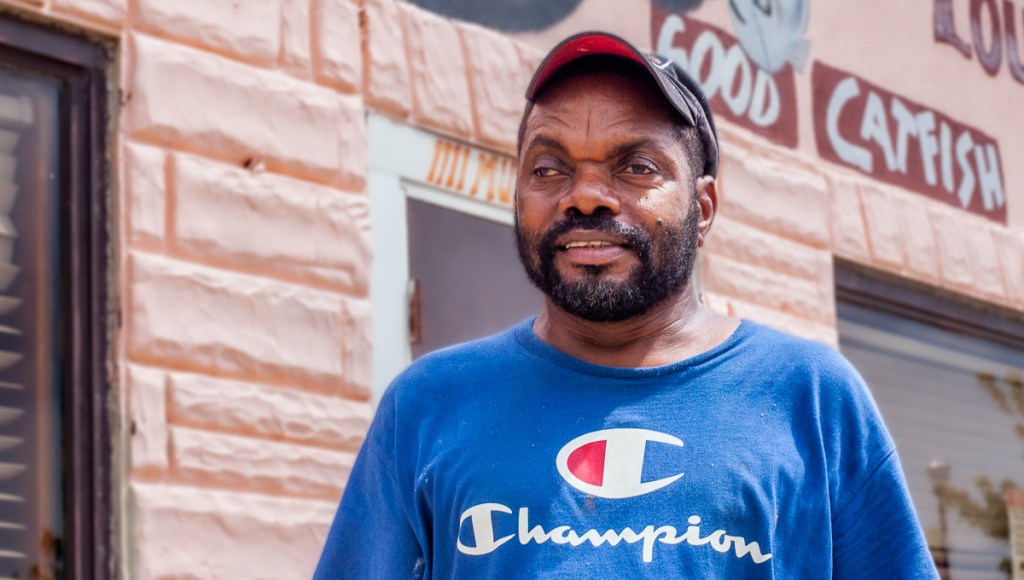 James Anderson saved the life of Johnny Stanfield on Aug. 7 after he found Stanfield unresponsive in his parked car from a diabetic coma. (Photo by Ben Martin | The Vicksburg Post)

A Vicksburg couple is hailing their “guardian angel” following a dire situation that could’ve been far worse.

Vicksburg resident James Anderson was going about his daily routine on Sunday, Aug. 7, walking down Washington Street past the Vicksburg Event and Business Center where he sometimes works as a handyman for the owners, Dr. Deborah and Johnny Stanfield.

“I’ve known James for many years,” Deborah said. “He comes by and helps me out here at the building, taking out the trash and doing a lot of the handiwork. He has such a kind heart.”

While going to Speedmart across the street, Anderson noticed Johnny in his vehicle parked outside the Event Center building and went along his way. A few hours after he got home, Anderson said he felt something wasn’t right. He went to check to see if Johnny’s vehicle was still there. It was.

Johnny, a military veteran, had gone into a diabetic coma, according to Deborah.

“I had to help him as best I can,” Anderson said.

Several vehicles drove by without stopping. Eventually, he was able to flag down a Vicksburg Police Department patrol unit, which was able to call for an ambulance.

Johnny was transported to the Merit Health River Region Hospital. From there, he was airlifted to the University of Mississippi Medical Center in Jackson. He is still recovering, but Deborah said he is making progress.

“There, they put him on a ventilator, and they’ve been trying to wean him off the ventilator and the medication,” Deborah said. “So he’s not really back to himself 100 percent, but he’s getting there.”

“I didn’t know at that time that James was the one that found him. I found out later,” she said. “When I found out I just cried because I was just so overwhelmed. But I was so thankful.”

She added that she believes Anderson stopped to help that day because he cares about people.

“I just wanted to hug him and thank him so much,” she said. “It didn’t surprise me that he did it, because that’s who he is. … He has a big heart. We were just so thankful that he came by. Because if he hadn’t come back, the outcome would have been different.”