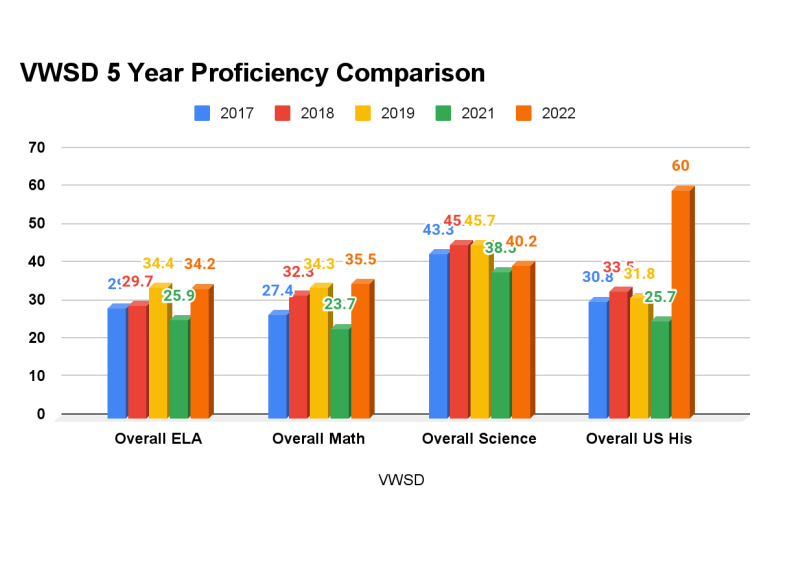 Students in the Vicksburg Warren School District — and Mississippi as a whole — showed a significant increase in proficiency levels for the 2021-22 school year, according to statewide assessment results released by the Mississippi Department of Education.

Most notable in the score report for VWSD is a steep increase in proficiency in U.S. History. A new U.S. History assessment first administered in the 2020-21 school year saw a district score rise from 25.7 percent to 60.0 percent, while state scores went from 47.4 to 69.3 percent.

MDE attributed at least some of the change to pandemic-related difficulties encountered in the 2020-21 school year.

Dr. Gwen Reiber, Director of Accountability, Assessments and Student Information for Vicksburg Warren School District, said she was pleased with the results from local students.

English language arts and mathematics scores for the district were about the same as district scores from 2018-2019, while Science was 45.7 percent in that year and 40.2 percent in the most recent scores. U.S. History scores nearly doubled during that time.

“This took tremendous effort from our students, parents, teachers, principals and curriculum team,” Reiber added. “I am very proud of our entire team and the hard work they did to achieve these positive results. I am also thankful for my team at central office for their efforts in tracking and analyzing the data.”

The Mississippi Academic Assessment Program assesses students in a range of subject areas including English language arts and mathematics in grades three through eight; science in grades five and eight; and English II, algebra I, biology and U.S. history in high school.

While the statewide assessments were not performed for the 2019-20 school year due to disruptions caused by the COVID pandemic, assessments for the 2020-21 school year showed significant drops in proficiency in schools across the state.

These most recent results show a return to pre-pandemic levels of performance. For instance, proficiency in mathematics statewide was reported to be 47.4 percent for the 2018-19 school year. The assessment for 2020-21 showed that the number dropped to 35.1 percent. The 2021-22 school year showed a proficiency level in mathematics of 47.3 percent.

State Board of Education Chair Rosemary Aultman expressed her appreciation for the work being done in Mississippi’s public schools.

“I hope that superintendents, principals and teachers… will take full knowledge of how proud we are of the work they are doing,” Aultman said in a statement.

The Mississippi Department of Education stated that the percentage of students scoring proficient or advanced in the most recent scores reached an all-time high of 42.2 percent in English language arts and 55.9 percent in science.

On the release of the results, Mississippi Governor Tate Reeves stated, “Mississippi education performance has once again reached new record highs. While states in other parts of the country kept their students out of the classroom, Mississippi committed to in-person instruction. These results speak loud and clear as to which approach was best for kids.

“In Mississippi, we still believe in rewarding success,” Reeves added. “Today’s results are yet more proof of how well deserved the historic teacher pay raise was that went into effect last month.”

The pay raise was the result of a bill passed by the state legislature in March, which implemented a statewide average pay increase for Mississippi educators of $5,140 per year.

School district accountability grades, which rate schools and school districts on a scale of A to F, are heavily influenced by the proficiency scores. Those grades will be released at the Mississippi State Board of Education meeting on Sept. 29.

Comprehensive results of the assessment can be found on the Mississippi Department of Education’s website: mdek12.org.