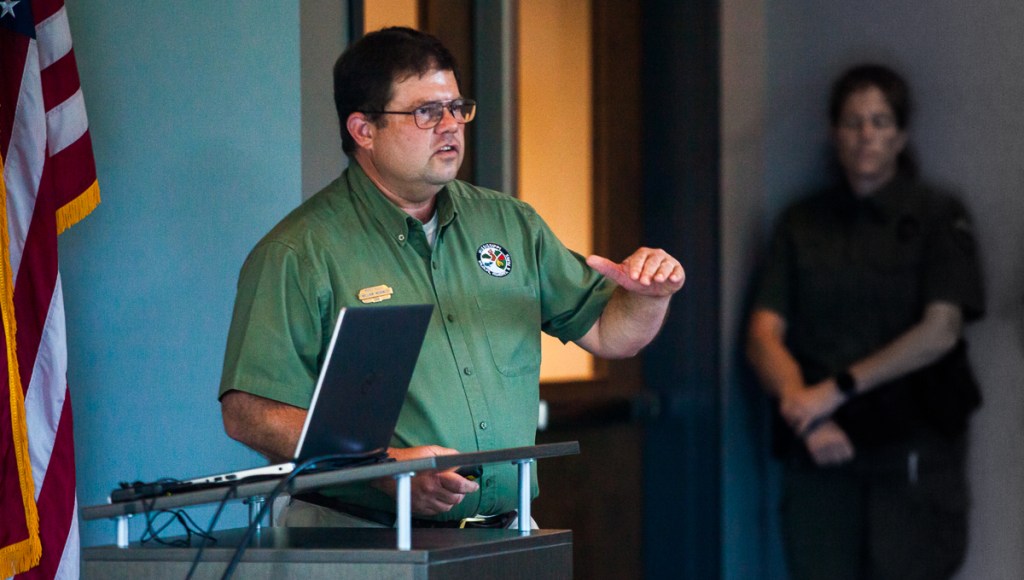 William McKinley, Deer Program Coordinator for the Mississippi Department of Wildlife, Fisheries, and Parks, explained the effects and spread of chronic wasting disease and what the Department is doing to address it. He asked for help from hunters across the state to participate in a program that tests killed deer to help monitor and understand the spread of the disease. (photo by Ben Martin | The Vicksburg Post)

The Mississippi Department of Wildlife, Fisheries, and Parks (MDWFP) held a public presentation on Chronic Wasting Disease (CWD) and its presence in Warren County on Monday. Held at the Hinds Community College Vicksburg Campus, Hunters and other concerned citizens gathered to learn about and discuss the disease and management practices.

Russ Walsh, Wildlife Executive Staff Officer for MDWFP gave the introduction to the meeting, saying that the purpose of the meeting was to make sure the Department and the public were on the same page on the state’s efforts to control the disease.

CWD was first discovered in Warren County in 2018, before spreading to adjacent counties. “It’s kind of a ground zero here,” Walsh said.

The presentation was given by William McKinley, Deer Program Coordinator for MDWFP. He is a biologist and has been in the deer program in the Department for the past 19 years.  “CWD, as I’ve said many times, it’s one of those things we were looking for and hoped we never found. But we did find it,” he said. “We hoped it would go away, and it hasn’t gone away. In fact, it had been spreading during that whole time since we found those back in 2018.”

The disease, like mad cow disease, is a prion, a misfolded protein in an organism’s tissue that can transmit its deformation to other proteins. The spread of the misfolded proteins in the brain and nervous system cause brain damage and decreased motor function. The disease is always fatal.

It is also usually not possible to tell if a deer has CWD by its appearance or behavior, as they carry and spread the disease before showing any symptoms. “They become very immobile in that later stage (of the disease). When they begin to go into the wasting phase, they lose their sight, they lose their sense of smell.”

McKinley made the presentation in front of a slideshow of graphs, photos, and statistics.

“Of the 51 positives this past season, the only one that looked sick was that,” he said while pointing at a photo of an emaciated deer carcass among photos of other healthy-looking deer that tested positive.

Compared to bacteria and viruses, prions are simpler in structure and extremely resistant to heat. “(The prions) are very hard to get rid of,” McKinley said. “They can withstand incredibly high temperatures. It takes heating it to 1,832 degrees to turn it so that it is neutral.”

Unlike mad cow disease, however, CWD is more easily transmitted between deer, according to McKinley. “Mad Cow couldn’t transfer from cow to cow, as they were getting (it) from eating infected feed,” he said. “CWD can go from deer to deer. And we know that the prions (in CWD) are present in saliva, urine, feces, and mucus.”

McKinley added that in many of the areas affected in Mississippi, the disease has reached a prevalence of 50 to 60 percent within herds. “When it reaches about 5% prevalence, it starts to rise exponentially,” he said.

He explained that the ease of infection is the main reason the State of Mississippi has created supplemental feeding bans in and around areas where CWD-positive deer have been found. These areas are referred to as CWD Management Zones. Those zones, which are defined by county borders, include Warren and neighboring Issaquena and Claiborne Counties. 11 counties near the northern border of the state are also classified as such.

The ban prohibits feeders, salt licks, and mineral licks that attract deer in large groups where they make contact with each other and can transmit the disease through body fluids, i.e. touching noses when a group congregates at a pile of corn.

The state also placed a ban on transporting deer carcasses from CWD Management Zones into non-CWD management zones; exceptions include cut and wrapped meat, finished taxidermy, and skulls and skull plates cleaned of any brain tissue.

An important aspect of the meeting was educating the public about the CWD testing program run by MDWFP. The program relies on hunter-harvested deer to track and monitor the spread of CWD.

MSWFD is asking hunters to send the heads of deer they kill to the Department via drop-off locations around the state. The locations all have a large chest freezer where the hunter can leave the head in a provided bag with a tag. The hunter would then fill out a brief form with information such as the location and date of the kill. The head is then picked up and transported to a lab for testing.

“Take what you learn tonight on this disease and go tell other folks about it. We need hunters’ help. Because the disease wins if y’all don’t help. It’s that simple,” McKinley said. “Hunters are the key to CWD management.”

To learn more about the testing program and the locations of drop-off locations, as well as restrictions and policies concerning CWD management areas, visit https://www.mdwfp.com/wildlife-hunting/chronic-wasting-disease.