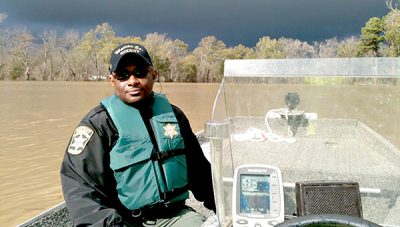 Colleagues of Lieutenant Sam Winchester, of the Warren County Sheriff’s Office, shared fond memories of him after he passed away this week after battling cancer.

Lieutenant Stacy Rollison of the Sheriff’s Office worked with Winchester for her entire career, and both were promoted to the rank of Lieutenant at the same time.

“I think the most important thing about Sam is that he was 100 percent a family man. He was so proud of his family, his wife, his daughter, and his son. He absolutely was probably one of the best men I’ve ever met in my life,” she said. “When I became an investigator, he welcomed me. He trained me. I started on shift with him on patrol. He was quick to give me all the knowledge that he had, share that knowledge with me and share it with any officer that wanted to learn.”

Rollison was the first certified law enforcement officer in Warren County. “He always treated me as an equal. I never felt inferior,” she said. “He treated me like family, and I did that as well with him. His loss will never be filled, that’s for sure.”

“Sam was absolutely the epitome of a professional,” she said. “He treated everyone equally. His uniform was always on point. If you needed help, he would be the first one to offer a hand.”

One of the many duties Winchester had during his career in law enforcement was Fire Investigator for the Sheriff’s Office. Warren County Fire Coordinator Jerry Briggs said he often worked with Winchester and that the two were close friends.

“You know, probably the closest thing I’ve got to an actual brother was Sam Winchester,” Briggs said. “I guess the one thing to sum him up (is that he was) just a good human, and mentor, and father,” Briggs said. “If you look up the word ‘professional’, you should see a picture of Sam. He dressed the part, he was always clean and crisp. I picked on him because he probably had 100 pairs of shoes. Because he was gonna match.”

“We lost a good guy,” he added, “They don’t make very many Sam Winchesters.”

Sheriff Martin Pace said that Winchester was a dedicated member of the Sheriff’s Office for over 20 years, during which time he wore many hats. Many of his roles involved teaching others.

“Sam started out as a uniformed patrol officer, and was soon promoted to Detective,” Pace said. “He was also my lead boat operator, a certified boating safety instructor, and he was a hunting education instructor. He was also an emergency vehicle driving instructor not only for the Sheriff’s Office, but for the Mississippi Law Enforcement Officers Training Academy in Pearl.”

Before entering law enforcement, Winchester served in the U.S. Army reserve for 14 years, during which he drove fuel trucks in Iraq. He also held a master’s degree in education from Alcorn State University, and was a graduate of both the Mississippi Law Enforcement Officers Academy and the State Fire Academy.

“Sam’s dedicated professionalism and his friendship will be missed by all that knew him and had the privilege to work alongside him,” Pace added. “We ask that the public keep his family in their prayers.”

Winchester is survived by his wife, Dendria, and two children, Keidria and Sam Jr. Services will be held on September 10 at noon at the Vicksburg City Auditorium.