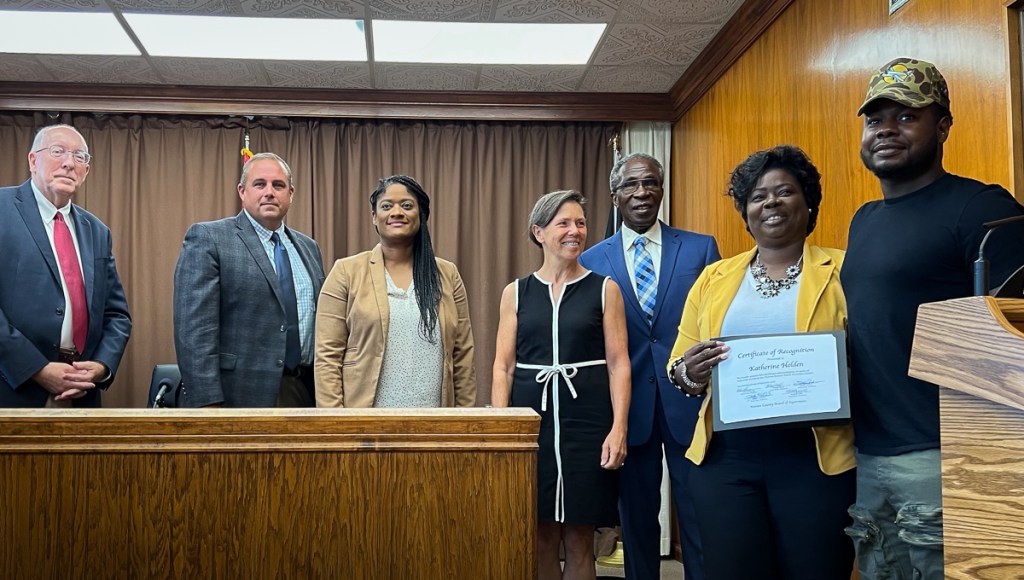 “For as long as she’s been at the youth court, Kathy knows it’s a 24/7 job,” Southerland said. “These kids come in at the worst point of their lives, and they walk out with their heads held high, because of her.”

Holden started working in law enforcement when she became a part-time jailer for Warren County in April 1993. She began working in the Juvenile Detention Center in April of 1997, shortly after the facility was built, and has been there ever since.

“It felt overwhelming, surreal. It was also bittersweet,” Holden said of the honor.

Last year on Sept. 20, Holden’s mother, Ida Holden Russell, passed away. In the following month, she also lost her grandmother, Ida Holden. Marking this milestone on the one-year anniversary of such a deep personal loss is something Holden said was especially significant.

“Those two ladies both instilled my work ethic and everything that I have, in me. So this is in honor of them because I know how proud they are and were of me. So I’m overjoyed.”

Holden said being recognized for her work was very meaningful to her.

“That was a good feeling to see and have their support along with the Board of Supervisors. It is a great thing that they even recognize employees for longevity; a lot of jobs don’t do that,” Holden said. “That’s a good thing when you do recognize it because what it does is it makes you want to work even harder and pour into your profession even harder, because you know someone out there appreciates it. Today was a great day.”

Holden has remained dedicated to finding ways to positively impact the lives of children who end up in the Detention Center. About five years ago, Holden began a program at the Center called ‘Hour of Power.’ Every Tuesday night, She has a positive role model come and speak with the children in her care.

“My door is open to anyone who feels that they can come in and help us change the mindset of our youth today,” Holden said. “If you meet the confidentiality of criteria, if you meet the background check, and so forth. Come and pour into these kids. Our kids need mentors now more than anything. That’s the most important thing that we need for these children. We need mentors. (A lot) of them don’t have their parents’ support.”

Holden wished to thank her two sons, Levy Wyatt Jr. and Bobby D. Twilley, for their support. Twilley, recently promoted to Staff Sergeant in the United States Army, was able to attend the board meeting to see his mother recognized for her work. Holden said she also wanted to thank Vicksburg Mayor George Flaggs, her supervisor, Youth Court Administrator Rachel Hardy, as well as Judge Gerald Hosemann, Judge John Price and Southerland as well as her staff, whom she described as “dedicated and awesome.”

Holden said that over her 25 years at the Juvenile Detention Center, her objective has stayed the same.

“My ultimate goal is to see less kids come in and more kids turn their lives around,” she said.

Those interested in volunteering for the Hour of Power or in other programs at the facility can contact Holden at the Juvenile Detention Center at 601-630-8003.