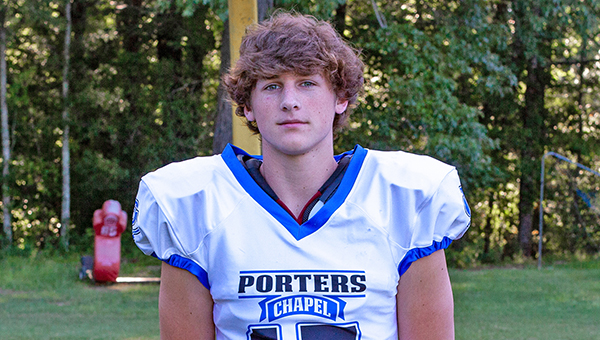 Porter's Chapel Academy's Thomas Azlin caught three passes for 56 yards and a touchdown, and also had a team-high eight tackles on defense in a 36-32 loss to Wilkinson County Christian on Friday.

The Eagles scored three touchdowns in the fourth quarter to erase most of a 16-point deficit, and got a turnover with less than two minutes left for a chance at a fourth. They couldn’t get down the field, though, and lost 36-32 to Wilkinson County Christian Academy on Friday.

“I’m extremely proud of our effort. We didn’t allow things to spiral on us. We just came up a few plays short,” PCA coach Blake Purvis said.

John Wyatt Massey passed for 158 yards and four touchdowns for PCA (3-2), and also ran for 60 yards and a touchdown. Zach Ashley caught two touchdown passes, while Ty Mack and Thomas Azlin had one each. Azlin also had eight total tackles.

Ryan Fisher had 191 total yards — 119 rushing and 72 receiving — and three touchdowns for WCCA (3-3), including two in the first three minutes of the game. The early scores had PCA playing from behind the whole game.

“We were three starters down,” Purvis said, referring to injuries that kept starters Jase Jung, Taylor Labarre and Noah Porter from suiting up. “We got out to a slow start and then we realized we were fine, settled in and made some plays.”

A lot of those plays came in the fourth quarter, after WCCA had taken a 30-14 lead.

Massey threw a 55-yard touchdown pass to Ashley, and then the Eagles recovered an onside kick and scored again on a 3-yard run by Massey. The two touchdowns cut the deficit from 16 points to four — both two-point conversions were no good — in the span of 36 seconds.

Fisher caught a 9-yard touchdown pass to put WCCA ahead 36-26 with 2:46 to go, but the Eagles weren’t through. They hit a big pass down the field and scored on another 6-yard pass from Massey to Mack to cut it to 36-32, then recovered a fumble near midfield on WCCA’s next offensive snap.

The miracles ended there, however. Massey threw four straight incompletions to turn it over on downs, and WCCA was able to run out the clock.

“They played a prevent defense and we couldn’t get anything down the field or underneath,” Purvis said of PCA’s final series.

The loss snapped a two-game winning streak for the Eagles, but they have plenty left to play for. They’ll host Prairie View next week in the first of just two MAIS District 3-2A games. Win that one, and the season finale at Tallulah on Oct. 21, and they’re still district champions.

“I told our guys tonight that our season starts next week,” Purvis said. “If we take care of business we’re a top-three seed.”