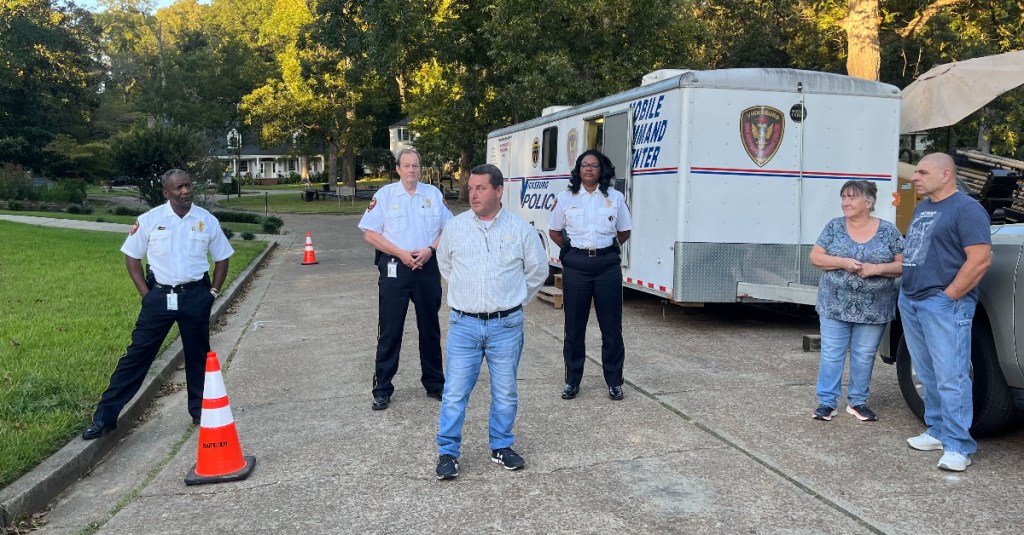 The Vicksburg Police Department visited the Glenwood Circle neighborhood Wednesday evening to talk to residents about a new high-tech video camera system that is being installed in the city of Vicksburg.

The cameras, operated by the non-profit group Project New Orleans, will be installed at locations across the city under a program called “Operation Safe Vicksburg.” VPD told Glenwood Circle residents that even though their neighborhood had not been selected as a site for the city-funded cameras, residents could come together to fund the cameras if they have a desire to increase security in the area.

“The camera would almost be like your police officer in your neighborhood,” VPD Police Chief Penny Jones said as she addressed residents about the camera system.

Jones said The Wildwood neighborhood association had purchased the Project NOLA camera system about a year ago and could be contacted if Glenwood Circle residents had additional questions.

VPD plans to hold future outreach sessions and said they would be in the Belle Meade neighborhood Thursday evening.

In July, the Vicksburg Board of Mayor and Aldermen approved a resolution to acquire and install the camera system. The city’s total cost of installation has not yet been determined, but a portion of $2.66 million of American Recovery Plan Act funds recently received by the city will cover the costs of the cameras.

According to Project NOLA, the average cost of each camera from the organization is $150. Average installation costs are $150, and the annual operating costs of the cameras are an average of $180 per year. Part of the cost is determined by the needs of the area.

The Project NOLA cameras are able to record video at 32 megapixels. The software used by the cameras contains many automated systems for facial recognition and license plate recording. Tags are then automatically applied to vehicles and individuals. So a law enforcement officer can, for instance, search the records for a man in shorts with a red shirt or a particular license plate, and then be presented with corresponding video footage as opposed to sifting through hours of video recordings.

The video and data collected are stored on servers at Project NOLA for two weeks, where it is readily available to law enforcement. VPD plans to create its own local monitoring station.

According to the resolution, three different types of cameras will be installed in the city:

• Cameras with gunshot detection ability will be installed at 26 locations.

• License plate reader cameras that can get numbers and letters from a license plate will be installed at Washington Street near Ameristar Casino, the North and South parking garages, Fisher Ferry Road at Sports Force Parks on the Mississippi, Clay and Hope Street, all Interstate 20 intersections and the intersection of South Street and Washington Street.

• PTZ cameras will be installed at 24 locations. According to manufacturer PTZ Optics, A PTZ camera is a pan, tilt, and zoom robotic video camera controlled by a remote operator to pan horizontally, tilt vertically and diagonally, and zoom in on a subject to enhance the image quality without digital pixelation.

Ben Martin and John Surratt contributed to this report.