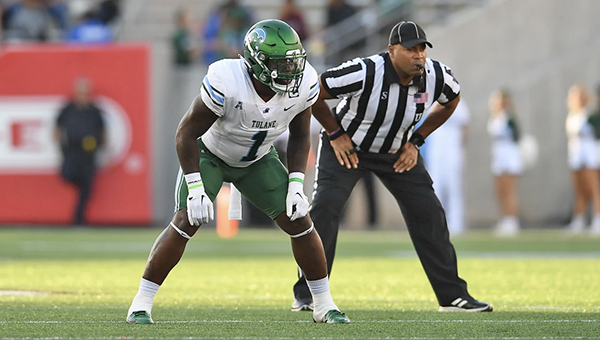 It was a heck of a weekend for Nick Anderson.

The Tulane linebacker and former Vicksburg High star was named a semifinalist for one of the nation’s most prestigious awards and led his team to a huge conference victory. He capped it all off by being named the American Athletic Conference Defensive Player of the Week — again.

Anderson earned the AAC award for the second time in three weeks following his dominant performance in a 27-24 overtime win at Houston on Friday night.

The senior had a team- and career-high 14 tackles and forced a fumble. The fumble was returned 57 yards by Tulane’s Jadon Canday for a touchdown midway through the third quarter.

For the season, Anderson is tied for second on the team with 30 total tackles including 22 solo tackles. He was also named the AAC Player of the Week following the Green Wave’s 17-10 upset of Kansas State on Sept. 17.

Last week, Anderson was named as one of 156 national semifinalists for the William V. Campbell Trophy, which is given to the nation’s top college football player with the best combination of academics, community service, and on-field performance.

Candidates must be a senior or graduate student in their final year of eligibility; have a grade point average of at least 3.2 on a 4.0 scale; and have demonstrated strong leadership and citizenship as well as outstanding football ability.

Anderson graduated in May with a degree in Homeland Security Studies, and is currently a graduate student at Tulane. This is the second year in a row that he has been a semifinalist for the award.

The National Football Foundation will pare the list of semifinalists down to about a dozen finalists on Oct. 26. The Campbell Trophy will be presented Dec. 6 at the NFF’s awards dinner in Las Vegas.