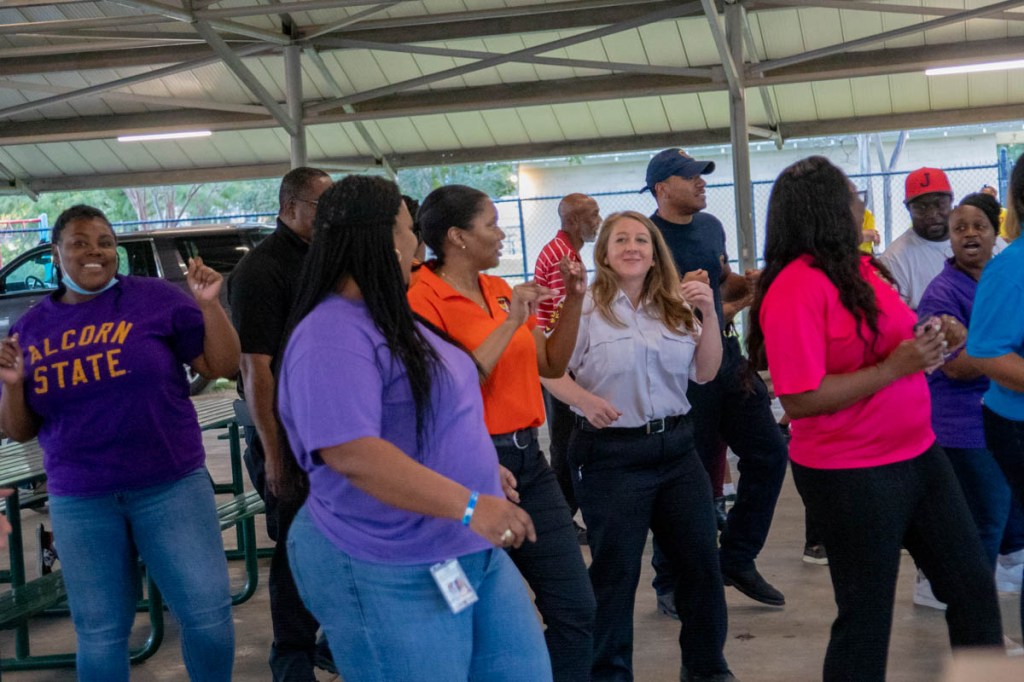 The annual National Night Out event hosted the Vicksburg Police Department is an opportunity for local law enforcement to engage with the community. Attendees, including many officers and firefighters, were seen taking to the dance floor. (Photo by Ben Martin | The Vicksburg Post)

The annual National Night Out event was hosted by Vicksburg Police Department on Tuesday evening.

The nationwide public event is an opportunity for law enforcement to engage with the community by hosting a cookout where families can enjoy music, games and free food.

Around noon that day, Retired Vicksburg Police Sgt. Doug Arp continued his tradition of performing a stunt to raise awareness in the community about the event, which he has done for the past 25 years. Standing on the platform at the end of the ladder of a fire truck, he addressed onlookers.

“This is for National Night Out. The city has a good one down in City Park tonight,” Arp said. “It is a kickoff, and we want to thank the citizens and the officers for everything they have done for us.”

The 74-year-old Arp, along with Warren County Sheriff Martin Pace and Associate Fire Chief Trey Martin, then rode the ladder to its full reach straight up at about 100 feet. In previous years, Arp’s stunts have included spending a week in a dumpster and spending multiple days up on a billboard.

At the event, which started at 5 p.m., members of the police department, the Warren County Sheriff’s Office and the Vicksburg Fire Department were in attendance. Burgers, hot dogs and chicken hot off the grill were on the menu for attendees.

Deputy Police Chief Charlie Hill spoke at the event, touching on the importance of community engagement to law enforcement.

“The first Night Out started in 1984. Sometimes we forget about the importance of this night,” Hill said. “At some point in all of this, we’ve got to keep this community stuff very alive. Because to help us in law enforcement, it’s going to take the community.”

Music at the event was provided by radio DJ The Mailman from Jackson’s 99 Jams station. A bouncy castle for children was on site and cornhole games were popular among the older crowd. At one point, a few dozen attendees, including law enforcement officers and firefighters, took to the dance floor for the “Cupid Shuffle.”

Vicksburg Mayor George Flaggs Jr. also spoke at the event, saying he believes the community is on the right track in terms of reducing crime.

“We believe in Vicksburg, at the Board of Mayor and Aldermen, that crime is preventable. (We want to) say to you and our community, ‘If you see something, say something.’ And if all of us are involved, we believe that we can stop crime in our community,” Flaggs said. “We believe that we’ve already had an impact, and are having an impact, on crime. We feel we’ve got the best team going forward (to do so).”