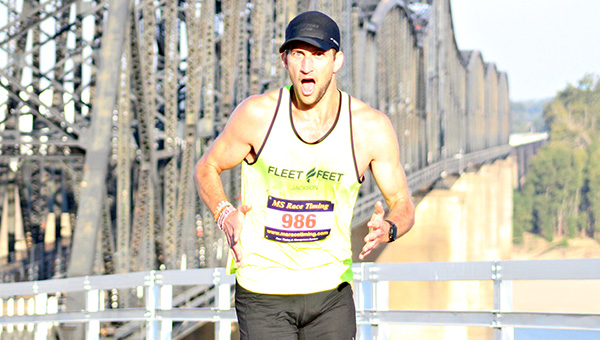 Peter Kazery heads down the home stretch at the 34th annual Over the River Run on Saturday. Kazery won the 5-mile run for the third time, with a time of 27:07. (Ernest Bowker/The Vicksburg Post) 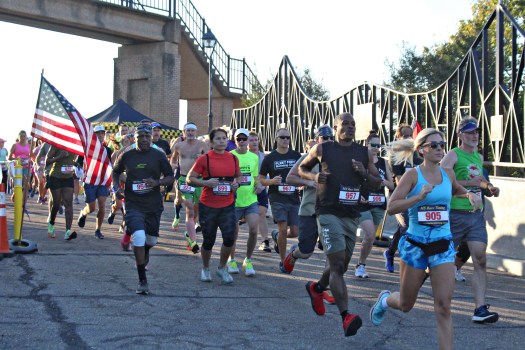 Runners start the 34th annual Over the River Run on Saturday morning. The event takes runners and race walkers on a 5-mile journey across the Old Mississippi River Bridge and back. (Ernest Bowker/The Vicksburg Post) 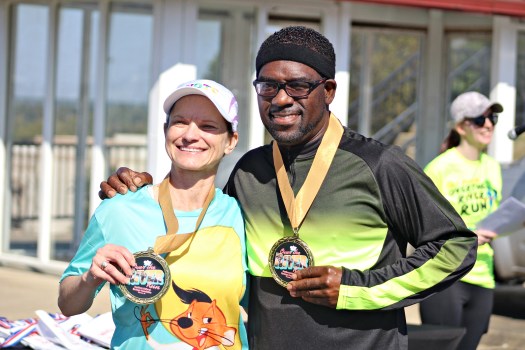 Sonja Dufrene, left, and Larry Robinson show off their first-place medals after winning the 5-mile race walk Saturday at the 34th annual Over the River Run. (Ernest Bowker/The Vicksburg Post) 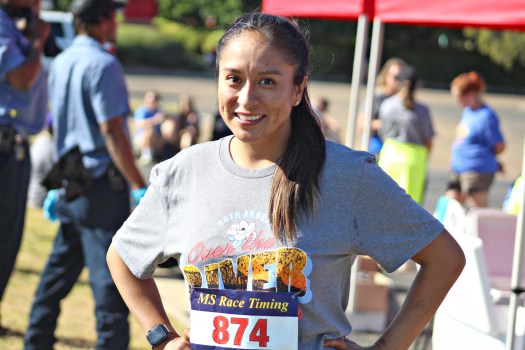 Laura Jimenez won the women's 5-mile run championship at the 34th annual Over the River Run on Saturday, with a time of 36:51. (Ernest Bowker/The Vicksburg Post) 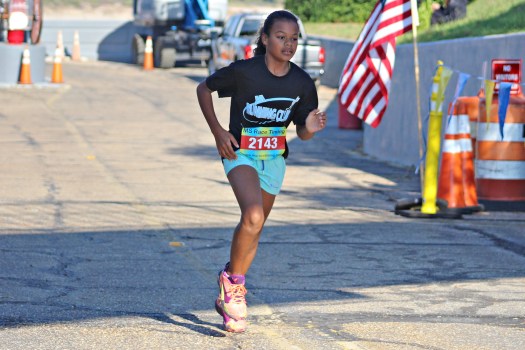 Ryleigh Grace Brown heads for the finish line of the Over the River Run's 1-mile fun run on Saturday. Brown won the girls' title and finished second overall, with a time of 7:59. (Ernest Bowker/The Vicksburg Post) 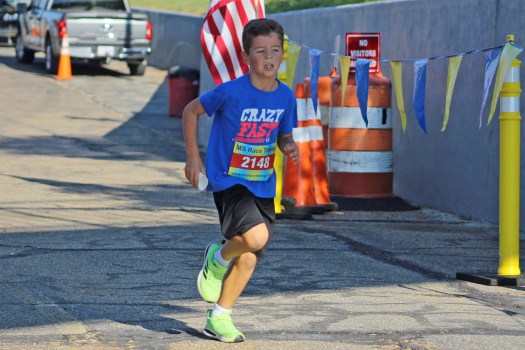 Titus Williams heads for the finish line of the Over the River Run's 1-mile fun run on Saturday. Williams finished first overall, with a time of 7:51. (Ernest Bowker/The Vicksburg Post) 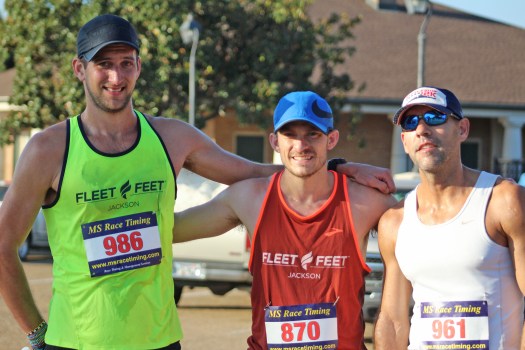 From left, Peter Kazery, Ryan Crandall and Caleb Hammons pose for a photo after the 34th annual Over the River Run. The trio finished first, third and second, respectively, in the 5-mile run. (Ernest Bowker/The Vicksburg Post) 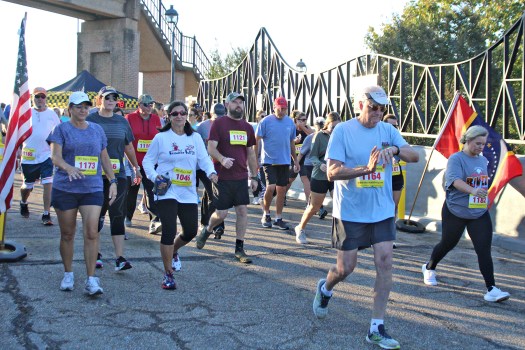 Race walkers start the 34th annual Over the River Run on Saturday morning. The event takes runners and race walkers on a 5-mile journey across the Old Mississippi River Bridge and back. (Ernest Bowker/The Vicksburg Post)

A competitive finish ceded the spotlight to a controversial one at the 34th annual Over the River Run.

Peter Kazery won a three-way duel in the 5-mile run across the Old Mississippi River Bridge on Saturday, but it was the 5-mile race walk that stirred up controversy and an overturned result.

Tim Cutler had his apparent victory stripped over accusations of using improper form, giving Larry Robinson his 10th overall championship in the event.

Cutler vehemently denied the allegations and called it “poor sportsmanship.”

Race walking rules require competitors to maintain contact with the ground with one foot at all times, otherwise they are considered to be running. There were no judges on the course at the Over the River Run, so walkers were left to police themselves — which some did. 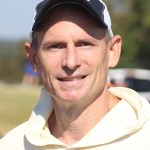 Robinson said he questioned Cutler about his form during the race and a runner, William Lloyd, did the same. Lloyd also confronted Cutler after the race, and raised the issue with race officials.

“I was about a mile out and I noticed it. He was leaning, and it looked like he was jogging. I said, ‘Hey man, it looks like you’re trying to jog,’ and he said he was keeping one foot down,” Robinson said. “I was enough behind (Lloyd) and thought they were together. I didn’t know what was going on and it looked like both of them were jogging together and talking. Then they went on and that was the last I saw of them.”

As other walkers filtered across the finish line, several said they observed Cutler using improper form and backed the claims of Robinson and Lloyd. Others said they didn’t see Cutler do anything wrong.

“I could have run this race and won my age category. So to have a person that’s running a 10- or 11-minute mile tone in on my form like they even know what they’re talking about, it’s ludicrous,” Cutler said, referring to Lloyd. “When you go recruit witnesses, of course. I could find an equal number of witnesses that say I didn’t. But nobody asked me to do that.”

OVER THE RIVER RUN RESULTS

OVER THE RIVER RUN PHOTOS

The Mississippi Race Timing officials said they had enough witnesses to find the accusations against Cutler credible. They switched his walk time of 50 minutes, 23 seconds to a run time and scored him 66th out of 133 runners while Robinson was declared the winner of the 5-mile walk with a time of 51:55.

Sonja Dufrene was the women’s winner, and fourth overall, in 55:54.

Robinson said he was happy to receive the win — his fifth in a row in the Over the River Run — but denied he was pushing officials to change the result.

“My thing is, I don’t want to make enemies with nobody. I was just trying to let him know,” Robinson said. “I wasn’t up there saying, ‘Hey, you’re running!’ I was just saying, ‘It kind of looks like you’re running.’ I’m going to enjoy it because I did train for it.”

Although he was obviously disappointed, Cutler said he begrudingly accepted the final result.

“There was no judges. There was no other fellow walkers that know what they’re actually doing out there that said I was running. I could have done the same thing and said to him, ‘Your form wasn’t proper,’ but I did not,” Cutler said. “It’s unfortunate. But there’s not much I can do about it.”

The drama in the 5-mile run, meanwhile, was more the traditional competitive kind.

Kazery won his third Over the River Run overall championship in six years by outlasting 2021 champ Caleb Hammons and Ryan Crandall in a three-way duel. The trio finished within a minute of each other.

“I’ve turned the gears. I’ve been going more ultra and trail stuff. I could have easily fallen back today,” Kazery said. “Caleb and Ryan were doing great. All it takes is one or two moves and they could go right by.”

Kazery said he never really pulled away from Hammons and Crandall, he just got a small lead heading into Louisiana and was able to maintain it on the trip back to Mississippi.

“At the turnaround it was 15 or 20 seconds. I never looked back. If they would have came up on me they would have maybe gotten me off a little bit,” Kazery said. “They both did a great job. The times don’t show sometimes what happens in the race, especially coming up that last little bit because it’s so steep.”

Kazery was greeted at the finish line by his wife Dana and parents Don and Terri. He said there was one other family member he wanted there but didn’t make it — his brother Newman, who got married later Saturday.

“I tried to get Newman to run,” Kazery said. “Congrats to Newman and Taylor.”

Laura Jimenez was the winner of the women’s 5-mile run. She had won Vicksburg’s summer race, the Star Spangled Night Run 5K, each of the past two years but this was her first victory in the Over the River Run.

She clocked a time of 36:51 and finished 11th overall. St. Aloysius eighth-grader Hendrix Eldridge was second in the women’s division and 13th overall, in 37:44.

“I wasn’t expecting this pace. My pace was supposed to be between eight and nine (minutes), but it was faster than I expected. I’ve been training with a good group,” Jimenez said.

Titus Williams and Ryleigh Grace Brown were the boys and girls’ winners, respectively, of the children’s 1-mile fun run. Williams won with a time of 7:51 and Brown in 7:59.