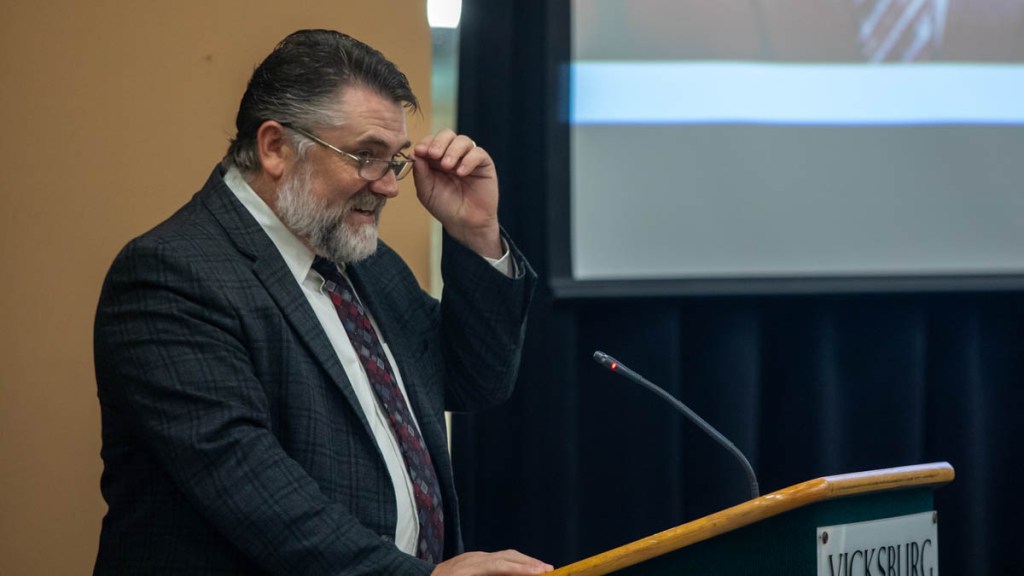 Superintendent Chad Shealy spoke at the monthly Chamber of Commerce luncheon on Wednesday about the recent accomplishments of the Vicksburg Warren School District and what they mean for the community. (Photo by Ben Martin | The Vicksburg Post)

The Vicksburg-Warren County Chamber of Commerce held its monthly luncheon on Wednesday.

The guest speaker for the event was Vicksburg Warren School District Superintendent Chad Shealy. The luncheon, held at noon at the Vicksburg Convention Center, was attended by city and county officials, chamber business partners and representatives of the school district.

Pablo Diaz, President and CEO of the Vicksburg-Warren Partnership, introduced Shealy by praising his dedication to his work.

“When I moved here five years ago, Chad was one of the people that I met with. And you could see the passion that he has about education and the community,” Diaz said. “On behalf of Economic Development, we never had a doubt that we weren’t going to move from where we were to a better place.”

Shealy began his presentation by highlighting the school district’s success in retaining teachers and staff during the COVID-19 pandemic.

“It’s an amazing time to be in this work. (In regard to) the obstacles that our staff had overcome over the last few years, with record numbers of educators leaving this business, we maintained our folks,” Shealy said. “Our people stayed and they worked extra hard through times that were insurmountable in the field of education, and I commend them.”

A video produced by the school district was then played in which Shealy highlighted some of its accomplishments, including the fact that VWSD has provided 21,063 college credit hours to students free of charge, saving their families a total of over $16 million over the past three years.

He also mentioned the all-time-high graduation rates for high schoolers in the district, and the district’s focus on making sure graduating seniors who are not going to college have the skills needed to join the workforce.

Shealy also spoke in the video about the district’s achievement of a B letter grade through the Mississippi Department of Education’s Accountability Model; up from a D rating in 2019. (The state letter grades were not assigned in the interim due to COVID-19.)

Shealy, who has publicly criticized the accountability model in the past, spoke about what the new letter grade represents for the district.

“This rating, although from a flawed accountability model, is important to our community and to the economic development in the region,” he said. “This score is one of many achievements that the district, our board, students, teachers, principals, staff members and families have worked tirelessly to reach. I hope you will join me in congratulating them on this most recent and exciting accomplishment.”

After the video finished playing, Shealy added that the new letter grade designation was never the end goal for VWSD.

The November chamber luncheon will be held on Nov. 16.