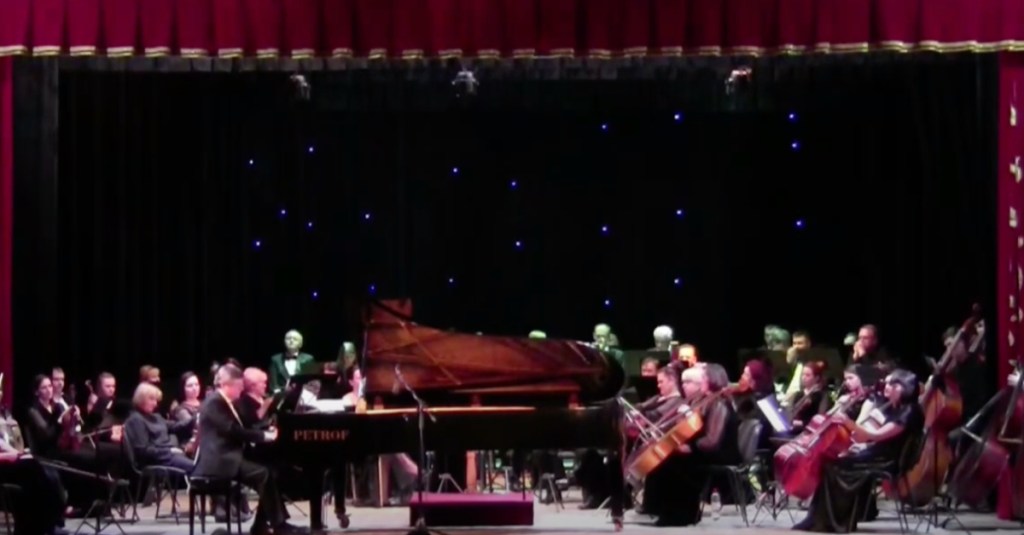 Ukraine-born concert pianist Volodymyr Zaitsev performs with a full orchestra. Zaitsev will play at the Church of the Holy Trinity on Oct. 26 at 6 p.m. (Photo courtesy of Volodymyr Zaitsev)

Since Vladimir Putin’s invasion of Ukraine, television news reports have exposed the effects of warfare.

The ravaged homeland of its people is heartbreaking, but even more gut-wrenching is the children who have been left orphaned and disabled due to the fighting and atrocities the Kremlin has given rise to.

For concert pianist Volodymyr Zaitsev, this situation hits closer to home than most living in the United States.

Zaitsev was born in Ukraine and in seeing what is going on in his homeland, wants to do what he can to help the neglected children. Therefore, benefit concerts have been scheduled throughout Louisiana as well as Vicksburg, with hopes of raising money for those most vulnerable.

The concert in Vicksburg will be held at 6 p.m. on Oct. 26 at the Church of the Holy Trinity.

Zaitsev immigrated to the U.S. when Ukraine was still part of the Soviet Union. He has since performed worldwide, even returning to his homeland, most recently in 2019 as part of the “From Mozart to Gershwin” project.

Naomi Cordill, who is from Louisiana and is a friend of Zaitsev, said Zaitsev reached out to her about the prospect of hosting benefit concerts for Ukrainians since she had previously worked with him in contracting musical tours for the state.

Cordill said she told Zaitsev she felt like people would be responsive to a benefit concert and performances were scheduled, including the one in Vicksburg.

“I told Volodymyr that all would know of the actions taking place in Ukraine and that he would not have to convince or convict them to understand his request,” Cordill said.

Funds received from the benefits were also discussed, she said.

“I asked him if he had a direct contact in Ukraine that he knew and could trust to actually get the ‘offerings’ to Ukraine, and if would they also guarantee that these particular orphans would actually receive the benefit of the funds,” Cordill said. “(Zaitsev) assured me that he did.”

Cordill said she researched the two Orthodox Priests who were Zaitsev’s contacts. One was from Ukraine, she said, and the other was a pastor at a church in New Jersey. She said the pastor from New Jersey provided her with the non-profit information on his church to show that it is legitimate.

And because Zaitsev does not want to handle any of the funds, Cordill said, each concert venue will be in charge of collecting donations.

Zaitsev’s concerts will last approximately 45 minutes and will include religious selections, worldwide selections and “beautiful” Ukrainian selections, Cordill said. Zaitsev will also be providing commentary to connect the selections of music.

“I have listened to most of the selections in the program and it will be an enjoyable, comfortable concert,” Cordill said.