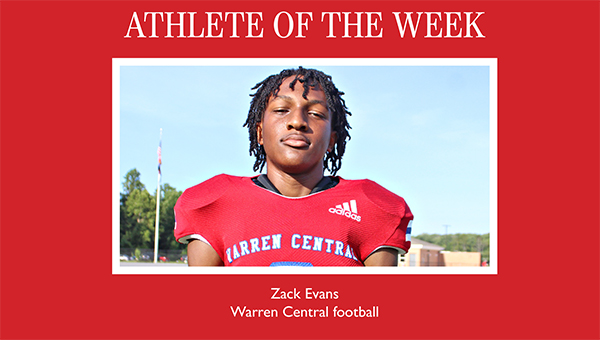 A handful of big plays on both sides of the football propelled Zack Evans to the latest Vicksburg Post Athlete of the Week award.

Evans, a senior wide receiver and defensive back for Warren Central, received 303 of 684 votes cast in an online poll by The Post’s readers to become the latest winner of the weekly award.

Evans contributed on both offense and defense in Warren Central’s 38-21 win over Pearl on Oct. 14.
While playing wide receiver, Evans caught two passes for 63 yards. One was a 40-yard reception that set up a touchdown as the Vikings scored 18 unanswered points in the fourth quarter to rally for the win.

At defensive back, he had two interceptions and assisted on three tackles.

Congratulations to Zack and the other nominees, and thank you to our readers for voting.

The nominees for the Athlete of the Week award are announced each week on Sunday, and voting is open until midnight Tuesday. Links to the poll will be posted on our Facebook and Twitter pages.