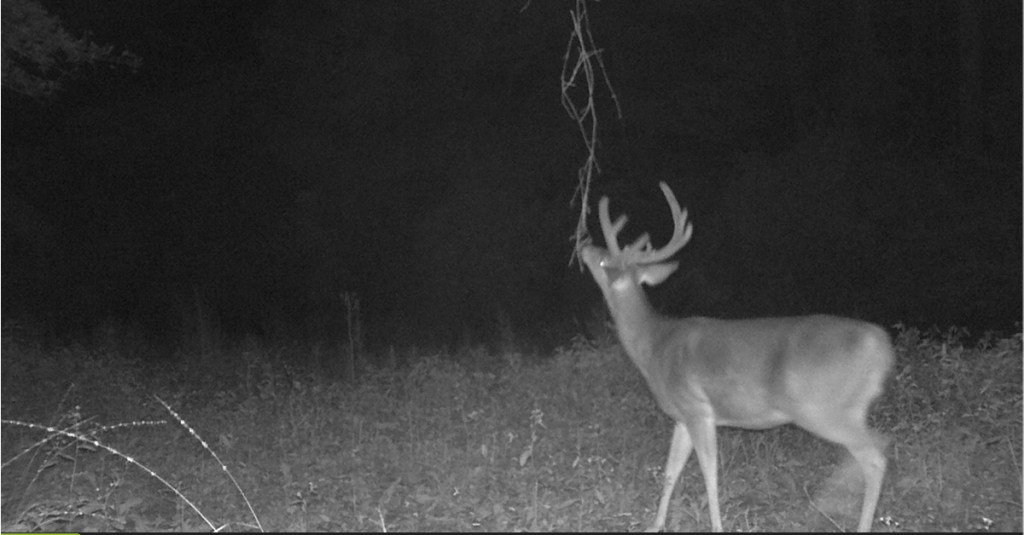 A buck checks out a licking branch on a line of scrapes along the edge of a food plot in Lincoln County. Mississippi State’s Deer Lab is working to see if they can detect CWD prions in samples taken from scrapes in North Mississippi at the heart of the CWD hot zone. (Hunter Cloud’s Trail Cam | The Daily Leader)

The funding will also allow Tribes to submit samples for testing at no cost.

Chronic Wasting Disease is an infectious neurological disease caused by a prion that is always fatal to deer. Prions are misfolded proteins and the CWD prions are shed into the environment throughout a deer’s life with the disease.

MDWFP Deer Program Coordinator William McKinley said they had several ongoing research projects in partnership with the MSU Deer Lab. Mississippi State acts as the research arm for the MDWFP.

Bronson Strickland, Co-Director of the MSU Deer Lab, said they actually had two research projects receive funding from the USDA. The first is a series of animated videos to help educate the public about CWD, how it spreads, how it affects a deer, how a hunter can submit a sample and how to handle the carcass and meat.

“The videos take something pretty complex and try to explain it in a way everyone can understand it. We have some videos on what is CWD and what are prions. We have videos on management of the disease,” Strickland said. “What was good about it was we built stories on it being useful in states or areas with CWD. It can also teach you how to be proactive and to help serve in areas that don’t have CWD. It is powerful.”

These videos will serve much of the southeastern states and will be shared with the partnered wildlife agencies including Tennessee, Missouri and Alabama.

He said they have finished a little over half the videos and should have the test complete by November. The plan is to release the videos to the public in November because it will be firearm season for most places.

These videos will be available on the MSU Deer Lab website and YouTube page. It will be the completion of a project that started a year ago.

A second project receiving funding will be the intra and inter-specific interactions between Wild Hogs and deer and how that could play a role in CWD spread and management.

This will be done through GPS collars placed on hogs and deer in the same area to see how they interact. Strickland said he has been a part of research projects before looking at hog movements in Mississippi.

MSU’s research would look closely at shared space and how much shared space they have. This could lead to answers on how or if hogs could exacerbate the spread of CWD.

“We got the notification a couple of weeks ago and haven’t started the project just yet,” Strickland said. “We are proposing to have the study done in north Mississippi. When you look at counties and samples. At this point, CWD is more prevalent there. Logistics and cost play a role in this too. North Mississippi is a happy medium between the prevalence of CWD and proximity to campus.”

He said one thing he has learned about hog movement in the past was how sows and deer had similar movements in space. By contrast, boars covered a greater distance than bucks did. One boar covered an area of 60,000 acres.

The USDA’s funding commitment is just for a year right now although it could change. He said their hope is to get as much information and data out of the collars as possible over the year. Battery life could limit some collars to nine months or a year and more.

It is not the only CWD research project they are conducting. Strickland said the MSU Deer lab is looking at the role scrapes could play in transmission.

“We are looking at collected samples from north Mississippi. We have the lab work going on now to see if we can isolate prions,” he said. “Management-wise, it would be good from a surveillance standpoint. We detect CWD in carcasses right now through hunter harvest. We are wondering because scrapes will concentrate deer. Maybe you can sample the environment. it could be a real game changer.”

Hunters have submitted 396 CWD samples since June 2022. Two suspect cases of CWD were detected last week in Benton County. A list of participating taxidermists and CWD sample drop-off locations can be found on the MDWFP website.

Across the river, Louisiana has sample drop-off locations in Madison, Franklin and Tensas Parishes, which are in the CWD management zone. Due to their one positive, they do not have a dashboard of samples and positives like other states do. LDWF Deer Program Director Johnathan Bordelon said last week he expects the samples to stream in during firearm season.