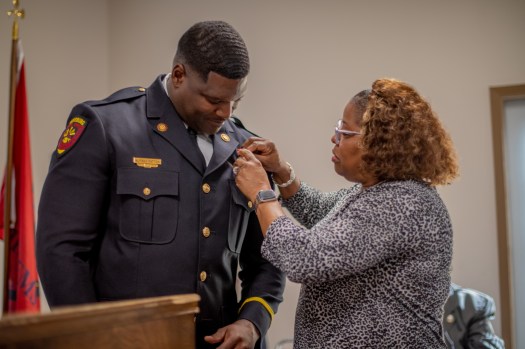 Captain Alfred Patton being pinned by his aunt Rosie Harris at the Vicksburg Fire Department Promotion Ceremony on Wednesday morning at the Department’s training center on Old Mill Road. (Photo by Ben Martin | The Vicksburg Post) 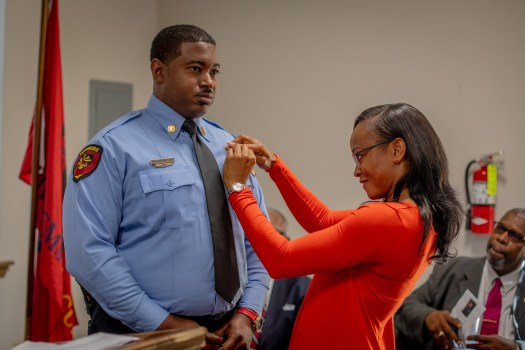 Lieutenant Kimani Ratliff during the ceremonial pinning performed by his fiance, Kathryn Trueheart at the Vicksburg Fire Department’s Promotion Ceremony at the training center on Old Mill Road on Wednesday. (Photo by Ben Martin | The Vicksburg Post)

The Vicksburg Fire Department held its 2022 Promotional Ceremony on Wednesday morning at the department’s training center on Old Mill Road.

The two firefighters receiving promotions were Captain Alfred Patton and Lieutenant Kimani Ratliff. Friends, family, fellow firefighters and city officials all gathered to see the pinning of the two men.

After an opening prayer and the National Anthem, Mayor George Flaggs Jr. took the opportunity to say a few words about his gratitude to the firefighters and their families.

Ward 1 Alderman Michael Mayfield also extended his thanks to the two firefighters for their hard work and dedication.

“You all do a great job. Whether you’re driving an ambulance, rescue, or fire truck, you all mean a whole lot to the city of Vicksburg and Warren County, Mississippi,” Mayfield said. “When I’m running from it, you all are running to it, so I can’t help but show you the utmost of respect.”

Fire Chief Derrick Stamps then spoke about the two promoted firefighters under his command and highlighted the qualities that have earned them their positions.

“We’re here to celebrate the two public servants that have advanced their careers to the next level. They have exemplified loyalty, dedication and more importantly, willpower to serve this community,” Stamps said. “We’re here for your family and friends to celebrate you. They are certainly proud of you, and rightfully so. They know how hard you had to work to reach this achievement.”

The ceremonial pinning of the two newly appointed firefighters then took place. Patton was pinned by his aunt, Rosie Harris, and Ratliff by his fiancée, Kathryn Trueheart. The two firefighters then addressed the audience to say thank you to everyone who has supported them throughout their careers.

“First and foremost I would like to thank God for being in this position. I’d like to thank my friends, family, and fellow firemen from the Vicksburg Fire Department,” Patton said. “I’d also like to give a big shout-out to my family.”

Ratliff echoed Patton’s sentiments. “I’d like to thank God for being in this position. I’m thankful to have my family that made it here today, and of course thanks to my fiancée,” he said. “And thanks to the Chief for the opportunities.”

After a prayer closed out the ceremony, the two firefighters had a crowd of people around them who wished to extend their congratulations.