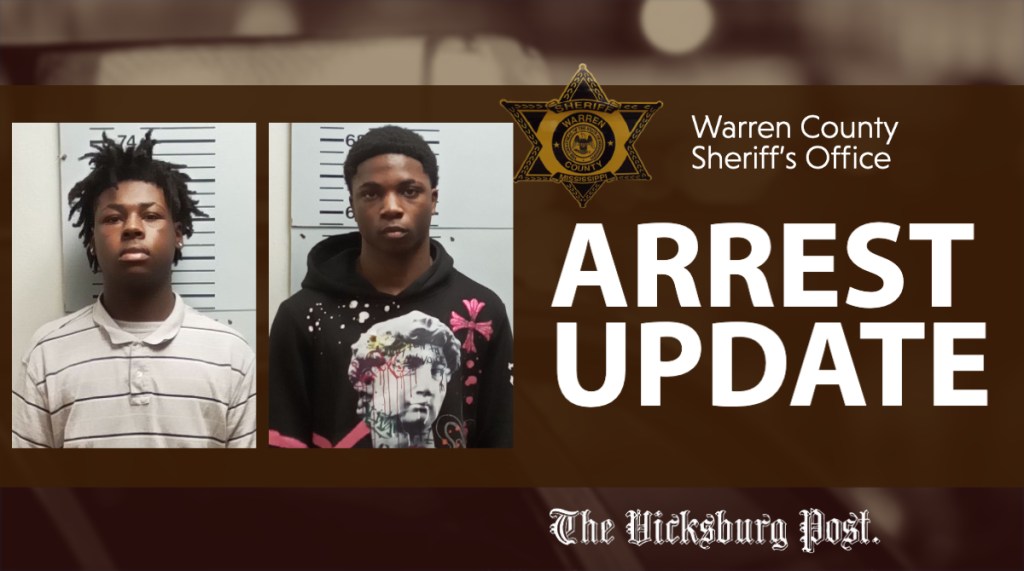 Two arrests have been made in connection with a shooting that took place in Warren County on Oct. 30. Further details on the incident were released by the Warren County Sheriff’s Office on Tuesday.

Authorities were alerted to the incident when Vicksburg 911 received a call reporting a vehicle crash in the parking lot of an apartment complex at 902 Blossom Lane on Oct. 30, just after 1 a.m.

Sheriff Martin Pace said that when deputies arrived, they found two individuals in a Nissan sedan, both with what appeared to be severe injuries.

The driver was identified as Cameron Jefferson, 17, of Vicksburg. He was pronounced dead at the scene and was found to have been shot.

A passenger in the vehicle, a 16-year-old juvenile, was transported to River Region Medical Center with injuries sustained in the crash.

Pace said that the investigation shows that three individuals, Jefferson, Marcus Lee, 18 and Cameron Kelly, 18, all of Vicksburg, arrived at the apartment complex looking for the 16-year-old. The sheriff added that investigators believe the three were there with the intention of assaulting the juvenile.

All three were wearing masks and at least one was armed with a handgun. The vehicle which would ultimately crash arrived in front of an apartment, with multiple individuals exiting and going inside.

The three masked individuals went to the apartment, with two standing guard out front while the other forced his way inside to look for the juvenile, who was not there.

The three then left the apartment and one of them, Cameron Dion Jefferson, got inside the running Nissan sedan.

“We don’t believe at that time that they realized that the 16-year-old was in the car in the back seat,” Pace said. “As the car sped away, the 16-year-old, who was also armed, shot and killed Cameron Jefferson, who was the driver.”

Lee surrendered to authorities on the morning of Nov. 3. Kelly surrendered on Nov. 4 in the afternoon.

Both Lee and Kelly were charged with the murder of their accomplice. Each has had their initial appearance in court and are being held without bond.

“Under Mississippi law, if you are participating in a crime, and anyone, including your own accomplices, are killed, you can and should be charged,” Pace said.

Charges have not been filed against the 16-year-old.

The incident is still being investigated by the Warren County Sheriff’s Office.

“There are still details of this incident that we are working on. This is an active, ongoing investigation,” Pace said. “We are working alongside the District Attorney’s Office, and it is our plan that this case will be presented to the Grand Jury as early as January.”

Pace added that the Sheriff’s Office will release more details to the public as the investigation continues and it is appropriate to do so.