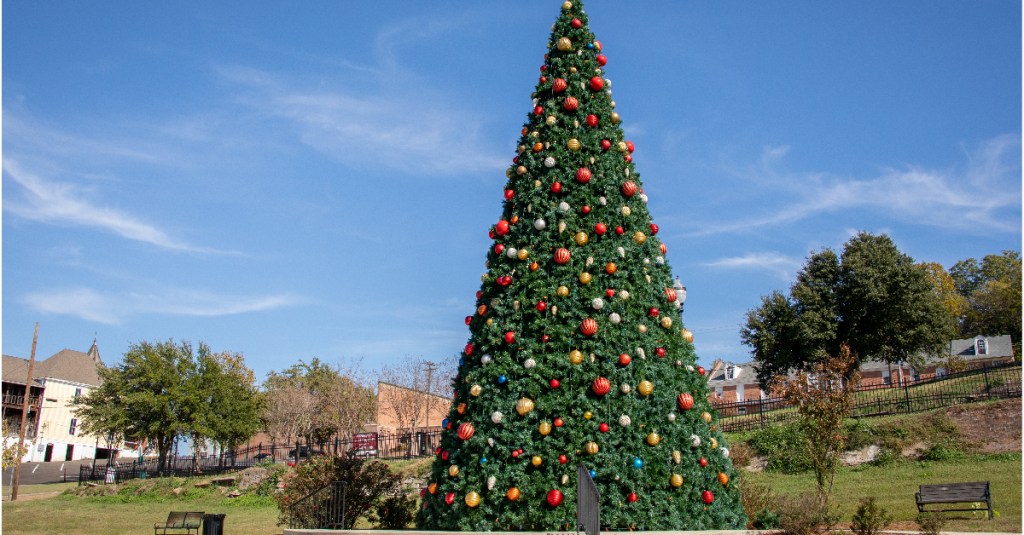 The 45-foot tall Christmas tree recently put up in Washington Street Park took a week and a half for workers to set up. The lighting ceremony will be held on Nov. 25 at 6 p.m. The tree is being displayed in honor of the late Margaret Gilmer, a local business leader. Gilmer set up the tree every year during the Christmas season at the Vicksburg Outlet Mall, of which she was co-owner. (Photo by Ben Martin)

The City of Vicksburg and the Vicksburg Main Street Program have erected a 45-foot tall Christmas tree in the middle of Washington Street Park for the community to enjoy — and the tree holds sentimental value for those who knew and loved one of the city’s late business leaders.

Kim Hopkins, the Executive Director of the Vicksburg Main Street Program, said it took 15 trailer loads to transport the metal tree in pieces to the park, where it took workers a week and a half to assemble.

“People are amazed at the sheer size of it and its magnificent beauty,” Hopkins said. “It will surely be a great addition to our downtown festivities and a picture opp.”

The structure dwarfs the tree used in previous years, which stood at 16 feet. Hopkins said the old tree will still bring holiday cheer to visitors downtown when it is set up at its new home at Crawford Square, just a few blocks away.

The official tree-lighting ceremony by Mayor George Flaggs Jr. will be held on Nov. 25 at 6 p.m. at Washington Street Park. It will feature an evening of music and a special visit from Santa Claus for children.

Hopkins said the tree is being displayed in memory of the late Margaret Gilmer, a local businesswoman and community leader who died on Jan. 2 of this year.

Gilmer co-owned the Vicksburg Outlet Mall, where she had an annual tradition of setting up the huge tree for the Christmas season. Gilmer’s husband, Leon, reached out to the city to see if they would be interested in using the tree and was taken up on the offer.

Pablo Diaz, President and CEO of the Vicksburg-Warren Partnership, was a good friend of Gilmer.

“It is very fitting to have a Christmas tree dedication for downtown that at the same time honors Mrs. Gilmer,” Diaz said. “I was recently reminiscing about her selfless dedication to our community, and I love the idea that part of her legacy can shine upon our beautiful downtown in this most giving season of the year.”

Mary Jane Fant is Gilmer’s daughter. She recalled a variety of exciting events with her mother hosted at the Outlet Mall when the tree was on display. One involved Santa Claus making a skydiving entrance.

“We would have a big tree lighting every year,” Fant said. “(One) year Santa Claus parachuted in and dropped down and we lit the tree. Then all the kids were lined up to sit in his lap.”

Another time, Gilmer and the other owners had ping pong balls dropped from an airplane flying over the Outlet Mall. Each ping pong ball contained discounts for the stores there.

“She loved it. Christmas was her favorite time of year. And they did so many events at Christmas for the families,” Fant said. “I just think even after death, her contributions to our community keep on giving. That’s what the giving season is all about.”