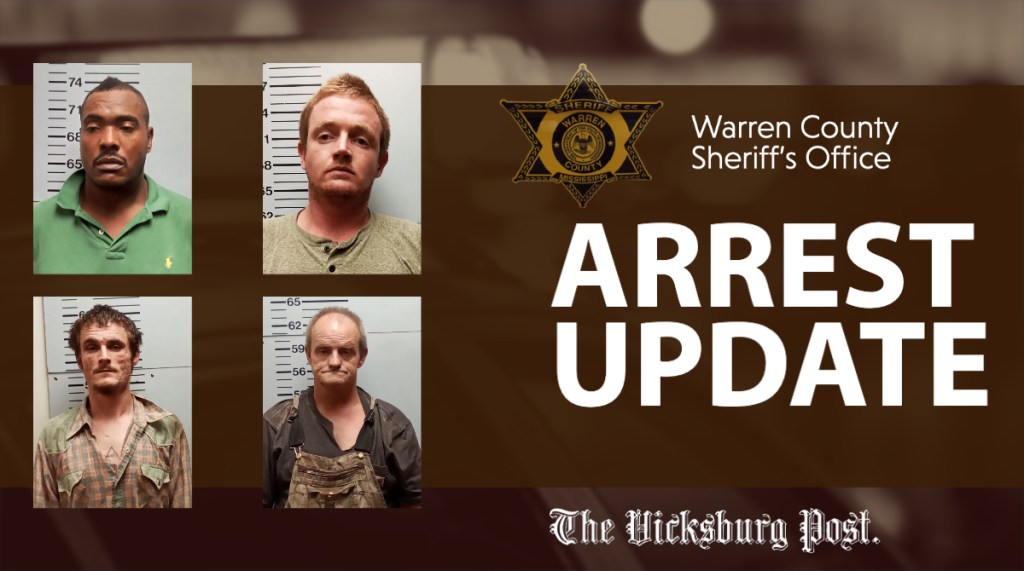 The Warren County Sheriff’s Office arrested three individuals between Nov. 4 and Monday on outstanding capias warrants, issued from the circuit court for failing to comply with the court after having been charged. Another individual was arrested and charged with possession of methamphetamine.

One arrested for capias, felon in possession of firearm

Deputy David Culberston made a traffic stop on a 2004 Chevrolet Trailblazer on Highway 61 North just after 1 a.m. on Nov. 4. The driver of that vehicle was arrested for a first-offense DUI.

“I think what’s most disturbing about this is that Mr. Mixon was out on bond for being a convicted felon in possession of a firearm, then failed to appear in court, and now he has another firearm,” Sheriff Martin Pace said. “I’m sure all of these factors will come into play when this is presented to the court.”

Arrest for capias during traffic stop

A routine driver’s license check revealed that the driver, Joseph Baggett, 30, of Warren County, had an outstanding capias for failing to appear for a hearing in January. Baggett was then taken into custody.

The rider, Andrew Hearn, 25, of Warren County, gave Whitley a false name before fleeing. After a short foot chase, he was taken into custody. Andrew Hearn, 25, of Warren County, had an outstanding capias for failing to appear at his trial for a charge of auto burglary in May. He has now been charged with misdemeanor charges of providing false information to law enforcement and resisting arrest.

One arrested for possession of meth on Freetown Road

Shortly after Hearn’s arrest, an individual walking on Freetown Road was stopped and questioned by deputies.

Benjamin Clarke, 50 of Warren County, was charged with possession of methamphetamine. Clarke had an initial appearance in court and has been bound over to the Grand Jury.

Pace said that the individuals arrested on capiases will appear in circuit court where they will meet with the judge in front of which they initially failed to appear.