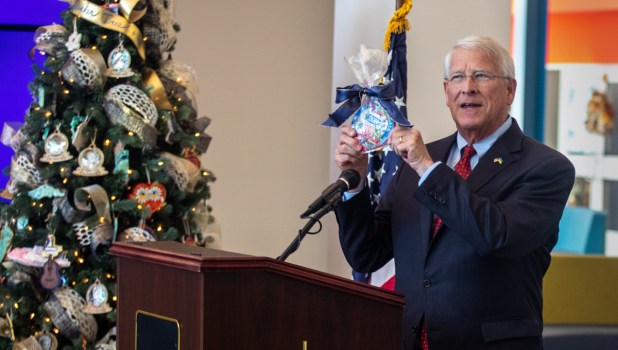 Senator Roger Wicker displays one of the ornaments that were made by Academy of Innovation students during his visit to the school on Thursday. Wicker will be bringing the ornaments back to his office in Washington D.C. where they will be hung on his Christmas tree. (Photo by Ben Martin | The Vicksburg Post) 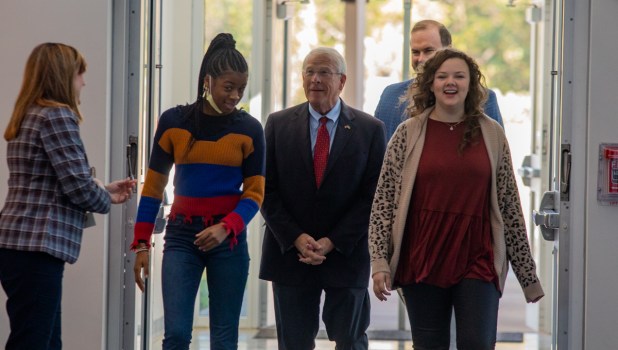 Academy of Innovation students Armanni Smith (seventh grade, left) and Chloe Hardy (eighth grade, right) escort Mississippi U.S. Senator Roger Wicker (middle) to the lobby for the presentation where Wicker would be given Christmas ornaments made by students on Thursday. (Photo by Ben Martin | The Vicksburg Post) 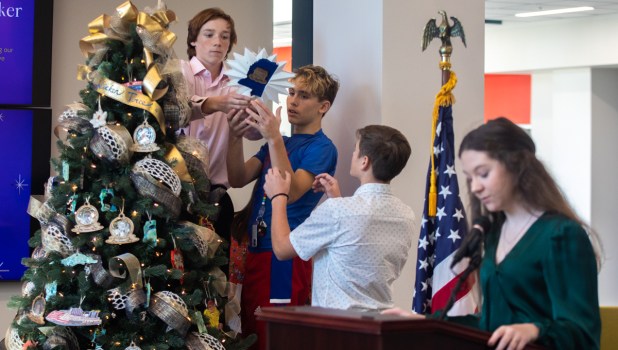 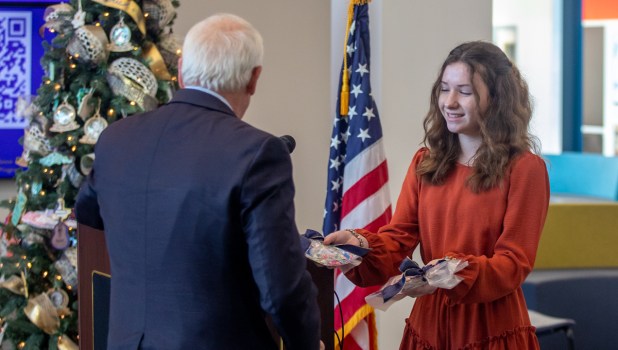 Lillian Feibelman, eighth grade student at the Academy of Innovation, hands Senator Roger Wicker ornaments that were made by academy students during Wicker’s visit to the facility. (Photo by Ben Martin | The Vicksburg Post) 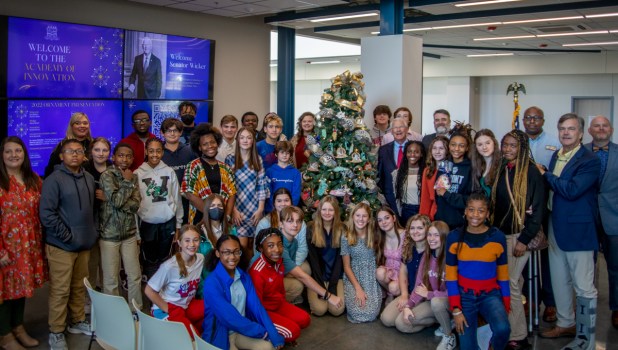 Students and faculty pose with Senator Roger Wicker during his visit to the Academy of Innovation on Thursday morning. (Photo by Ben Martin | The Vicksburg Post) 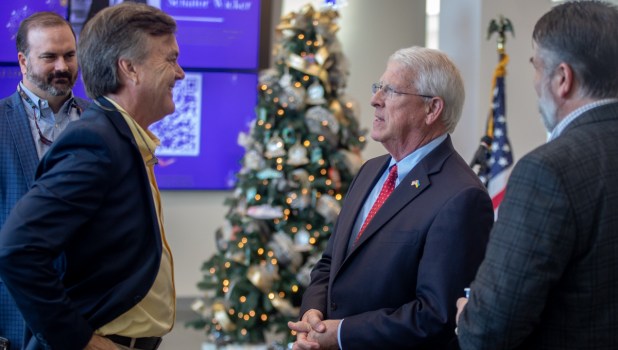 Vicksburg-Warren School District Board President Kimble Slaton greets Senator Roger Wicker during his visit to the Academy of Innovation on Thursday. (Photo by Ben Martin | The Vicksburg Post) 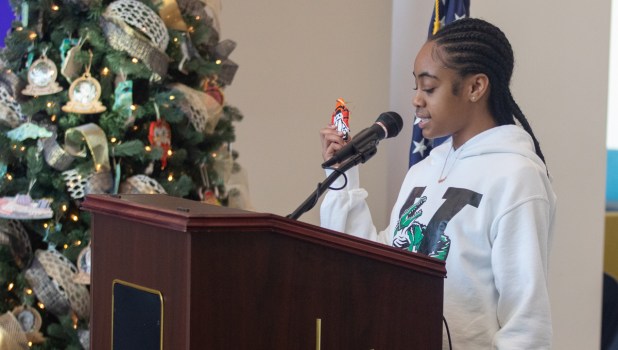 Eighth grade Academy of Innovation student Diamond Jackson speaks about two of the ornaments being presented to Senator Roger Wicker during his visit to the Academy on Thursday. (Photo by Ben Martin | The Vicksburg Post) 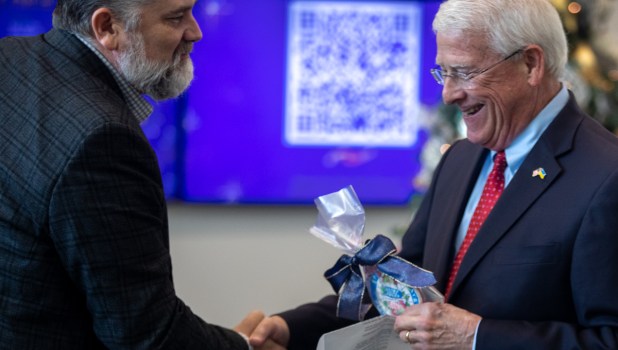 U.S. Senator Roger Wicker visited the Vicksburg-Warren School District’s Academy of Innovation (AOI) on Thursday morning. He came to receive Christmas ornaments made by students for him to adorn his Christmas tree in his office in Washington D.C.

“In our office, we always do a Christmas tree, and we display not only the talent of young people from our state, but also the notable things that our state has done,” Wicker said to students. “People from all over the Capitol come to Senator Roger Wicker’s Office just to see his Christmas tree.”

The theme of the tree was “Illuminated Innovation, A Chronicle of Culture and Creativity in Mississippi.” Seventh- and eighth-grade students at the AOI researched famous Mississippians who have made unique contributions to society, then made ceramic ornaments based on those historic figures in pottery class.

One of about a dozen students who spoke at the event was eighth-grader Diamond Jackson, who presented two ornaments representing famous Mississippians who have made a large impact on STEAM (Science, Technology, Engineering, Art and Mathematics) fields. One was shaped like a heart, the other had a sculpted rocket ship on the front.

“The heart ornament is in honor of the first heart transplant, which was performed at (the University of Mississippi Medical Center) in 1964 by Dr. James D. Hardy,” Jackson said. “The rocket ornament is dedicated to astronaut Fred Hays of Biloxi, Mississippi.”

A team of students also made a tree topper for the senator using state-of-the-art methods. One of the students who presented the topper was eighth-grader Kailyn Ehrhardt, who explained the process used to create it.

“This tree topper was made very special by having our state as well as our AOI  school logo represented. The design was made by Chanice Anderson (eighth grade), which was then 3D printed. Then, the full assembly as well as the combination of clear and cobalt acrylic was added. After, our robotics team added some LED lights for a little special effect,” Erhardt said. “We would like to present this tree topper to Senator Wicker, to take the journey to Washington D.C. We hope for safe travels for the decorations and everyone involved with the project.”

After 8th grader Lillian Feibelman handed the Senator the ornaments, he took the opportunity to address the students.

“This is so, so excellent,” Wicker said. “Thank you all for reminding us about what an extraordinary group of citizens Mississippians are by showcasing…. great artists and people in the media and athletics.”

He then offered words of encouragement to students. “I hope it encourages all of you to do your very best and reach for the stars. And you know, some of you will be heroes in your small town,” he said. “And some of you may be like some of these folks and be well known. But no question about it, you are receiving an education here in Vicksburg and Warren County that is among the best in the world.”

VWSD Superintendent Chad Shealy spoke to the students after Wicker. He told them he was excited about the work they put into the creation of the ornaments.

“It was amazing to look and see,” Shealy said. “You chose these people because they had something that was remarkable to you individually, and you’re sharing it with the world.”

After the presentation, Wicker went on a student-led tour of the AOI facility to see what it offers to students in the VWSD.

When asked about school funding in Mississippi, Wicker told The Vicksburg Post that he believes it is important to support the kind of learning being provided to the students he met that day.

“We certainly need to assist with the STEAM education. And this example we have here in Vicksburg (and) Warren County is just terrific,” he said. “So I think there’ll be some assistance to make sure that all students in the United States have the same opportunities that we have right here.”