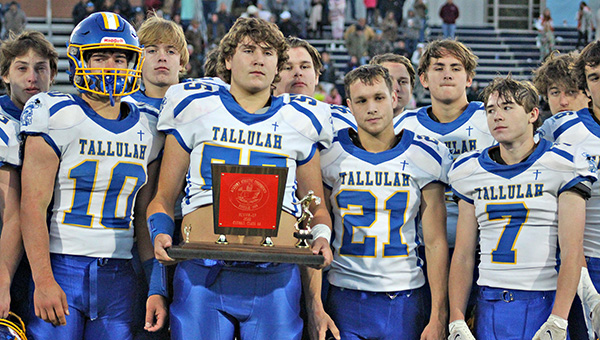 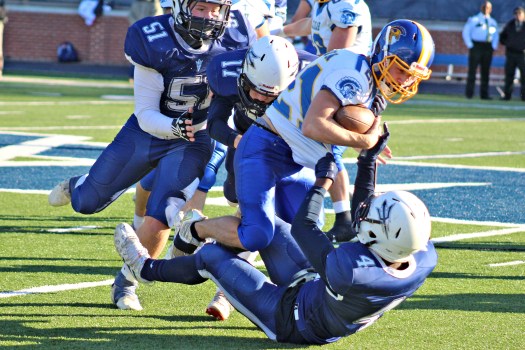 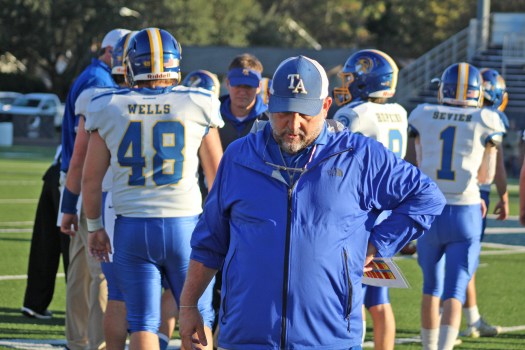 Tallulah Academy football head coach Bart Wood walks back to the sideline during a timeout in the MAIS Class 2A championship game against Tunica Academy. (Ernest Bowker/The Vicksburg Post) 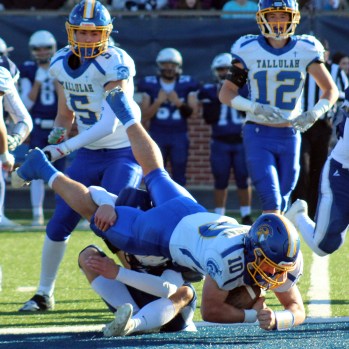 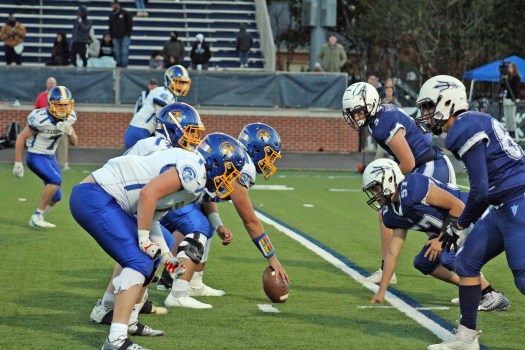 JACKSON — Tallulah Academy running back Brayson Morson lowered his shoulder, kept his legs churning for extra yardage as two defenders tried to bring him down, and bulled his way inside the 15-yard line.

An instant later, one of the Tunica Academy defenders ripped the ball loose and recovered it. On the next play, the Blue Devils scored on an 81-yard touchdown pass.

It was that kind of day for Tallulah. Even when something went right, it quickly went wrong.

Tunica Academy quarterback Curt Berry completed 11 of 14 passes for 264 yards and four touchdowns, and also ran for a touchdown, as the Blue Devils routed Tallulah Academy 46-6 in the MAIS Class 2A championship game on Thursday.

“We weren’t really prepared, and we couldn’t stop their athletes. They beat us every aspect of the game, and props to them for it,” Tallulah quarterback Dee Morgan said.

Tunica Academy (12-0) finished an undefeated season with its first 8-man championship. It is the school’s third title overall, along with 11-man titles in 1991 and 2018.

“It’s just a great experience to be here, but it’s not what you want at the end,” Morgan said. “It’s hard, I’m not going to lie.”

The game started off great for Tallulah as it recovered an onside kick on the opening kickoff. It turned the ball over on downs without picking up a first down, however, which was a sign of things to come.

Tunica converted two third downs on the way to the first score of the game, an acrobatic catch in the end zone by B.J. Bryant for a 26-yard touchdown with 4:06 left in the first quarter.

Early in the second quarter, Bryant made another outstanding reception. On fourth-and-3 from the Tallulah 43, he fended hauled in a deep pass with one hand in tight coverage. Jeremiah Clark scored on a 10-yard run on the next play.

Tunica also added a 75-yard touchdown pass from Berry to Almonza Payne, and an 11-yard TD pass to Clark later in the quarter. Two-point conversions after all four touchdowns sent the Blue Devils into halftime with a 32-0 lead.

“We were stalled out a little bit. (Tallulah) plays really hard and they’ve got a bunch of speed on defense. It took us a minute to get our feet on the ground and get us going. Those two guys have made those type of plays all year long,” Tunica coach John Holcombe said of Bryant and Payne.

Tallulah had been averaged more than 50 points per game, but never came close to getting its offense into gear when it mattered Thursday.

The Trojans were held to a stunningly low 22 yards and two first downs in the first half. Morgan was sacked three times, and 12 of Tallulah’s 22 offensive snaps went for one yard or less. Seven plays lost yardage.

Morson’s fumble came on the first play from scrimmage of the second half, after he had gained 15 yards and was fighting for more.

Payne turned a short pass into an 81-yard touchdown on the next play to push Tunica’s lead to 38-0.

Tallulah avoided the shutout with a touchdown on its next possession. Morgan completed a 35-yard pass to his brother Cade Morgan on fourth-and-long, then threw a 10-yard TD to Landry Tweedle with two minutes left in the third quarter.
Dee Morgan finished 5-of-11 passing for 51 yards and one touchdown, and ran for 15 yards on 11 carries. Morson led the Trojans with 52 rushing yards on 10 carries.

For Tunica, Berry had 72 rushing yards and a 48-yard touchdown in the fourth quarter to go along with his impressive passing stats. Payne caught five passes for 190 yards and two touchdowns, and Bryant caught four passes for 67 yards and a TD.

Tunica scored on its first six offensive possessions. On the seventh, it took a knee to run the final seconds off the clock.

“These guys were focused and locked in all year long. They got an idea of what could happen for them and they bought in,” Holcombe said. “It’s been a great group of guys. The seniors have been awesome. And we’ve got some really good players, and that goes a long way.”

Even though they came up short in their final game, Wood had similar high praise for his players. Tallulah had 10 seniors on the roster who posted a 25-11 record and made two championship game appearances in the past three seasons.
Wood hoped that his players don’t lose sight of the great run they’ve had the past few years.

“I know they’re upset right now, but I hope they realize that they’re state runner-up. There’s only two teams left,” Wood said. “We were 10-2. I don’t know how much better you can ask.”