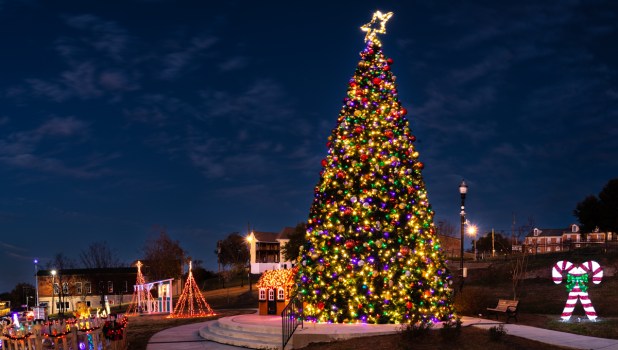 Christmas decorations make downtown Vicksburg glow. They were put up by a team consisting of the Vicksburg Mainstreet Program as well as the Landscaping, Parks and Recreation, Traffic, and Building and Inspection Departments of the City of Vicksburg. It took about six weeks for the team to complete the task. (Photo by Ben Martin | The Vicksburg Post) 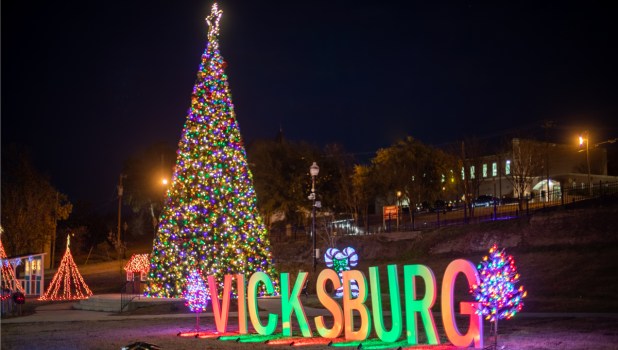 Ricky’s Welding and Machine Shop finished and installed the new “Vicksburg” sign in Washington Street Park just in time for Christmas. The sign will become a permanent fixture in the space. (Photo by Ben Martin | The Vicksburg Post) 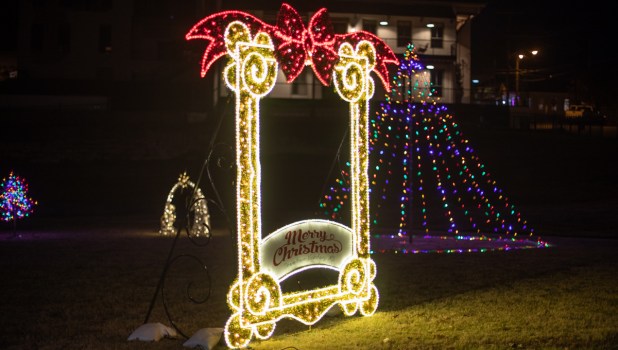 The large picture frame made of Christmas lights in Washington Street Park is a great place for visitors to snap a photo. (Photo by Ben Martin | The Vicksburg Post) 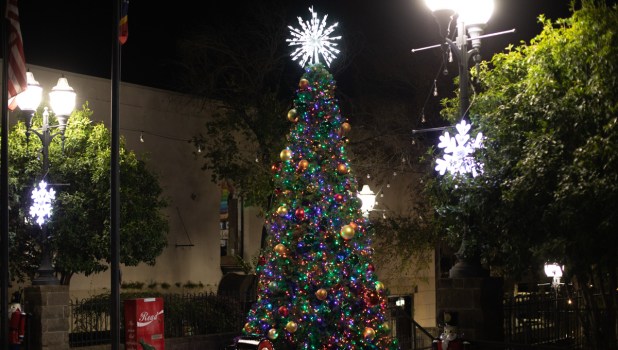 The smaller Christmas tree that was formerly used in Washington Street Park has found a new home at Crawford Square in downtown Vicksburg. (Photo by Ben Martin | The Vicksburg Post) 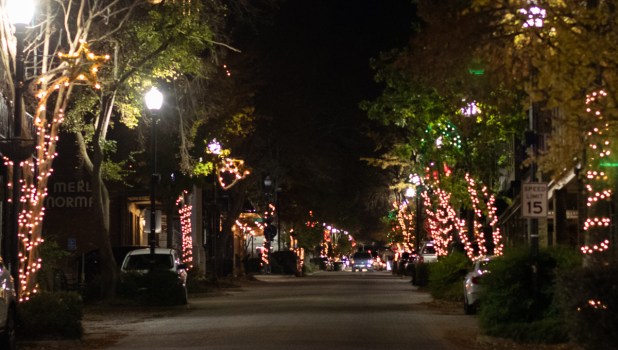 Washington Street is now lined with Christmas cheer thanks to a large team effort. (Photo by Ben Martin | The Vicksburg Post)

The scene is the result of a combined effort by Vicksburg Main Street and the Landscaping, Parks and Recreation, Traffic, and Building and Inspection Departments of the city of Vicksburg.

Kim Hopkins is the Executive Director of the Vicksburg Main Street Program.

“It brings me so much joy to see people downtown taking pictures at Washington Street Park and Crawford Square around the trees and other décor,” Hopkins said. “Everyone drives a little slower to see all the lights, and I just feel like it really puts you into the holiday spirit. So many people tell me how excited they get when they see the lights and banners start going up on Washington Street.”

The team wrapped lights around trees and attached vibrant wreaths to lamp posts that line the street. Washington Street Park also now has numerous lights and Christmas features thanks to the team’s effort.

Hopkins said one of her favorite features of the decorations this year is the centerpiece, a 45-foot tall Christmas tree that shines in the middle of Washington Street Park. The tree belonged to Margaret Gilmer, a well-known businesswoman and community leader in Vicksburg who died earlier this year. Her family worked with the City of Vicksburg and the Main Street Program to bring the tree to the park. Many locals have begun calling it the “Gilmer Tree.”

“When the city was contacted by the Gilmer family about the tree, we were overjoyed to have it featured as our official tree,” Hopkins said. “It added more work to all departments, but it all came together and it looks just wonderful. “

Gary Jackson, Supervisor for the Parks and Recreation Department, was sitting inside the tree at the time of the lighting ceremony on Nov. 25. He was there to make sure he could have access to the electrical controls in case there was a problem with the circuit breakers for the lights.

While adding decor around the tree with other workers, Jackson said he had the idea to make the reindeer farm that sits near the base of the tree. Jackson said that the space the farm takes up is on a natural spring.

“That (area) right there stays wet year round, so we always had to do something. We used to just put that old picket fence there,” he said. “I thought, maybe let’s get some reindeer and make a reindeer farm out of it. They liked that, so they went with it.”

The decorating was very much a collective effort, according to Assistant Director of the Mainstreet Program, Ritch Southard.

Other features in the park include a large picture frame covered in lights for visitors to snap photos with, and an array of interactive pads that light up and play different notes when stepped on.

Hopkins said she is excited for people to come to see the results of the team’s hard work.

“Getting Vicksburg decked out has been a true team effort, and there’s nothing like coming together during the holiday season,” she said. “I hope that people will come down and see the decorations, do some local shopping, eat at our great restaurants, visit some of our art galleries and museums and walk the streets of downtown.”