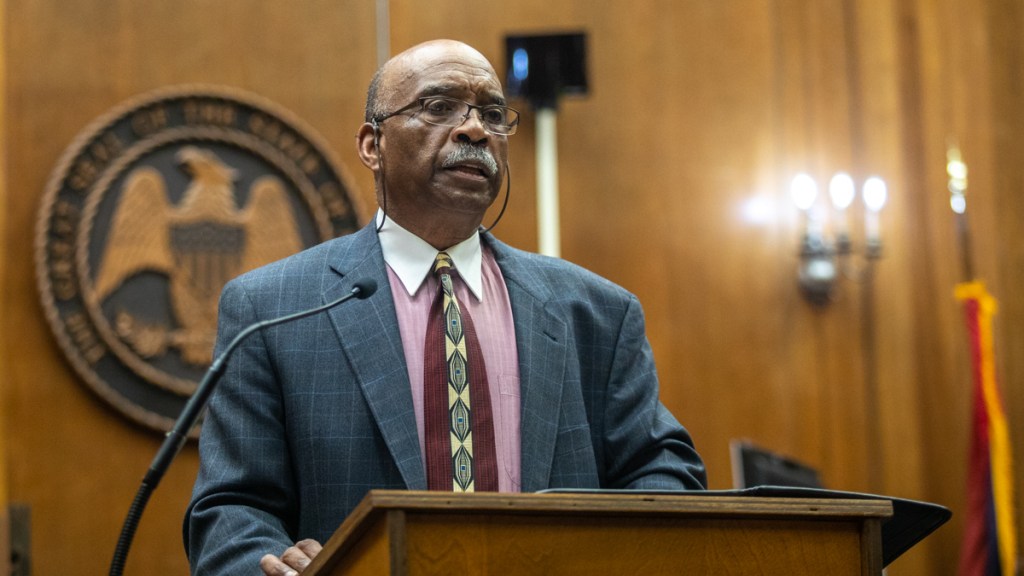 Retired 9th District Circuit Court Judge Isadore Patrick spoke to graduates at the ceremony about his pride in what they have accomplished. (Photo by Ben Martin | The Vicksburg Post)

The Warren County Intervention Court (previously called Drug Court) held a graduation ceremony on Thursday for participants who have completed the program.

The court is designed to allow certain individuals convicted of drug offenses to become clean and sober by meeting certain requirements over the course of several years, as an alternative to serving time behind bars.

After an invocation, Judge James Chaney of the 9th Judicial District Circuit Court spoke to the graduates, of which about a dozen were in attendance, accompanied by family and friends. Chaney spoke about his pride in the accomplishments of the graduating class.

“This is the goal. This is where you want to be: A future that is free of addiction,” he said.

The guest speaker at the event, which was held in the second-story courtroom at the Warren County Courthouse, was retired 9th Judicial District Circuit Court Judge Isadore Patrick.

“(When this court was created), a lot of people thought that Drug Court was being soft on crime. They would say ‘Why would you do that? Why would you take our tax dollars and give them to someone who had voluntarily taken drugs and gotten themselves in that situation?’” he said. “And it took a while for us to explain that it was not only for the drug (users) but also for the citizens of our county, especially the family of the participants.”

Patrick also spoke about the hard work participants put into the program that allowed them to graduate, and the inevitable difficulties they had to overcome.

“Our requirements are that you give up persons, places and things that cause you to be in trouble, big trouble,” he said. “And it’s not easy to tell your friends, particularly that you’ve known all your life, ‘I can’t be with you anymore.’ To tell some of your family, ‘I can’t do that type of thing anymore, so I’m going to have to walk away.’ That’s not easy.”

Among other requirements, participants are routinely drug tested and attend regular addiction recovery meetings, as well as consistently have to check in with law enforcement.

“I’ve seen the joy in the family members who see value in this program,” Patrick said. “And when their loved ones receive that diploma (proving) that they have gone through drug court, (I’ve seen) the smile on their faces, and joy in their hearts.”

After Patrick’s remarks, the graduating class stood smiling at the front of the courtroom, diplomas in hand, cheered on by an audience of loved ones.