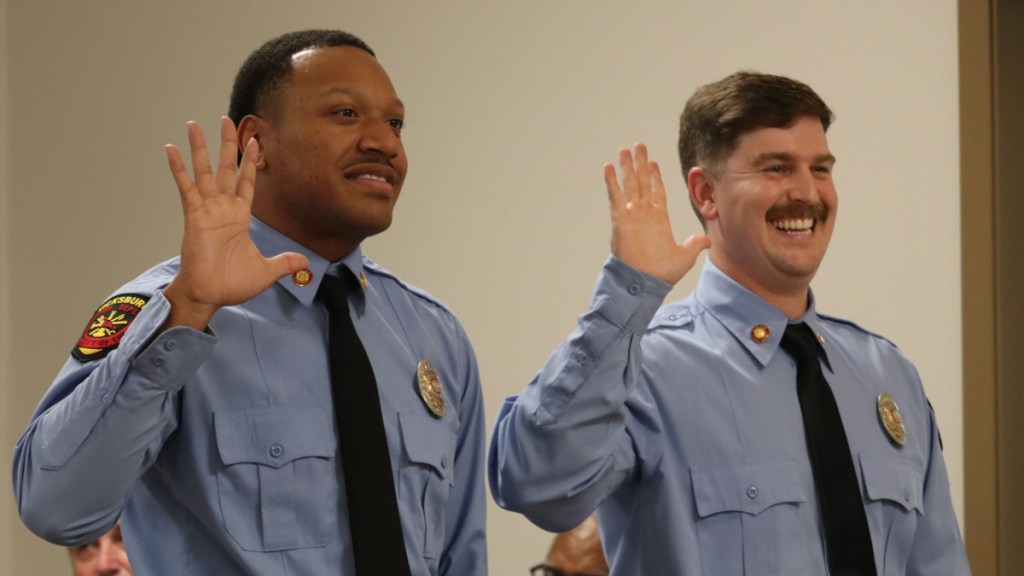 Vicksburg Fire Department Firefighters Elwin Johnson (left) and Jonah Masterson (right) at the pinning ceremony celebrating their promotion to the rank of lieutenant on Wednesday at the department Training Center on Old Mill Road. (Photo by Amari Caples | Courtesy of VTV)

The Vicksburg Fire Department held a pinning ceremony to celebrate the promotion of two firefighters to the rank of lieutenant on Wednesday.

Vicksburg Mayor George Flaggs Jr. was the first to speak after an invocation.

“You’re now leaders. You are leaders because you’ve been chosen and ordained to be leaders. And in this department, I know that there’s a creed, and there’s things that you already know, because you passed the test,” Flaggs said. “You passed that real test that allowed you to get this promotion, and then you passed that test where your colleagues selected you to, at this time and place, show and demonstrate that you’re leaders. I would encourage you, as leaders, to understand and embrace that leadership.”

Ward 2 Alderman Alex Monsour then took the opportunity to thank Johnson and Masterson for their work.

“We look for y’all for leadership in the community (and) public safety. And I just want to thank you for what you’re about to embark upon,” Monsour said. “And thank you to the guys and girls and everybody that’s already in our fire department and in our public safety.”

Fire Chief Derrick Stamps then spoke about the traditional pinning that was about to take place, which marks the two firefighters’ promotions.

“The traditional brass pinning is a celebration honoring those newly promoted,” Stamps said. “The brass that is presented is a symbol of the public’s faith and trust in the firefighter who wears the badge. And (that) they’re willing to make sure that all the citizens of Vicksburg are protected just as pioneers did before us.”

Masterson was the first to receive his new rank pin, which was fastened to his collar by his wife Hannah Masterson. Next, Johnson was pinned by his mother, Rosalyn Johnson.

After the pinning, the two firefighters stood side-by-side with their right hands raised to recite their oaths. Then each took the opportunity to address the audience.

“I just want to say to all my co-workers: thank y’all for leading the way that you have,” Masterson said. “All the captains and lieutenants that I’ve been under, y’all showed me how to be a good fireman, how to be a good EMT, and I really appreciate that and I know this job is not easy on families.”

Johnson also expressed his gratitude to his family.

After the ceremony, attendees took the opportunity to congratulate the two men on becoming the Vicksburg Fire Department’s newest lieutenants.