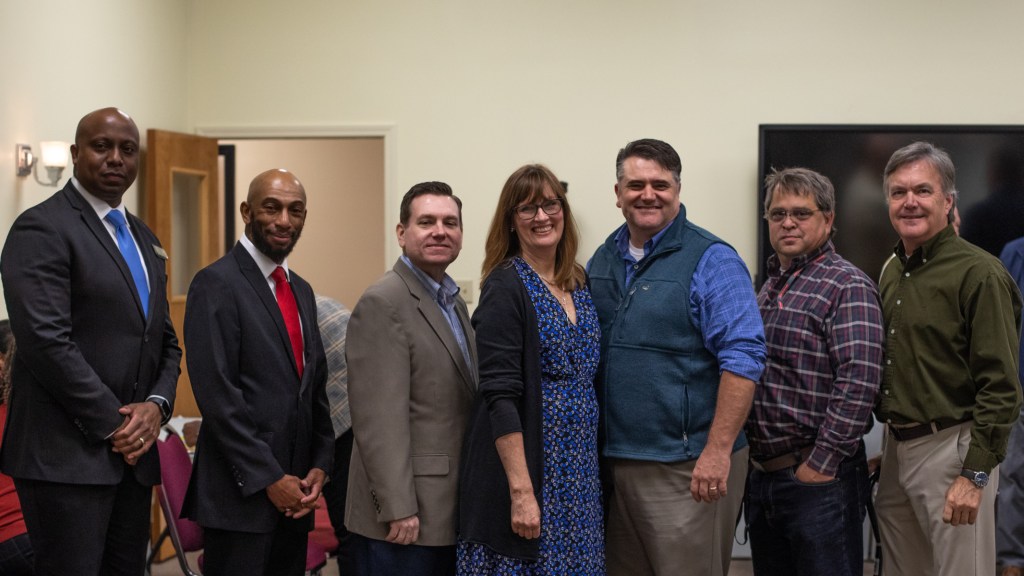 Sally Bullard, Trustee for District 5 of the Vicksburg Warren School District, was honored for her 12 years of service at a reception before the monthly board meeting on Thursday. Colleagues and community leaders spoke about her devotion to doing what is right for students in the district. Bullard decided not to seek re-election for the position this past November, making this her last board meeting as a trustee. (From the left: Cedric Magee, Associate Superintendent; James Stirgus, District 3 Trustee; David Campbell, Deputy Superintendent; Sally Bullard, District 5 Trustee; Chad Shealy, Superintendent; Brian Pratt, District 1 Trustee and Kimble Slaton, District 4 Trustee. (Photo by Ben Martin | The Vicksburg Post)

The Vicksburg-Warren School District (VWSD) Board of Trustees held its monthly meeting on Thursday.

Superintendent Chad Shealy took the opportunity to recognize outgoing District 5 VWSD Board of Trustee, Sally Bullard. Bullard has been on the board for 12 years and is currently the vice president. She did not seek reelection this past November.

“This will be her last board meeting with us,” Shealy said. “And I told her, she will forever be the queen of the Vicksburg Warren School District Board of Trustees, and we appreciate everything she’s done and the tough decisions that she’s made.”

A reception honoring Bullard and her service to the community was held prior to the board meeting, during which colleagues and community leaders spoke about her devotion to doing what is right for children in VWSD schools.

Mayor George Flaggs Jr. then presented her with a plaque recognizing her contributions.

Bullard then addressed the crowd that assembled to honor her work.

“This was the right decision for me to make,” she said. “I knew it was time; 12 years is a long time to serve on this board.”

Bullard took the opportunity to thank everyone that has supported the board’s efforts while she held the position.

“We’re just citizens until the five of us sit at that table. And that’s when the magic happens, or the disaster sometimes happens,” she said. “But we do everything that we can to try and make the right decisions for the kids in our district. And you guys have taught me so much. You’ve been really patient with me. And I thank you for always thinking with your heart.”

Bullard’s seat will be filled in the next board meeting by Joe Loviza, who won the District 5 seat in November.

Updates were also given at the board meeting by Jason Stewart and Mark Pipper of Bailey Program Management, LLC., on multiple construction and maintenance projects throughout the District.

One large project Pipper spoke about was the progress made on the agora at Warren Central High School, a large open space at the entrance of the school that is currently being constructed.

“I’d say that the big thing to note (is that) the structural steel for the agora is probably 98% complete,” Pipper said. “They’re primarily doing some of the smaller connections, welding those out for some of the trim pieces.”

District 1 Trustee Bryan Pratt asked about completion dates for the agora, to which Pipper replied that contractors are currently on track to have the project substantially completed by May 23 of next year.

Next, the Director of Financial Services for VWSD, Cassandra Lewis, gave the financial report for the district. The district funds as of November are $15,817,720.55. MAEP collections appropriations for November were $2,353,450, and casino revenue for October was $58,196.17.

One item that was passed during the Proposed Consent portion of the meeting was the approval to adopt a new policy that would allow the school district to store and administer Narcan, an opioid antagonist administered through a nasal spray that is used to reverse the effects of an opioid overdose.