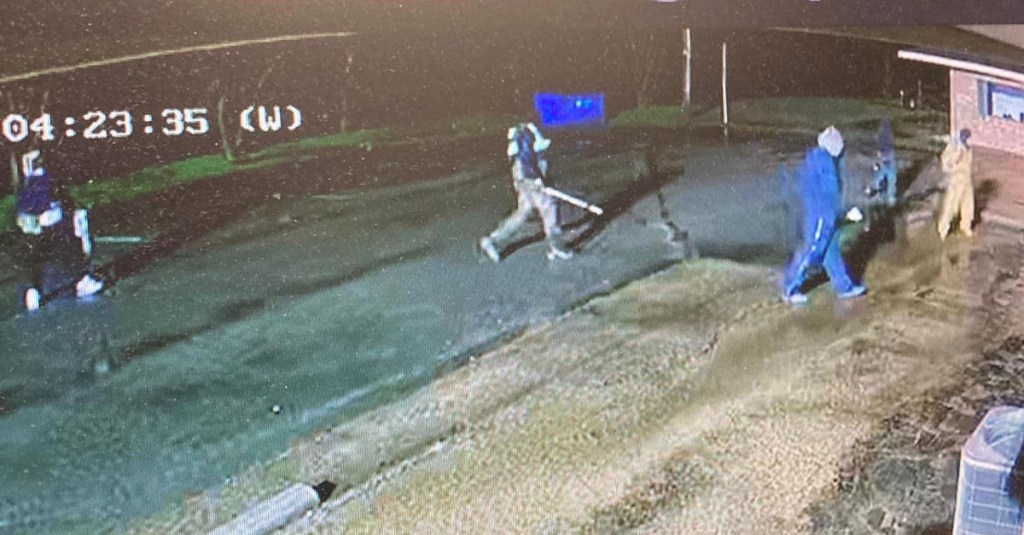 The individuals in this security camera photo are suspected of burglarizing Helping Hand Family Pharmacy on U.S. 61 North in Warren County. (Photo Submitted)

The Warren County Sheriff’s Office has released more details, based on reviewed security footage, on the suspects in the burglary that occurred at Helping Hand Family Pharmacy on Tuesday morning.

The office is currently looking for information on the whereabouts and identities of the five masked individuals who are considered suspects.

According to Sheriff Martin Pace, while reviewing security footage, deputies saw five fully masked individuals break into the pharmacy and took a yet undisclosed amount of pharmaceuticals. The pharmacy is currently doing a complete inventory to see exactly what items were stolen.

The suspects were last seen in security footage headed north on U.S. 61 on foot near the Culkin Road overpass. Investigators believe the suspects then used a black or dark sedan which was parked near the overpass to get away.

Also, in the security footage, one suspect appeared to be wearing a reflective blue police vest. However, it is not the same type or same color as those used by the Vicksburg Police Department, so it is unlikely that it was sourced locally.

Pace said that the five masked suspects broke into Helping Hand Family Pharmacy in the 1600 block of U.S. 61 North and committed the burglary at around 4:20 a.m.

Deputies reportedly responded within minutes after being alerted by the pharmacy’s security system and found that the business had been broken into; however, no suspects were at the scene.

The Sheriff’s Office is asking citizens to notify them if they recall seeing said vehicle or anyone matching the description of the suspects between 4 and 4:30 a.m. near the Culkin Road overpass on U.S. 61.

Those with information are encouraged to contact the investigations department of the Sheriff’s Office at (601) 636-1761. Alternatively, anyone with information on the suspects may also call Crime Stoppers of Central Mississippi at (601) 355-TIPS and may be eligible for a cash reward if the information provided leads to an arrest.

No suspects related to the robbery are in custody at this time.

More information will be provided by The Post when it is made available.