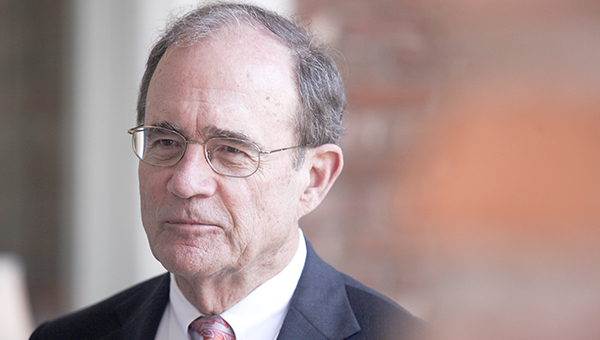 Citing the success of his first term, an active legislative agenda and a proposed tax rebate of more than $200 million, Lt. Gov. Delbert Hosemann said Thursday afternoon he is running for a second term.

“I’m asking to be rehired as Lt. Governor of the state of Mississippi,” Hosemann said in a Thursday morning interview.

“We’re very excited about the last three years and this year. We’ve been able to reduce the size of government, pay off almost $600 million in debt, raise teachers’ salaries, spent over $2 billion on infrastructure; just really some good positive things.

“We’re running Mississippi government like a business and I think we’ve got great potential going forward,” he added.

Hosemann first announced his re-election bid at the Neshoba County Fair in July 2022.

Looking at some major issues for the 2023 session of the Legislature, Hosemann said state revenue from individual taxation is $270 million more than the state budget projections, “and I’m proposing to send that money back to the taxpayers who sent it to us so, we’re going to propose a large rebate of $270 million.”

In education, he said a proposal to allow schools to operate through a modified calendar is under consideration, “And I expect you’ll see some work on that.”

A modified calendar, he said, means students go to school for nine weeks and they’re off for two to three weeks.

“That’s a decision made at the local level by parents and school administrators, but I want to have enough money for schools if they want to do a modified calendar and extend a little bit their session, that they have the ability to do so,” Hosemann said.

He also proposed allocating another $100 million for county roads and bridges.

“I think those are real important for people to get to work and school buses to get to school,” he said.

Locally, Hosemann said he wants to see the completion of the Levee Street extension, extending Levee Street from Depot Street to WaterView Casino as an alternate route for trucks going to and from the harbor, to keep 18-wheelers out of the downtown area. The city has received $3.5 million in state funds for the project.

“I think that would be excellent,” he said. “We’re very encouraged that they’re proceeding on to give another alternate way for trucks to go without going through much of our downtown area.”

He commended State Sen. Briggs Hopson III, R-Vicksburg, who is chairman of the Senate Finance Committee, for his work in getting funding for Vicksburg and Warren County.

“Sen. Hopson, who has been in appropriations, has been a great advocate for Warren County. He was able to get $5 million for the proposed (new) Riverfront Park. We’re anxious to see how the city and county spend that money.”

Besides the tax rebate and money for infrastructure, Hosemann said the Senate will also discuss tax reform, education infrastructure and strong criminal penalties for carjacking and other crime-related proposals.

Concerning tax reform, the House is expected to revive discussions about eliminating the state income tax.

“We’re looking at that,” Hosemann said. “We have reduced income tax — we’ll be the fifth-lowest state in the country on our income tax when it is fully implemented in 2026. I’m really proud of that.”

His main concern, however, is inflation and recession.

“I think we are either in or further in a recession. I want the state to be financially viable,” he said. “I think the best thing for us to do is look at our tax cards and probably in ’25 and ’26 and see where we are before lowering it further. At that time, we can see how the income is working and what the status of the state and inflation is.

“We have just given the largest tax credit in Mississippi history of over half a billion dollars, and I think we should absorb that before we start down the next road,” Hosemann added. “Eliminating the income tax would be a positive for us; I’m not opposed to that. I’d also like to lower the grocery tax. I think those will be on the table probably not this year but probably the next year and the next year.”

Hosemann said the state has other needs like rural hospitals and ports that are needed for economic development.

“We have to make sure we balance them,” he said.

He said the state has lowered taxes and shrunk the size of government by 3,000 employees.

“We’re shrinking government and paying off debt and getting into a position where we can lower taxes further. We have a very active agenda,” he said.