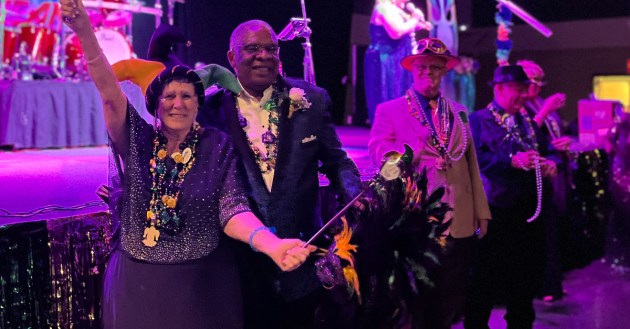 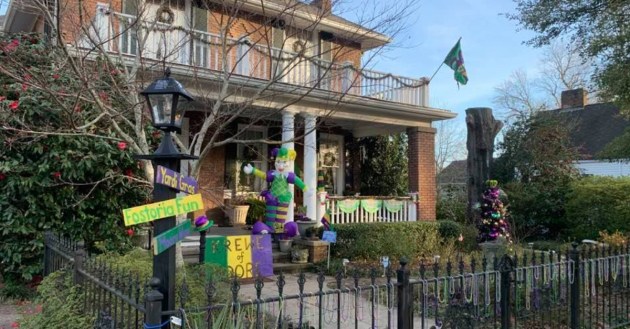 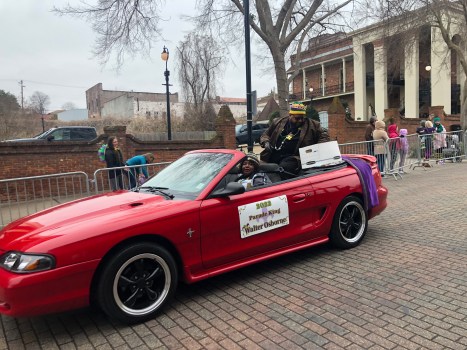 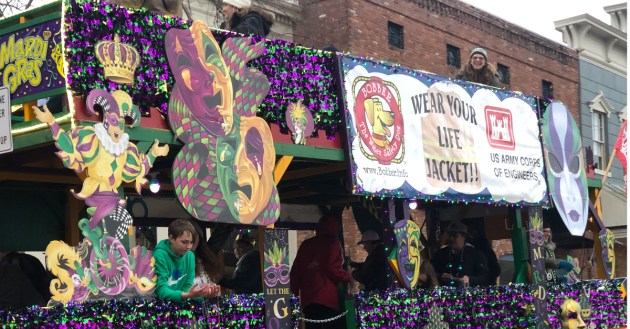 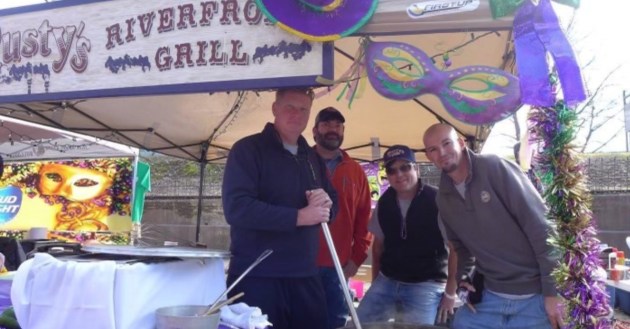 Members of the Rusty's RiverFront Grill Carnaval De Mardi Gras Gumbo Cook-Off team stir up their roux. Registration is underway for teams interested in competing. The event will be held on Feb. 18 at the Southern Cultural Heritage Center following the Vicksburg Mardi Gras Parade in downtown Vicksburg. (Photo submitted)

Mardi Gras season is filled with fun and festivities, and Vicksburg gets in on all the action with parties, parades and a plethora of entertainment.

So let the good times roll or for those who speak French, “Laissez les bon temps rouler,” with all the River City has to offer.

This year’s events will get kicked off on Jan. 29 when Vicksburg’s Fostoria neighborhood hosts the third annual Yardi Gras – a Mardi Gras parade in reverse and fundraiser, event organizer Launo Moore said.

“Instead of the floats going by and throwing things, people are going by giving donations to a non-profit and we (homeowners) in turn hand out beads and doubloons,” Moore said.

In the past two years, Moore said, donations have gone to the Storehouse Community Food Pantry and Friends of the City of Vicksburg Animal Shelter, respectively. The 2023 Yardi Gras will benefit Rainbow Farms Therapeutic Riding Center.

Yardi Gras will be held between the hours of 3 and 5 p.m.

The second annual Jester’s Ball: A Mardi Gras Masquerade, sponsored by the city of Vicksburg and the Vicksburg Convention Center, will crank up at 7 p.m. on Feb. 4 at the VCC, 1600 Dr. Briggs Hopson Jr. Blvd. The event will include food, musical entertainment by Southern Komfort and prizes given throughout the night. Tickets are $30 and are available at ticketmaster.com and the VCC box office.

Erin Southard, who serves as the executive director of the VCC, said a highlight of the evening will be the announcement of the 2023 Mardi Gras Jester. Nominees were submitted by a committee comprised of Southard, 2022 Jester Launo Moore, Ashley Dawson, Marian Richardson, Kimberly Smith, Walter Osborne and Kim Hopkins.

“These are people in the community who are doing outstanding work and doing things to better our community,” Southard said.

Voting is already underway for the 2023 Mardi Gras Jester, Southard said, and will continue until Jan. 31. To vote, visit https://lp.constantcontactpages.com/sv/Vqj5lvN/VicksburgJester.

The parade will feature festive floats and marching bands. And for revelers, get there early for a prime spot.

“Thousands of people come from all over to catch beads, dance and cheer as our elaborate floats and excited participants venture down the parade route,” Vicksburg Main Street executive director Kim Hopkins said.

Following the parade, the 11th annual Carnaval de Mardi Gras Gumbo Cook-Off will get underway. The event will run from 5 to 7 p.m. on Feb. 18 at the Southern Cultural Heritage Center, 1302 Adams St.

The event will include a Cajun Gumbo cook-off, live entertainment by Legal Tender with DeAnna Nicole and children’s activities. Admission is $10 for adults and $5 for children, which includes all kid’s activities.

For those wanting to compete in the cook-off to see how prize-worthy their recipes are, information and rules to enter can be found at Facebook.com/vicksburg.mardi.gras. All proceeds from the Carnaval de Mardi Gras Gumbo Cook-Off benefit the Vicksburg Foundation for Historic Preservation.