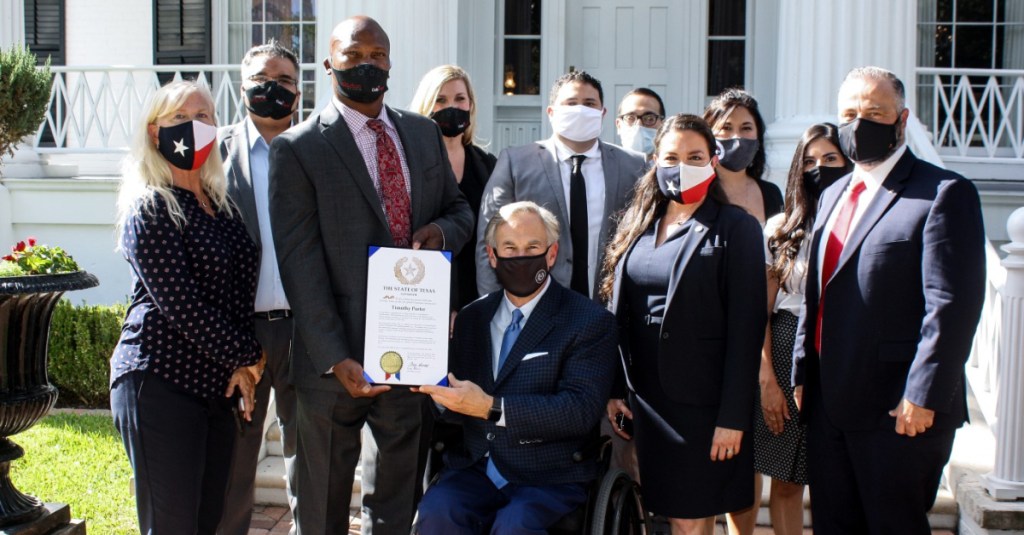 Vicksburg native Tim Porter, now a resident of San Antonio, Texas, was presented the National Small Business Person of the Year Award by Texas Gov. Greg Abbott this past October.

Porter is the founder and CEO of Appdiction Studios, LLC, a business that develops apps, including one for students to report acts of aggression. He was also presented with a proclamation from the State of Texas by Abbot in recognition of his achievements.

“I am proud to join the SBA in recognizing Tim Porter as the National Small Business Person of the year,” Abbott said. “Tim embodies the entrepreneurial spirit, and his journey from a small start-up to the CEO of a thriving business is truly inspiring. It’s because of small business leaders like Tim that the state of Texas continues to foster an environment that encourages entrepreneurs to innovate and grow their businesses. On behalf of the state of Texas, I congratulate Tim on this tremendous and well-deserved honor.”

Porter, who grew up in the Melinda C. Robinson Circle subdivision — the first African American subdivision in Vicksburg — began his career in the U.S. Army and during his nearly 10 years of service as an Army Ranger served as a paratrooper, jumpmaster, drill sergeant and sergeant first class. In 1998, that all came to an end when a bomb exploded in Porter’s hand during a training session at Camp Casey in South Korea, causing him to lose most of his fingers. After becoming medically retired, Porter began his search for a new profession and landed in the information technology field.

For 15 years, Porter, with the help of friends and by reading books and watching tutorials, taught himself how to develop apps, web-based applications, management consoles and application-based software product design.

In 2011, after receiving help from assistance from the Small Business Association’s Small Business Development Center at the University of Texas at San Antonio, Porter formed Appddiction Studios.

Porter’s business has since established itself as the go-to small business for the Department of Defense to support new and existing enterprise transformations for DoD clients.

Also, the first app Porter and his team at Appddiction Studios created, Stop Bullies, was highlighted on the USA Network television channel as one of their USA Character Unite Award winners for developing an award-winning anti-bully mobile application for use in K-12 schools.

The Stop Bullies app allows students who witness bullying to anonymously and immediately send a text description, picture, video or voice recording of the incident to school administrators via a smartphone or tablet PC. The app is managed and stored on the school district’s computers and although it is an anonymous message, there is the opportunity for two-way communication as needed, specifically when it applies to suicide reports and similar events.

Vicksburg Mayor George Flaggs Jr. said he was informed of Porter’s award by a colleague in Texas. Although Flaggs said he did not know Porter personally, he said he did request he is notified if Porter makes a visit back to his hometown.

“We would want to recognize him (Porter),” Flaggs said, because it is always good when people who grew up in Vicksburg and have moved away can still be recognized by their hometown community.

In addition to running Appddiction Studios, Porter also sits on the board of the Health Collaborative in San Antonio.