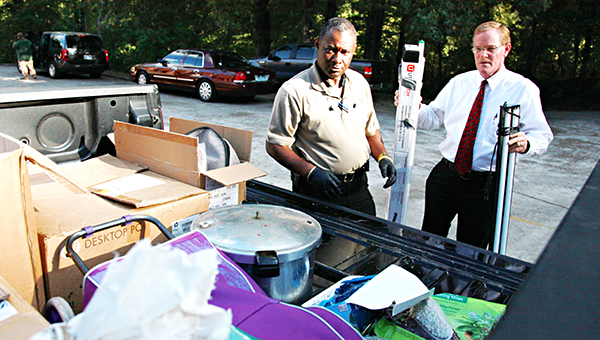 A Warren County man was held without bail Tuesday after deputies searching his apartment in a burglary case found a psychedelic mushroom farm.

Deputies and narcotics agents recovered 88 jars containing the sprouting mushrooms, Pace said. Each jar has the potential to produce about a pound of mushrooms.

“The psilocybin mushrooms were popular in the ’60s and ’70s. This is not something we see a lot of now,” Pace said. “We don’t have a lot of contact with the mushrooms and certainly have not seen the grow operations in this area. We’ve never had one in my 35 years.”

The bust appeared to be one of the biggest in the stage in decades.

“Neither the Mississippi Bureau of Narcotics agents or federal DEA agents I have consulted have seen a grow operation like this,” Pace said.

Deputies and narcotics agents hauled out several boxes and bags containing the jars of psychoactive mushrooms and loaded them into a truck Monday afternoon to be taken to the sheriff’s office as evidence.

The Drug Enforcement Administration lists psilocybin mushrooms — commonly referred to as magic mushrooms — as a schedule I controlled substance, meaning they have no accepted medical use and a high potential for abuse. Other schedule I drugs include heroin and LSD.

Primeaux was investigating a burglary call at the apartment complex when he developed Jobe as a suspect and obtained a search warrant for his apartment.

“During the course of the search warrant, they came across the mushroom grow operation and recovered items stolen in the burglary including a violin,” Pace said.

Two guns stolen in the burglary were also recovered in Jobe’s apartment, Pace said. After the mushrooms were discovered, deputies called the Mississippi Bureau of Narcotics which sent an agent to assist in the investigation.

“We called for them because this is so uncommon,” Pace said. “This is not something you see regularly.”

The investigation is continuing, and additional arrests are expected, Pace said.

Jobe was held without bail in the Warren County Jail awaiting an initial court appearance set for Tuesday.