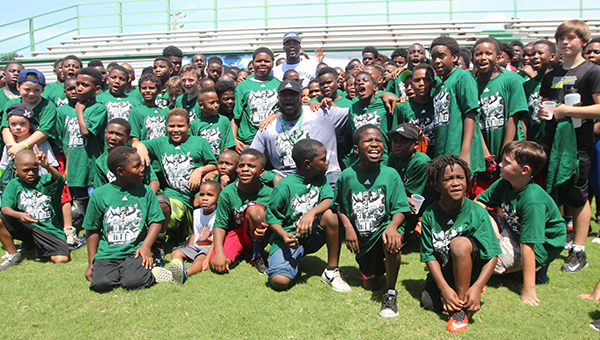 Vicksburg native Malcolm Butler of the New England Patriots smiles with his 200-plus campers at the conclusion of his second annual football camp at Vicksburg’s Memorial Stadium Saturday.

At the end of his football camp, Malcolm Butler addressed the kids with a message: be successful through a sturdy work ethic and a positive attitude.

Butler let his campers know that sports aren’t everything in life while also stressing the importance of an education.

“You always do the right thing, you always want to take care of yourself the right way,” he said. “Go to school, do your work and through it anything is possible. Any one of y’all can be me right here. As a matter of fact, somebody’s going to make it, that’s just how it is. Work hard at what you do.”

Once inside, they were greeted with musical selections from Jackson State University’s Sonic Boom marching band, Frankie Beverly and Maze, and Bruno Mars over the stadium’s speakers as they received commemorative T-shirts, visors and shoes.

Butler’s interaction with his campers began the moment the camp opened with a prayer until his final speech about hard work.

As he spoke with media, his head swiveled when he heard cheers from a station because he wanted to see how well his campers were doing. He shook hands with his campers as they warmed up, dished out advice to his older campers during 7-on-7 drills, and even played some slight defense against some young receivers.

The Vicksburg High football coaching staff, players and former athletes led the way in stretching, 7-on-7 drills, obstacle courses and conditioning stations spread out on the field.

“Just him giving back to the kids is always great thing in your own community,” Vicksburg football coach Marcus Rogers said, adding it was fulfilling to see the enjoyment of the campers. “They have all types of goodie bags they’ll leave with today. That’s always a good thing for our youth, trying to make and difference and get them to do positive things.”

Terrell Smith, a 2014 VHS graduate and Kansas State track athlete volunteered at the camp and noticed how the campers amplified their efforts in drills when Butler was watching.

“Their faces are enlightened when he comes by his presence,” Smith said. “When he comes over, I see them get a lot more energy, and become faster and quicker. He’s hands on, he goes right into their face and tries to make sure they get everything done.”

The 200-plus excited faces would not have been possible with the tiresome dedication to Cynthia Bell, who has been at the forefront of orchestrating the camp. She contacted Butler after the AFC Championship game against the Denver Broncos and got the wheels rolling this year’s camp.

“After that game, we let him settle down for a couple of weeks,” Bell said. “We got the call and said ‘Ok, lets get on it. We’re going to do it.’ Once we decided we were going to do it. The second thing I needed to know was a date.”

Between February and April, dates were tossed around. Bell originally planned to hold the camp in June, but Butler’s schedule conflicted pushing to date back to the weekend of the ESPY’s.

In her second year assembling the program, Bell went through a stressful experience making sure every aspect of the camp was covered from catering to the delivery of T-shirts and shoes, and rounding up sponsors.

However, Bell was able to find some relief when the camp began.

“That’s what it’s all about, that they smile and are having a good time. They’re seeing an NFL football player from their hometown and he’s giving back tremendously with everything he’s done,” Bell said. “He’s really given back and has allowed me to assist.”