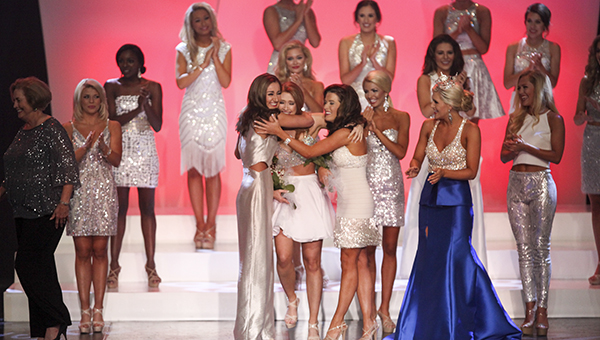 The final night of the Miss Mississippi Pageant preliminaries came to a close Friday and again for the third night in a row, there was a tie in the talent phase of the competition.

May, who performed a vocal rendition to the Animals 1964 hit tune, “House of the Rising Sun,” said she was shocked and overwhelmed when she heard her name called.

“I am feeling disbelief, shock, happiness, joy, lots of happy adjectives,” May said.

To prepare for the performance, May said she prayed and practiced a lot.

“I have a wonderful roommate who lets me sing at the top of my lungs in our room, and she just sings along with me so that made it a lot easier,” she said.

May performed the same song in the 2016 Miss Mississippi Pageant and said she enjoys performing this song because she gets to feel like she is somebody else.

“I get to be more of an edgy rough kind of person, and I think that’s what performing is all about. You get to tell a story,” she said.

Bullock said she too was overwhelmed with excitement when she heard her name called as a talent preliminary winner.

“I have played piano for over a decade now and I have been teaching for three years and this is just a rewarding moment for me,” Bullock said.

For the competition, the University of Southern Mississippi student played her “Tarantella” by Pieczonka on the piano.

“I come from a family of musicians, and this is very special for me to play, and I worked on it for seven years,” she said.

Bullock said she always tries to practice at least 20 to 30 minutes a day, but there are times when she will practice one to two hours a day when preparing for a performance.

Both May and Bullock were each the recipient of a $500 scholarship.

Harrington, who was the recipient of a $400 scholarship after winning in swimwear, is a double preliminary winner.

During the Wednesday night preliminary she tied with Miss Meridian Tanner Fant in the talent phase of the competition.

“I am so overwhelmed, shocked and blessed to have been given this award. I have worked very hard over the past year and have tried to make it a commitment from the moment I stepped off the stage last year to be at my best, physically, Bullock said.

To achieve her goal, the University of Alabama at Birmingham student said she modified her diet and spent a lot of time in the gym.

“I have learned to love to work out,” she said.

The final preliminary competition will be held at 8 p.m. tonight at the Vicksburg Convention Center.

A composite score from the three preliminary competitions in talent, swimwear, evening wear, on-stage questions and off stage interviews will determine who will be in the top 10, which will be announced at the beginning of the final competition Saturday night, and the 2017 Miss Mississippi will be crowned.

All tickets are sold out to the pageant, but Saturday night’s final competition and crowning will be televised on WLBT, and it will be live streamed on the Miss Mississippi website. The Vicksburg Post will also be posting photos from the pageant on each of its social media outlets.

Another tie in Miss Mississippi preliminaries