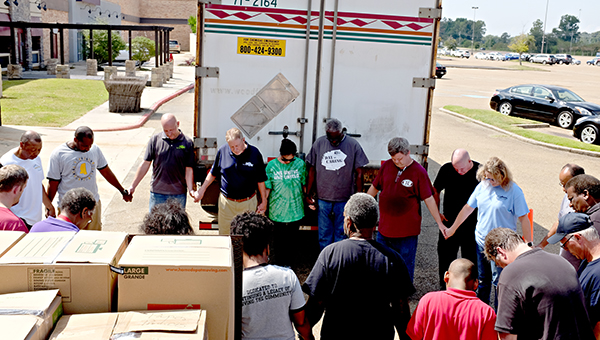 Friday afternoon, an 18-wheeler filled with donated supplies left the parking lot of Vicksburg Mall on its way to Houston, Texas, where it was expected to arrive Friday evening.

“We sent out a list of items that people could purchase from and people poured out to us and fulfilled the list,” Tonya Naylor of the Randy J. Naylor Foundation said. “A lot of individuals came by, but the local businesses were used as our satellite locations. They let their employees know and they supported us that way.”

Tonya and her husband Randy J. Naylor Jr. live in Houston, but are Vicksburg natives, and when the storm was preparing to hit they evacuated to Vicksburg. They were then able to rely on their hometown to help with the recovery in their adopted home of Houston.

“We were going through what you call survivors guilt,” Tonya said. “We evacuated and a lot of friends didn’t. We are sitting on our coach and crying and thinking about our friends and we were like what can we do while we are safe to help our friends and family who are back there.”

Donation sites were organized throughout the city of Vicksburg with the central location being the old Playland at Vicksburg Mall. The United Way served as the fiscal agent and collected the monetary donations, of which Tonya said there were between $5,000 and $6,000.

“It makes me proud,” Tonya said. “I am a Mississippi girl at heart. This is the one place I have to return to. I’ve lived all over the United States, but Vicksburg, Mississippi is home. It feels good to come home and have your family rally around you and when I say family I mean the city. Here is a Mississippi girl and boy who were trying to do something good and they put their arm around us and helped us.”

The 18-wheeler left Vicksburg mall around noon Friday and was expected to arrive at Dobie High School in Houston later Friday evening. From there, the donations will be spread out to areas in need.

“Dobie High School is in the middle of it because it became a Red Cross Center,” Tonya said. “From Dobie, other locations are coming to pick up their items. It is going right smack-dab in the center of Houston. That area was really hard it.”

Tonya said the amount of donations they received far exceeded their expectations when they originally set out to help Houston.

“We were hoping to maybe get the biggest U-Haul truck. We almost filled an 18-wheeler,” Tonya said. “A lot of individuals came by, but the local businesses were used as our satellite locations. They let their employees know and they supported us that way.”

The Warren County District Attorney’s Office is getting an extra hand. Vicksburg resident and in her last year at Mississippi... read more