One killed in early morning crash 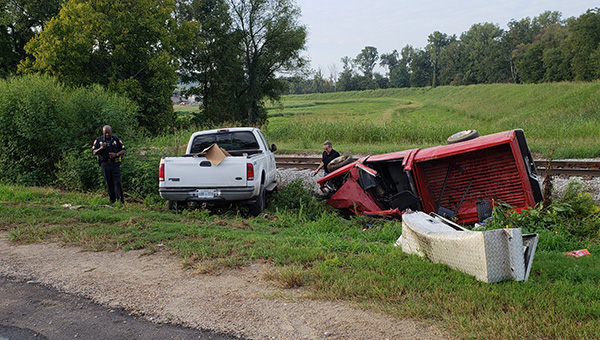 A fatal crash this morning between two pickup trucks claimed the life of one person. Here coroner Doug Huskey and a police officer survey the scene. (John Surratt/The Vicksburg Post)

A Vicksburg man was killed early Tuesday morning when his pickup and another pickup collided head-on on Haining Road.

The wreck occurred about 7:25 a.m. Tuesday. Vicksburg police Sgt. Bobby Jones said Michael Owens, 28, was killed when the Ford F-250 he was driving pickup collided with another F-250 driven by Michael Bailey, 32. Bailey, Jones said, was westbound on Haining Road and was attempting to pass an 18-wheeler when he collided with Owens, who was eastbound. Owens was pronounced dead at the scene by Warren County Coroner Doug Huskey. Bailey was treated and released from Merit Health River Region.

Firefighters had to use the Jaws of Life to remove Owens from the truck, which was lying in a ditch on the south side of the road. The wreck remains under investigation.