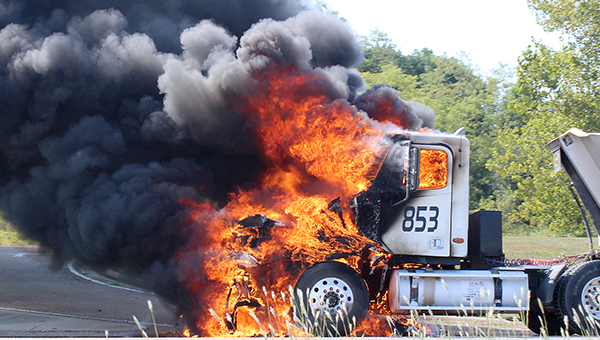 A truck, which appeared to be carrying gravel, was consumed in flames Friday afternoon as it traveled south on U.S. 61 North. The driver was able to escape without injury. (Tim Reeves | The Vicksburg Post)

A Terry man is fortunate to have escaped injury Friday after the truck he was driving suffered a major malfunction and was consumed in flames.

The driver, who asked not to be named, said the “turbo in his truck went out” and that white smoke began to billow from the engine as he traveled south on U.S. 61 North.

He was able to safely pull the truck onto the shoulder across from Merit Health River Region hospital and escape without injury.

The Culkin Fire Department responded around 3:15 p.m. and was able to extinguish the blaze. Traffic along the busy thoroughfare was slowed during the incident, with southbound traffic being diverted onto Sherman Avenue.