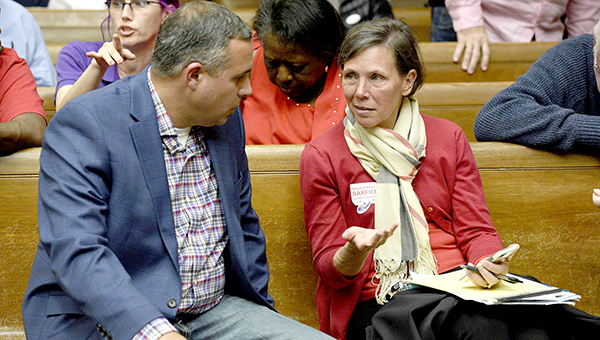 It came down to the final precinct reporting to make it official, but in the end, Kelle Barfield pulled out a convincing victory Tuesday evening, knocking off incumbent District 5 supervisor Richard George and fellow challenger Carl Campbell.

The unofficial totals gave Barfield a 748-vote victory over George, earning 57 percent of the vote in the district race.

In a brief comment after the results were announced, George said, “I’m done.”

Barfield said her election and the significant turnover on the Warren County Board of Supervisors is a sign of hope for the county. Barfield, Shawn Jackson and Ed Herring all won Supervisor seats for the first time on Tuesday. The District 4 race between Jeff Holland and Marty Crevitt was still too close to call, but both candidates were also running for a first term.

Barfield earned 1,853 votes compared to George’s 1,105 votes. Campbell earned 305 votes. The totals were unofficial and do not include absentee votes.