Portion of Highway 80 closed due to major erosion issue 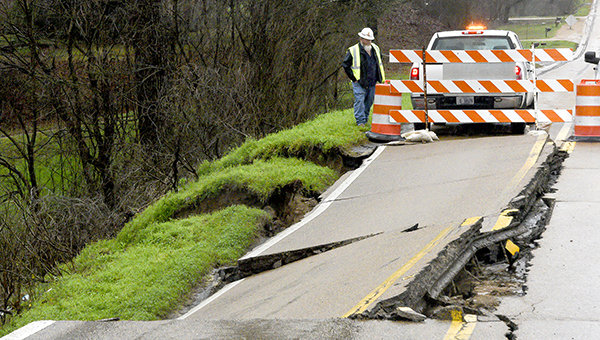 A heavily-traveled road in Warren County is cut off this morning following serious erosion that developed overnight.

According to Warren County Sheriff Martin Pace, the 1700 block of Highway 80, between the cement plant and Mount Alban Road is blocked after the road became unsafe to travel late Monday night.

“The way our maintenance engineer explained to me, is there is a lot of water that runs down Highway 80, and it was so much that it blew out the shoulder and some of the road and caused the roadway to fail,” MDOT’s Mike Flood said.

Pace said deputies arrived at the scene after the first calls came in about the road around 10:30 p.m. Monday. Crews with MDOT arrived later to erect barricades and detour signs to fully reroute traffic.

“We have already been in contact with transportation officials with the Vicksburg-Warren School District. They are aware of the detour,” Pace said. “Also, 911 has reached out to the fire departments, ambulance service and law enforcement. We know exactly what addresses we can reach traveling eastbound, and what addresses we will need to reroute through Culkin.”

Flood said the full scope of the damage is not yet known and any timeline for repairs will depend on just how much damage there is.

“Although one lane affected MDOT had to shut down the entire road because we cannot have traffic use that way at all until it’s deemed safe,” Flood said. “We’re trying to identify how much of the roadway was affected by it. We’ve got our engineers on the scene now. With section loss, it’s a major repair.”