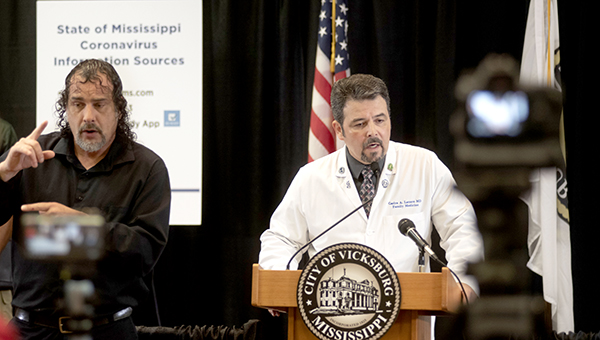 Dr. Carlos Latorre, a Vicksburg physician and member of the state’s COVID-19 task force, speaks during a press conference Sunday at the Vicksburg Convention Center to update local efforts to slow the spread of the COVID-19 virus. (Courtland Wells/The Vicksburg Post)

More restrictions have been added to the city’s Civil Emergency Declaration affecting daycare centers and other businesses and requiring city employees and their families to report any contact with someone who tested positive for COVID-19.

The restrictions announced Sunday by Mayor George Flaggs Jr. went into effect at noon Monday. They require daycare centers, barber and beauty shops, nail and tanning salons and spas to close for one week. The city’s 11 p.m. to 5 a.m. curfew remains in effect.

The first two nights of the curfew, Vicksburg Police Chief Milton Moore said, “We were mostly giving out warnings because the curfew was somewhat new, but the last couple of nights, we have been giving out citations and the fine is up to $1,000 plus 90 days in jail.

“We are going to strictly enforce this curfew; zero tolerance,” he said. “We have to stay safe and we plan on keeping this community safe. If you are not going to or from work and it is not an emergency, you probably will get a citation to appear in court for violating the curfew.”

The new rules are amendments to Phase 2 of the emergency declaration involving COVID-19 precautions approved March 25 by the Board of Mayor and Aldermen. They come in the wake of Warren County’s first confirmed case of the virus involving a county resident who tested positive for the virus.

“This is one of the hardest things I’ve ever had to do in my 32 years of politics, and that is being able to have to share with you today what we have to do, we must do, if we’re going to end this,” Flaggs said before announcing the new restrictions.

If the city is going to reduce exposure to the virus, he said, “It is absolutely critical that we do this.”

Flaggs said the declaration was amended to mirror the county’s emergency plan.

The additional restrictions include:

• All daycare centers will remain closed until April 6.

Lou Coleman, who is the owner of Kiddie Kollege, closed down her daycare center March 13, prior to the Mayor’s declaration.

Coleman said she was still trying to pay her employees, because she knew they had financial obligations.

As for parents, Coleman said, she has had calls from parents who don’t have anywhere to take their children.

“I have some parents who do work in the medical field and so that puts a hardship on them as well,” she said. “It has been challenging, but I have to let them know this is out of our hands. It’s in the Lord’s hands.”

The closures will be evaluated before April 6, Flaggs said.

• People will not visit hospitals, nursing homes and retirement homes or long-term care facilities unless to provide critical assistance, visit residents receiving imminent end-of-life care, or as otherwise directed by the healthcare facility, provided in the professional opinion of the supervising physician or another supervising healthcare professional at such facility that such visits can be accomplished without unreasonable risk to staff or other residents of such facilities. In lieu of in-person visits, electronic visits are encouraged.

• The citywide curfew was amended to allow those traveling to work at a business that is open, such as a grocery store or gas station. First responders and law enforcement are also exempt from this curfew.

• Liquor stores will have no more than 10 people, including employees, inside at any one time.

• Barber and beauty shops, nail and tanning salons and spas will remain closed until April 6. The restriction will be evaluated on or before April 6.

“To be honest, I could cry,” Southern Barber and Style co-owner McMillian Crevitt said. “I just like being in a routine, and I love seeing everybody every day.

Prior to the restriction, Crevitt said, they were taking many precautions that included wearing gloves, using hand sanitizer and spraying down the barber chairs before and after each client.

“As far as social distancing, we were staying as far away as we could, but you are still washing their hair and stuff like that,” Crevitt said.

While this is a hardship on the business, Crevitt said, she does think the restriction is protective.

“I do hate it and we are up here making all these phone calls to everybody, but in another way, I am thankful for it because I would be devastated to lose one of my customers or one of my friends due to coronavirus,” she said. “So I completely understand it and am thankful for him making the decision.

“But in the same sense, I hate it, but it is best for the clients and us — to make us safe.”

• Any city public meeting or public gathering in a city building is limited to 10 people and social distancing will be observed.

• Any city employee or family member in their household who comes in contact with a person who tested positive for the COVID-19 virus should report to Steve Williams, the city’s safety director of the city’s human resources department. The policy will be re-evaluated after April 13.

• Meals for senior citizens 65 and over, vulnerable adults and handicapped adults, will continue at the Salvation Army Monday, March 30 and Tuesday, March 31, for curbside pick-up, and at the Vicksburg Convention Center Wednesday, April 1 – Friday, April 3.

Curbside pick-up will be available at these locations between 11 a.m. and 2 p.m. A photo ID confirming 65 or older must be provided.