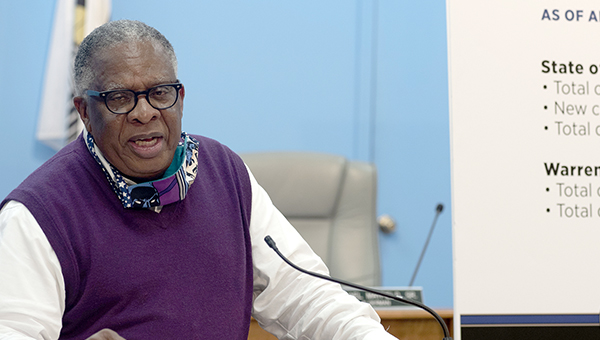 While state and federal officials continue to discuss and debate stimulus plans, municipalities like Vicksburg continue to flounder in an economy brought to a halt by the COVID-19 pandemic.

Early last week, Mayor George Flaggs Jr. and city officials itemized nearly $3 million in projected revenue losses. They not only discussed the losses, but drastic steps the city might be forced to take — especially making deep cuts to the city’s personnel numbers — to in some way offset the loss of revenue tied to sales taxes and the currently shuttered casino industry.

But that was last week, and those possible solutions might not be enough.

Thursday, Flaggs said the losses have continued to mount, while the options to keep from significantly cutting city services have started to narrow, especially if stimulus money from the state and federal governments is further delayed.

One option at the disposal of Flaggs and other city leaders throughout the state is bankruptcy, particularly Chapter 9 bankruptcy.

“It is an option. It is a progressive option,” Flaggs said. “What do you do when you want to protect your assets and make sure you have enough flexibility to move around so that you can make the best decisions for the city? To lose the kind of revenue that we have lost has not happened in the history of this state.”

Flaggs said that cancellation and the loss of sales tax revenues connected to participants, along with friends and families, not coming to Vicksburg has since raised the projection of lost revenues to $3.5 million.

Flaggs said he is not ready to move ahead with bankruptcy just yet.

“I have not spoken to anyone in the city about Chapter 9. I haven’t gotten a legal opinion or talked with anyone. I just know as a former legislator the options that are available to municipalities when you are under dire financial stress,” he said. “I am not just speaking for one city, I am speaking for all cities. This is nothing like Katrina. Katrina — and other incidents — was isolated. I don’t know a city or county in this state that has not been devastated by the loss of revenue.”

According to U.S. bankruptcy law, Chapter 9 bankruptcy is a reorganizational option for municipalities and school districts that allows “a financially-distressed municipality protection from its creditors while it develops and negotiates a plan for adjusting its debts.”

“It protects the city from its creditors and allows you the opportunity to move money around, refinance, restructure so you can not have to reduce services,” Flaggs said. “That is probably the last thing you would ever want to do in government, but it is an option; so too is tapping into the reserve fund, laying off people, moving to 32-hour work weeks and furloughs.”

Flaggs knows discussing the option of bankruptcy is a shock to some, but he said it is vital for everyone to know just how serious this matter is.

“I am trying to convey to the Legislature that this is a very serious issue and the Legislature’s responsibility to step in and help us,” he said. “We have casinos that are closed, we have tourism, our economy is based on revenue from tourism. We have a local 2 percent sales tax on our hotels and restaurants to fund our sports complex. You don’t think we have been impacted?”

Even though bankruptcy is an option, Flaggs is confident today that it will likely not be needed and that state and federal governments will act.

“I feel confident the Legislature and that the federal government will help us by way of the White House and the Congress,” Flaggs said, adding that on Monday he presented a letter to Lt. Gov. Delbert Hosemann, Speaker of the House Phillip Gunn and Gov. Tate Reeves outlining the city’s itemized and projected revenue losses. He also said that, since Monday, Hosemann had followed up to get updated lost revenue figures and other expenses related to the losses.

Flaggs admits, though, that even if the city and other municipalities get stimulus money from state and federal governments, that it will not be a long-term solution. “It will get us out of this fiscal year,” Flaggs said.

“I am trying to minimize the cost without devastating this local government or reduce any services,” he said. “This pandemic was not a result of anybody’s mistake and the Congress and the Legislature have got to understand and they have to do something. I am confident we are going to get there.”