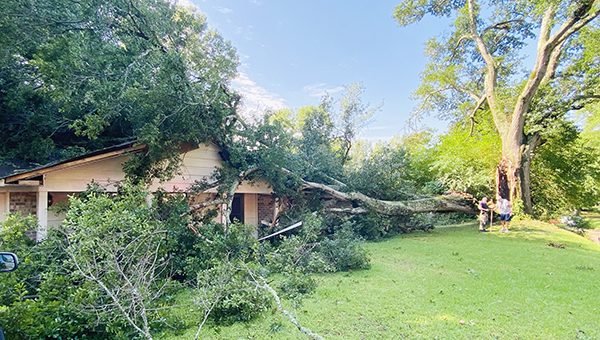 This home on Longwood Drive, owned by Garland and Linda Cary, was severely damaged Wednesday morning when part of an oak tree collapsed on the home. Linda was injured by debris as the tree broke through the roof. (Tim Reeves/The Vicksburg Post)

A Vicksburg woman was transported to the hospital after a tree fell on her home Wednesday morning.

Garland Cary said he thought lightning had hit the house when an oak tree split and crashed into his home on Longwood Drive. The next sound he heard was a cry for help from his wife, Linda.

Half of the tree, which appeared to be hollowed out by rot, collapsed on the home and crashed through the living room and a bedroom where Linda was still sleeping.

After the sounds of the crash had subsided, Garland said he then heard cries of “I’ve been hit, I’ve been hit” from Linda, still in the bedroom. He said he made his way to her and saw where she had been hit by falling debris and possibly from some of the broken rafters.

Emergency medical teams from the Vicksburg Fire Department responded and transported Linda to Merit Health River Region for treatment. The extent of her injuries was not known.

“All I saw was sheetrock falling when the limbs came down in the living room where I was sitting at the time,” Garland said. “Stuff just started popping everywhere.”

As for what could have been a far worse outcome for the couple, who have called the Longwood Drive property home since 1985, Garland said, “Thank the Lord. He has blessed us.”

Garland said the couple does have family in the area and he was contacting his insurance company immediately to begin the process of rebuilding.

JACKSON (AP) — A proposed teacher pay raise has died at the Mississippi Capitol because of budget concerns during the... read more